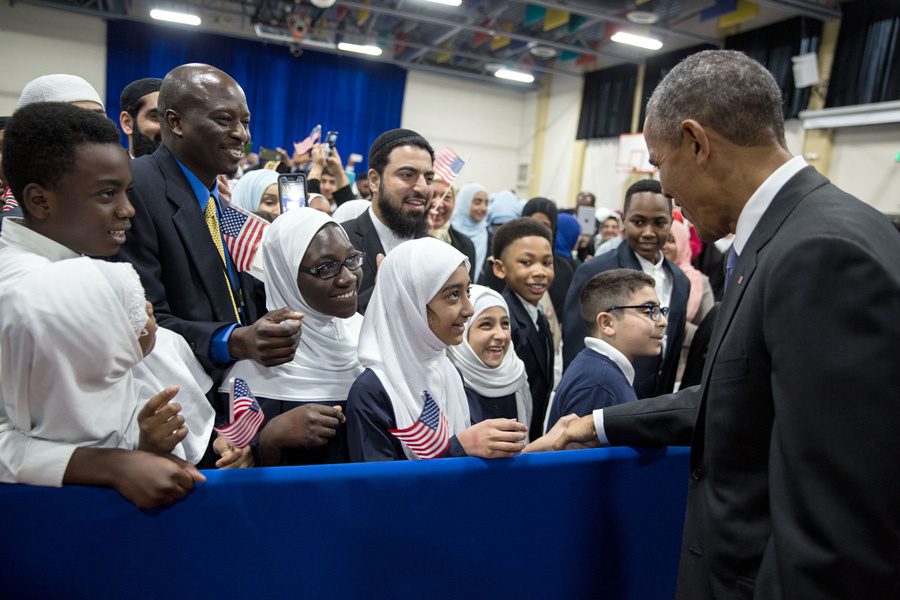 As the days of the Obama Administration near their end and cute photo collections and videos of the president’s relationship with kids are shared on social media, here is a closer look at some of his administration’s policy legacy when it comes to Muslim children [Editor’s Note].

Nearly fifteen years of the War on Terror may not have led to any appreciable decline of terrorist groups but they certainly have resulted in the US government coming up with some uniquely comical ideas on how the war should be fought. The State Department once spent millions of dollars for its Center for Strategic Counterterrorism Communications division to troll Islamic State accounts on Twitter. Earlier this year, the State Department offered a $1.5 million grant to produce a “television drama series” aimed at “countering violent extremism among young people in contemporary Afghan society.”

One of the more recent ideas, however, is more frightening than funny. The FBI’s strategy for Preventing Violent Extremism in Schools aims to recruit teachers and school officials to monitor students for signs of radicalization. The criteria for what may constitute radicalization may as well be designed to facilitate racial and religious profiling and quash political dissent. It includes those who criticize US government policies, have qualms about “western corruption,” use “code word or unusual language,” and travel to “suspicious” countries. It also reinforces the mistaken belief that there are reliable indicators which may help predict who becomes a violent extremist.

The FBI’s strategy came under immediate fire for instructing teachers to effectively “act as puppets of federal law enforcement” and using the threat of terrorism to “justify a massive surveillance apparatus.” A coalition of 14 civil liberties organizations pointed out to FBI Director James Comey that the Bureau’s strategy “perpetuates profiling and negative stereotypes that Arabs, Sikhs, South Asians, Muslims and those perceived to be Muslim are prone to engage in extremist violence…”

Muslim students already face abuse and bullying in schools and the FBI’s strategy is likely to exacerbate this trend. In a study published last year, the California chapter of the Council on American-Islamic Relations (CAIR-CA) reported that 55% of American Muslim students it surveyed admitted being subjected to “some form of bullying based on their religious identity,” a rate that was twice as high as the national average.

In addition to the threat of bullying, the FBI strategy also compromise the trust teachers strive to cultivate with students as well as teachers’ attempts to encourage original and creative thinking in students. As Congressman Bennie G. Thompson (D-MS) warned in a letter to Attorney General Loretta Lynch, having teachers participate in the FBI’s strategy may “chill relationships with students or, for that matter, undermine a supportive learning environment.”

These concerns are not merely theoretical. The FBI’s strategy is modeled after UK’s Countering Violent Extremism (CVE) program known as Prevent. Since the British Parliament passed the Counter-Terrorism and Security Act in 2015, public sector workers such as teachers and doctors have a statutory duty to identify students and patients at risk of violent extremism and report them to Channel, the government’s deradicalization program. Some recent reports on Prevent illustrate the problems the FBI’s strategy is likely to encounter and the impact it will have on students and teachers.

A survey of 507 social workers carried out by the Children and Family Court Advisory and Support Service (CAFCASS) found that more than 40% were “unconfident about being able to assess an individual’s vulnerability to being drawn into terrorism.” This is no shock since academic studies suggests there are no reliable indicators which can help predict who will become a violent extremist. A subsequent analysis by CAFCASS of 54 family court cases involving radicalization confirmed that “it is not possible to create a profile of children at risk of radicali[z]ation.”

This flawed methodology has resulted in some pernicious effects, as delineated by a recent report by Rights Watch UK. The report assessed that Prevent stigmatizes Muslim students, stifles creativity and free expression, interferes with the right to education, undermines privacy, and may actually promote the very extremism it seeks to curb.

A few examples highlighted by the report provide a snapshot of the effects Prevent has had on students. An eight year-old boy in east London was referred to social services for wearing a shirt with the words, “I want to be like Abu Bakr al-Siddique” (considered to be one of the first converts to Islam and the first Caliph after Mohammad’s death). A 17 year-old north London boy was questioned by a “special constable” responsible for Prevent in schools for “handing out leaflets … highlighting the humanitarian emergency and water shortages in Gaza.” He was further questioned by two police officers who informed him they were “only looking for certain types of Muslims.”

In perhaps the most outrageous case, a 16 year-old Hampshire student with special needs was referred to Prevent for borrowing a book on terrorism from the school library. Understandably, the child’s mother was infuriated with this arrangement. In an interview with Rights Watch UK, she asked the most obvious question: “If a child isn’t allowed to take a book out of a library and read it, what do they have it for? If that book is in a library any student can go and read it, then if he can’t read it, who is allowed to read it?”

As is to be expected, Muslim students are disproportionately targeted by school and government officials under Prevent. According to the most recent data, as the report notes, 57.4% of all referrals were Muslims, despite making up just 4.8% of the UK’s population.

In no uncertain terms, the report concluded that the UK government needs to abolish Prevent and provide “reparations to those children and families harmed by the strategy.”

There is no reason to believe the results of the FBI’s strategy will be any different.

Equally alarming are localized versions of the strategies which are being pursued under the aegis of Countering Violent Extremism (CVE). Boston’s CVE framework, for example, insists on the need for behavioral assessment of students from kindergarten all the way to colleges. According to documents released through a Freedom of Information Act request, students in Montgomery County, Maryland, can been identified as vulnerable to extremism simply for exhibiting signs of stress, alienation, and homesickness.

In the UK, Prevent has already faced resistance from community groups. The National Union of Students attacked the strategy for assuming “all Muslim students are suspect before proving otherwise.” At their annual conference, the National Union of Teachers voted overwhelmingly to pass a motion opposing Prevent.

In the US, too, there is growing opposition to the FBI’s strategy, led by civil rights and Muslim groups. The American Federation of Teachers has recently joined the opposition. In an open letter to the FBI Director James Comey, it argued against “[i]ncreased ideological policing and surveillance efforts” which will “have a chilling effect on our schools and on immigrant communities, jeopardizing children’s sense of safety and well-being and threatening the security and sense of trust of entire communities.”

Despite the objection of educators, civil liberties groups, and Muslim organizations, the FBI is proceeding with its strategy, subverting the primary functions of schools and turning them into “mini-surveillance states.” By alienating students and treating them as suspects, it is likely to encourage violent extremism rather than challenge it.

Four Ways to Help a Muslim Victim of Domestic Abuse