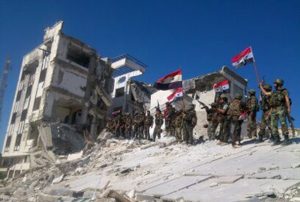 [dropcap size=small]T[/dropcap]he flags of the oppressors flutter in the wind, surrounding their increasingly desperate prey. More and more of them appear as the combined forces of tyranny sense their moment of victory is drawing near.

They have relentlessly pounded their enemy, some of whom are armed, but the majority of whom are women and children. As the siege grows tighter and the civilians become increasingly desperate, the supporters of the tyrant of Damascus refuse to give safe passage for the innocents and instead brazenly kill the children, even in the arms of their parents.(1)

This was Kerbala 1,377 years ago… and this is Aleppo today. Yet this time, it is many of the supporters of tyranny who claim to be followers of Hussain

, if anyone were to study the events of Muharram all those years ago, they would realise how ironic this is. 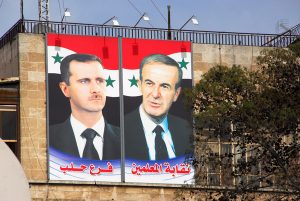 Both, Kerbala and Aleppo are abject lessons in what happens when a population decides to stand up against a tyrant whose only qualification for the role is the fact that his father was the previous ruler.(2) Unfortunately for the people, there are no limits to which tyrants will go to for securing their throne.

When the family of Hussain

were surrounded, they were given a choice – total subjugation or total annihilation. Just like the grandson of the Prophet ﷺ – the brave Syrian people have preferred to die free rather than live on their knees.

And die they have. In their hundreds of thousands.(3)

What does it say about Yazid and his supporters that so many of the family of the Prophet ﷺ chose to fall in a battle that they had no hope of winning against overwhelming military odds rather than live under his rule? What does it say about the supporters of Assad that hundreds of thousands of parents would rather bury their children than let them grow up under his rule? That millions would rather call themselves refugees than his citizens? That they would rather have the barrel bombs and bunker busters over their heads than see the sun rise with him as ruler? (4) 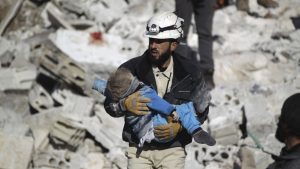 During the battle of Kerbala, Hussain

was moved by the illness of one of his sons. He held the infant in his arms and came out of the tent requesting the oppressors to allow some water through the blockade for the child. They responded by shooting an arrow that killed the child in his father’s blessed hands. Such callous inhumanity is being replayed out multiple times everyday in Aleppo as death rains down from the skies indiscriminately.

If you are still confused as to which side to support, you would do well to see which side has the dead children. (5) 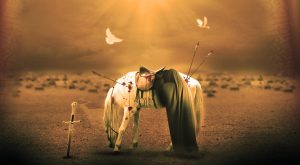 , oh those who claim to defend Zaynab

, oh those who claim to be the supporters of the family of the Prophet ﷺ – know that if Hussain

were alive today, he would be inside Aleppo facing the tyrant of Damascus once more, showing the world that the free can only be killed – they can never be conquered. 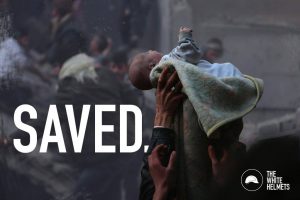 As the tragedy of Kerbala reached its climax, one of the leaders of the opposing side had a moment of clarity. As the veil of temporary and cheap political goals were lifted from him, he saw the situation for what it was – freedom against tyranny. He raced towards the beleaguered family of the Prophet ﷺ shouting over and over with tears streaming down his face, “Is there forgiveness Oh Son of the Messenger of Allah? Is there forgiveness?”

This article is not a call to increased sectarianism or hatred of a group. Indeed there are members of multiple sects involved on both sides. It is a wake up call to those who support the tyrant of Damascus that there may still be time to go over to the side of truth, justice, freedom… the side of Hussain

For all those who support the mass-murdering, child-killing tyrant of Damascus – it is time to acknowledge that Aleppo is the tragedy of Kerbala all over again… and you are on the wrong side.

One Kerbala is more than enough. We don’t need another one.

Featured image: What remains of the Agha Jaq mosque. Photo courtesy of the Aleppo Media Center.

Related Topics:aleppohistoryHussainIslamKarbalakerbalaMuharramMuslimSyriaSyrian crisis
Up Next

Scholars, Speakers And the Culture of “Edu-Tainment” Part 1

The Story of Yunus: Lessons of Trials, Dawah and Patience For Our Lives Today