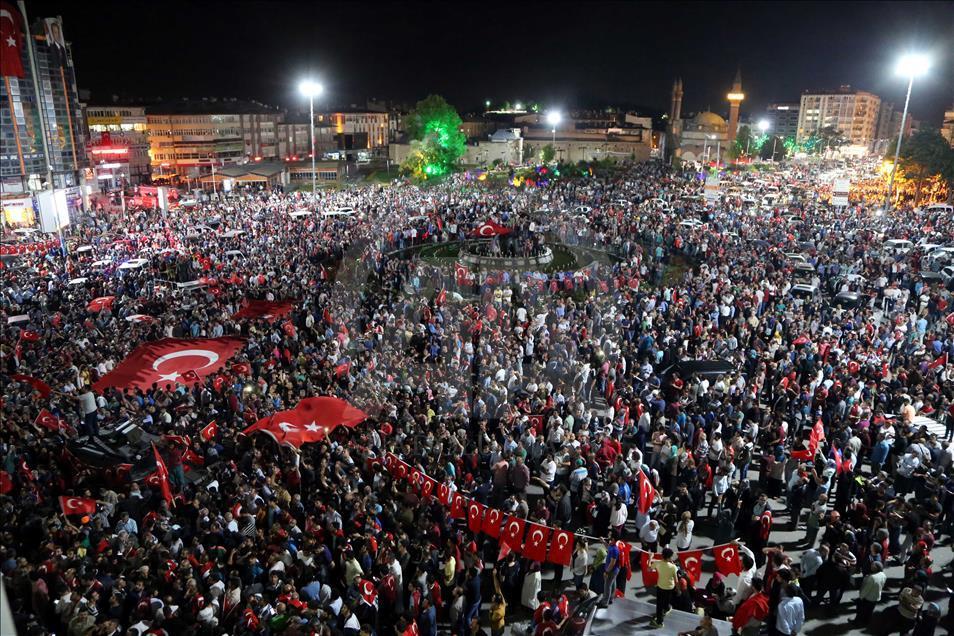 It is hard to be shocked these days, but sometimes you just can’t help but be amazed by the audacity of some of the media. Below is a list (by no means complete) of irresponsible, inaccurate and downright malicious reporting by Western media outlets on the attempted coup in Turkey. It exposes many of them to be engaging in propaganda and duplicitous behaviour that would be unbecoming of even a high school newspaper. 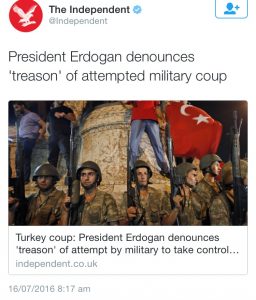 The Independent has been working hard to be as biased as possible against Erdogan. Here they are putting quotation marks around the word “treason” because apparently a deadly military coup against a civilian government leaves some room for doubt on whether it is a crime against the state. 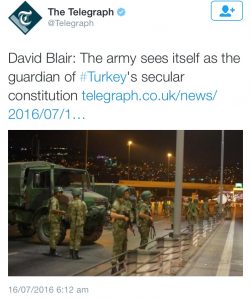 The Telegraph (amongst many others) got to work early quoting experts trying to legitimise the army faction and their actions by labelling them “guardians of Turkey’s secular constitution.” Rather than present them as traitors to their uniform and their nation, noble intentions were being ascribed to one side. 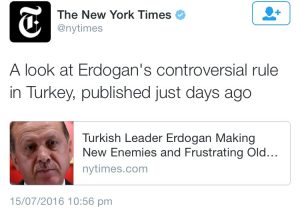 The New York Times decided that the early and confusing moments of a coup would also be the perfect time to remind everyone of their obsession with Erdogan as a uniquely authoritarian leader. Again, the legitimate government of Turkey was being painted as somehow not so legitimate thereby attempting to soften the blow of the putsch. 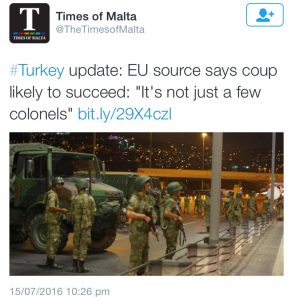 The Times of Malta decided to go even further and along with other publications, started tweeting an unnamed EU source saying that the coup was “likely to succeed.” The unverified nature of the comment and the sheer lack of journalistic integrity of publishing it at such a sensitive time is a gross betrayal of journalistic responsibility. Surely, this helped the coup plotters immensely in their goal to give the impression they had won. 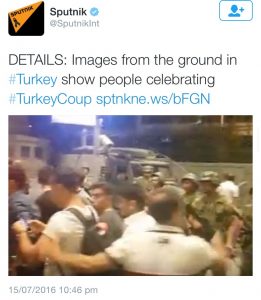 Sputnik News from Russia was never going to be impartial, but presenting people who were risking their lives demonstrating against the coup as “celebrating” it is straight out of the propaganda books of the USSR. Again, publication after publication are pushing a consistent line that is pro-coup and anti-democracy. 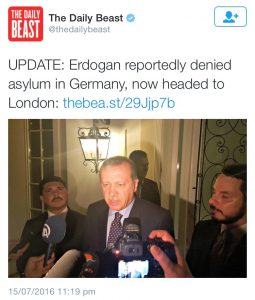 The Daily Beast and many other publications outdid themselves by this totally unsubstantiated and untrue message stating that Erdogan had sought asylum in not one, but two European countries. In fact, as they were tweeting this – Erdogan was landing in Istanbul despite bombs reportedly going off there. As they and other journalists know, if Erdogan had fled the country then forces loyal to the government may well surrender thinking that all was lost. Despite knowing how high the stakes were, they persisted in publishing this blatant lie and still haven’t the decency to apologise or to investigate who fed them this misinformation and why. 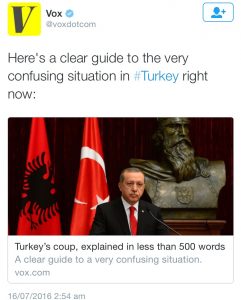 The strapline for the VOX is “understand the news.” What it should say is “understand the news, the way WE want you to understand it.” They put out this piece relying on the short attention span and lack of information that many readers would be coming at the developing situation in Turkey with. Instead of providing “a clear guide”, they put together a hack job that included such clearly biased opinions such as this:

This is not unbiased journalism. This is propaganda masquerading as journalism. 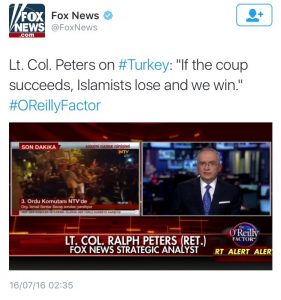 FOX News did what it does best. When a guest was presented with a struggle between a legitimate government the they don’t like and a brutal military coup that would lead to instability and tyranny, they chose the latter. Well, at least they don’t pretend to be fair and balanced. 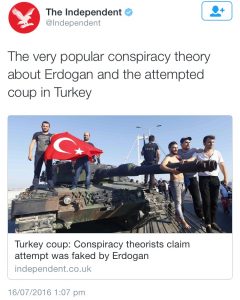 The Independent (again) took it one step further. They put out an article discussing a lunatic conspiracy theory that the whole thing was an elaborate hoax by the government just like the Nazis did previously (!) Apparently, if it is anti-Erdogan then even the craziest, most xenophobic and irresponsible views will find a willing home in the Independent. 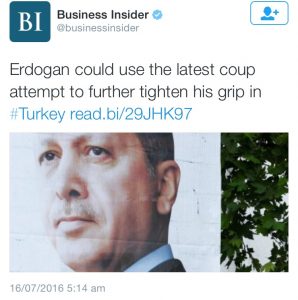 Finally, now that the coup has been thwarted, many commentators and publications went back to their favourite past-time – complaining Erdogan was too authoritarian and ruthless. I mean, it’s not like there was a coup attempt against him, his residence was surrounded by tanks, parliament was bombed and policemen were being murdered in their headquarters?

Oh wait. That is EXACTLY what happened.

To be clear, all the above does not mean that he is a saint. He is a politician and like any politician he has he has his faults and dealings in the murkiness of politics. These issues – whether the handling of the Kurdish terror threat, the economy, stifling the media – should be dealt with like they would in any country that these publications are based in – through the ballot not the bullet.

This is just the tip of the iceberg. Counter and call out this propaganda and ask some serious questions as to why do they all seem so keen to have this leader, this government and this country fall?

After all, as Malcolm X said:

What’s the Matter With All Lives Matter