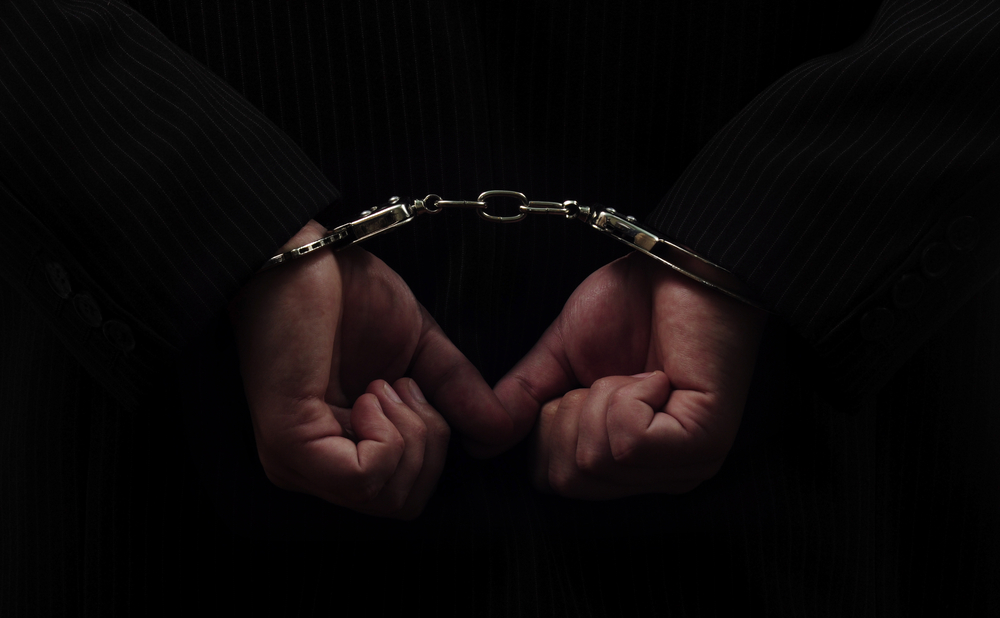 When 14-year-old Sudanese American Muslim Ahmed Mohamed brought a homemade clock to MacArthur High School in Irving, Texas, he thought he was going to impress his engineering teacher. Another teacher heard the device and reported it to the police. Yet, the school was not evacuated, as is standard procedure in similar situations.  And no one showed up with a “Hurt Locker” style suit to dismantle the device. Instead, Ahmed Mohamed was handcuffed in front of his classmates, taken to a juvenile detention center where he had a mug shot taken and was interrogated without his parents or legal representation. Ahmed was charged for a non-violent crime — a hoax bomb. 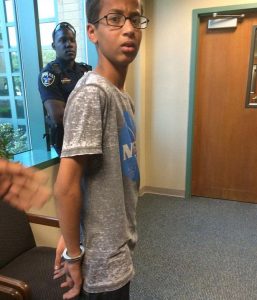 Pictures reveal a shocked child wearing a NASA shirt in handcuffs. As reports spread, the story went viral, garnering a personal invitation from Barack Obama to the White House as well as tours to MIT, his dream school, and a scholarship fund. While anti-Muslim bigotry was the trigger for Ahmed’s arrest, had his case not gathered widespread support he might have been a victim of the school to prison pipeline that plagues Texas. The struggle against the unjust incarceration of youth in Texas still remains. This case demonstrates the ways in which anti-Muslim bigotry, anti-Black racism, and the juvenile criminal justice system worked against Ahmed.

Some Muslims, such as Khalid Hamideh, a representative of the Islamic Association of North Texas, don’t fault the school or police for their response, “Under the current climate that exists in this country, you can’t really blame them because when they see something like that, they have to react.” He puts the blame on politicians who created a climate of fear.  However, knowing it was not a bomb, the school’s response raises a lot of questions. Ahmed was arrested for a hoax bomb, which is a reflection of a larger problem of criminalizing students.

“Muslim American youth are not spared from Islamophobia and its policing dragnet. Although an excellent student, with no record of insubordination, Mohamed’s otherwise pristine record was instantly extinguished by the threat his Muslim background posed. Reality was trumped by the school’s imagined threat of terror, converting a loved student into a perceived radical. Ahmed is also Sudanese American, raising the likelihood that anti-Black racism overlapped with Islamophobia to cast him as suspicious and threatening.”

Anti-Muslim bigotry is an important feature of this case, however it is also important to consider the ways in which anti-Blackness may have played a part. Hind Makki, a Sudanese American interfaith educator who develops and delivers trainings with diverse communities on civic integration through interfaith action, anti-racism education and youth empowerment, tweeted, “I just want to make sure that Ahmed’s Blackness isn’t erased in the discourse over bullying of Muslim children.”

In fact, many people misidentified Ahmed and assumed that he was South Asian rather than the child of African immigrants. Some insisted that Ahmed was Brown because Islam is racialized as a “Brown religion”.  Before, Brown pride meant Latinos, but increasingly South Asians have embraced the term Brown as an ethnic identifier. Brown has become an amorphous category often linked to Latinos, South Asians, and sometimes Arab. In the discussion about the case both non-Black Muslims and non-Muslim Black people spoke, as Sudanese Americans, to argue about Ahmed’s identity. When we can embrace the intersecting identities of Sudanese Americans, we can see how Muslim, African, Arab, Black, and American identities can overlap in ways that dismantle monolithic notions of what it means to be Muslim and American.

Kameelah Mu’min Rashad, University of Pennsylvania Muslim chaplain and founder of Muslim Wellness, writes, “If one lacks a nuanced understanding of how racism, white privilege/supremacy and anti-Blackness operates in this country, ones analysis of Islamophobia will inevitably be incomplete and flawed.”

Focusing on hysteria and rhetoric overlooks how racial and religious profiling in law enforcement disproportionately affects Black and Latino youth, and makes African American Muslim children especially vulnerable to the heavy hand of policing.  For example, Minnesota’s Somali community has been subject to a Counter Violent Extremism program, with basic social services now framed as “crime prevention”. One program tracks their school absences. CVE programs stigmatize Muslims as likely to commit acts of violence and a grant program from the Department of Homeland Security supports social services programs that aim to thwart terrorism. In many ways, the teachers and law enforcement in Irving did exactly what these programs are outlined to do. They did so, maybe not out of anti-Muslim bigotry, but due to existing policies. This is why we, as a community, have to look at legislation and procedures.

Considering Mohamed’s race and the bigoted association of Blacks with crime, the punitive measures taken against him become even more salient. Samiha Rahman, a Bangladeshi Ph.D. student wrote:

“The Ahmed Mohamed case is an example of Islamophobia, but let’s not forgets that it’s also an example of the school-to-prison pipeline – where youth of color are more likely to face harsh punishments for minor offenses in school, where Black boys and girls, even in elementary school, are arrested and detained by police officers. Ahmed Mohamed is a Black Muslim student, and that means he is affected by Islamophobia AND the racist school-to-prison pipeline that disproportionately targets Black youth. ‪#‎IStandWithAhmed.”

According to the ACLU, “Today, more than 170 Texas school districts have their own police department.” Students have been arrested and many, like Ahmed, have not received due process.  The 2010 Texas Appleseed report states, “… in some districts, African American students are being punished 50 times more than white students.”

Implicit bias that penalizes skin tone and phenotype often plays a part in harsher punishments in school and in the criminal justice system. According to Frontline’s Sara Childress, “In Texas, failure to attend school, or truancy, is a criminal offense punishable by fines up to $500, plus court costs.” According to the Department of Justice, children in Mississippi are swept into the court system with their constitutional rights often violated.  Throughout the country, children are exposed to policing techniques used for adults, and those who come from marginalized and underserved communities often plead guilty in cases where they are innocent. Yet, because of their background and the nature of their alleged crimes, our community does not rally on their behalf.

Speaking Out Against Injustice

By looking at the deeper structural issues that led to Ahmed’s arrest, we can speak out against injustice affecting multiple communities, Muslim and non-Muslim. This is part of our mandate, to speak out for justice whether against rich or poor:

O you who have believed, be persistently standing firm in justice, witnesses for Allah, even if it be against yourselves or parents and relatives. Whether one is rich or poor, Allah is more worthy of both. So follow not [personal] inclination, lest you not be just. And if you distort [your testimony] or refuse [to give it], then indeed Allah is ever, with what you do, Acquainted. (4:135)

According to the blog The World Is What It Is, “The common experiences with race will push people of color together and in conflict with whites, resulting in a common interminority identity.” While Sudanese Americans are a small segment of the American-Muslim community, they reflect important intersecting identities that can bring attention to anti-Black, anti-Arab, and anti-Muslim bigotry. However, when we focus on Muslim exceptionalism and fail to see anti-Muslim bigotry as an extension of structural racism, we miss important moments of connecting the Muslim community’s struggles with other oppressed groups. By broadening our vision we can move beyond striving for acceptance, and work towards justice that will uplift Muslims and non-Muslims alike.

Margari Aziza Hill is a co-founder and Programming Director of Muslim Anti-Racism Collaborative. She holds a masters from Stanford University. She is currently researching colorism in Muslim education.

Criticizing “Hajj Selfies” And “Praise Retweets” Can Also Be Riyaa’

7 Signs That You Truly Love the Messenger of Allah ﷺ