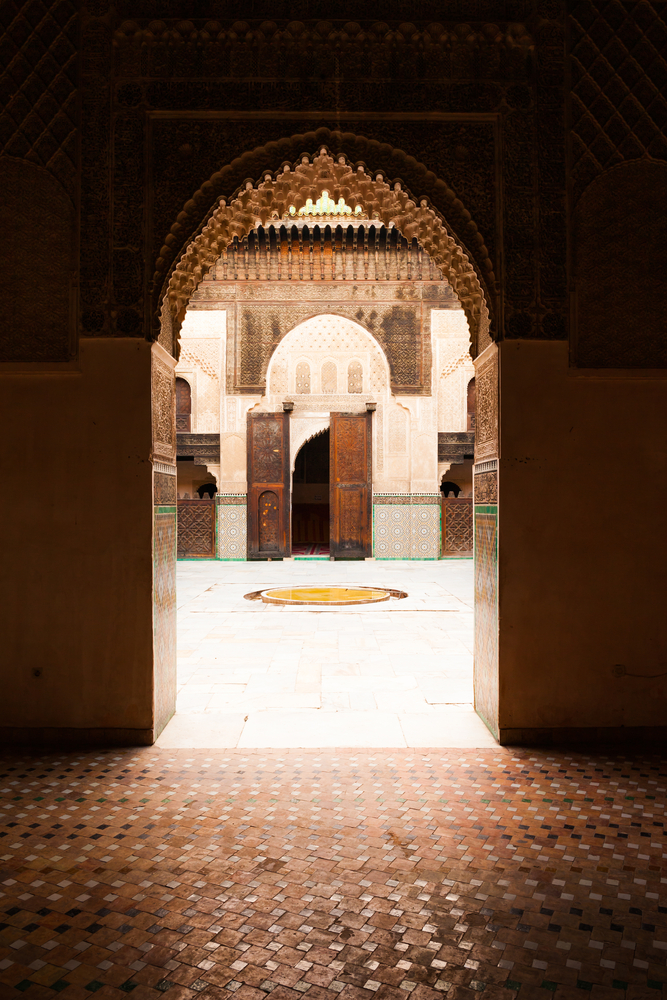 As we strolled through the winding streets of Fez on a Saturday night during a recent trip, a friend pointed to a house tucked away in one of the alleys and remarked, “That’s the house of the woman who gives every student at the Qarawiyyeen 200 dirhams as a gift each year.”

“It’s true – I collected the amount myself,” added a former student we were with. “She also gets everyone measured up and gifts each student a personally tailored jallabah and a pair of shoes.”

‘That’s love – not charity,’ I thought to myself. Love for sacred knowledge, for those who possess it and those who pursue it. 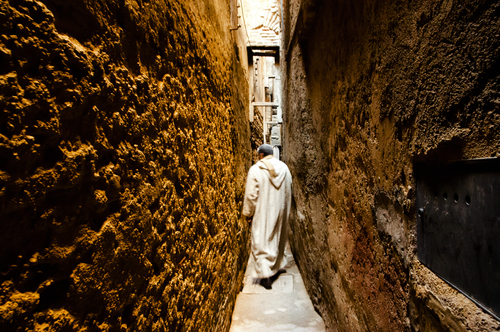 ‘The Qarawiyeen Mosque – founded in 245 AH by Fatima al-Fihri‘, reads a plaque adorning one of the awe-inspiring gates of the hallowed centre; Fatima’s endeavour too was one of love. Shortly after, her sister Mariyam al-Fihri, feeling left behind perhaps, rushed to establish her own mosque and seminary in the newly founded city of Fez. The Andalous Mosque, as it came to be known, also became a center of religious learning and left its mark on the city’s intellectual heritage.

It is because of individuals like these that institutions of learning flourished for over a millennium in the Muslim world. There was an ineffable esteem for knowledge amongst Muslims; it was perhaps this deep love that drove individuals to selflessly spend and endow in the path of religious education. To this day, students at the Qarawiyyen received full financial support thanks to the endowments the school has accumulated over the ages.

It saddens me as I contrast these generous gestures of past to the faltering financial situation of Muslim educational institutions back in North America. Fundraising, unfortunately, is the one thing that occupies the hearts and minds of leaders at the handful of seminaries across US and Canada. Their precious time is often consumed in organizing the unending fundraising dinners, appeals at conferences and the perpetual campaigns needed to meet yearly expenses.

There are far too many stories of debt-ridden scholars having to rely on odd jobs to make ends meets, of students of knowledge returning home after years of study to work at some shopping mall, of unpaid employees at Muslim institutions due to lack of funds.

The few institutions that are financially stable resort to charging students hefty tuition rates and have unfortunately barred the masses from access to sacred knowledge – knowledge that was traditionally offered without any financial barriers.

Students striving to study the sacred sciences formally still have to go abroad; often at great personal and financial risk to themselves. Despite the immense need, avenues for an affordable and comprehensive religious education remain extremely limited – an education that encompasses everything from Quran memorization to Arabic to advanced competency in the Islamic sciences.

Lack of communal support for establishing such schools means that scholars have had to resort to providing part-time education through avenues such as weekend seminars, summer intensives and online-courses. This approach naturally caters to part-time students with part-time ambitions and its scholarly output is many times understandably sub-par as well.

A lack of concern and vision

It would be too simple to say that ‘the money isn’t there’. There’s more than enough money in the community to generously fund educational projects such as a seminary or a college – without respectable scholars having to stand in front of a crowd and perpetually ask for donations.

Anyone that’s worked as a fundraiser knows the wealth the community has been blessed with. Magnanimous gestures of generosity have helped lay foundations for projects like masajid, Islamic schools and NGO’s; these institutions continue to run as a result of continued fiscal commitments from the community.

The problem primarily arises because of our community failing to collectively recognize the need for establishing seminaries that produce scholars for generations to come. The progression from investing in mosques to seminaries should have been a natural one; that progression unfortunately never became a reality.

The general lack of the concern for sound religious knowledge is a global Muslim phenomenon and no doubt it is to blame partially for this issue. However, in the case of North America, the problem is self-inflicted in many ways and goes back to the leadership in our communities – in particular, the leadership at our mosques.

Whereas virtually all historical seminaries in the Muslims world were associated with the large mosques of the city, our seminaries largely have been independent ventures of cash-strapped scholars and students. These brave souls have decided to independently take on the daunting challenge of establishing the intellectual backbone of the community – often times with very little support from the existing communal infrastructure that mosques have to offer.

Once established, these educational institutes run their own programming, marketing campaigns and fundraising events – often times offering redundant services to that of the mosque and competing for access to the same congregation. The healthy ecosystem needed for both the seminary and mosque to mutually benefit often does not exist; an ecosystem where the mosque benefits from the educational output of seminaries and where seminaries benefit from access to the mosques congregation and donor base.

The road to endowments

Establishing self-sustaining seminaries goes hand in hand with creating self-sustaining mosques; the financial strain of maintaining mosques is arguably the primary reason for the stagnated development of other Muslim institutions. Ideally, fundraising activities at the mosque should be used to support other vital organizations that simply don’t have access to the large congregation that frequents the mosque. Educational institutions should be foremost on that list, followed by under funded non-profits such as Muslim lobby groups, chaplaincy programs, publishing houses or artistic establishments.

For their own upkeep, mosques should work towards becoming self-sustaining by establishing profitable endowments and engaging in other revenue generation activities. The current model used by most mosques of relying largely on donations to meet annual expenses is highly inefficient and prevents communal investments into other much needed institutions.

In addition, such heavy reliance on donations has disallowed the mosque itself to develop as a formidable institution. For example, the Imam’s office largely remains a poorly paid position, often a part-time job, with little to no benefits and often entails highly stressful working conditions. How many in the future will aspire to become Imams if the position fails to even promise a decent wage and a dignified lifestyle?

Again, the non-existence of endowment based mosques results due to the lack of a vision – not lack of resources. Fundraising models at mosques have been essentially the same for the past several decades. Why haves fundraisers not organized ‘endowment drives’ where congregants are asked to pledge a percentage of their estate for an endowment fund?  Mosques should offer services to help draft up people’s wills in a way that allows them to contribute to such a fund; every mosque should also have a known workflow for anyone wanting to leave property behind for the mosque – we need to be ‘endowment conscious’. Consider the number of funerals each month at a mosque – imagine how many of those deceased souls would have wished to leave behind money for a trust fund for the sake of perpetual charity (sadaqa jariya).

Educational institutions should also work towards establishing such endowments simultaneously with mosques. However, given their inaccessibility to a large audience, it would be more effective for mosques in each community to direct a percentage of monthly collections to a seminary of their choice. Working towards creating self-sustaining mosques and religious seminaries should be a communal priority. This effort will also create employment opportunities and allow us to build professional expertise in endowment and non-profit management; areas of expertise critically needed in our community.

Naturally, there isn’t one cookie cutter solution for fiscal self-sufficiency that applies to all mosques. It obviously isn’t practical to work on endowments for mosques still under debt or those too small to manage their own endowment. However, even medium sized mosques can raise sufficient amounts for a fund if they set out an organized five to ten year fundraising plan; small mosques could create co-operatives and establish shared endowments. Engaging in managing properties left for the mosque is a simple way even small congregations can work towards revenue generation from rental income. This is something many mosques are already engaged in—the practice needs to become more widespread.

If planned correctly, it is not unimaginable for the vast majority of mosques within North America to be self-sufficient within the next twenty years or so. This process should gradually also lead to increased communal investments into endowments for religious seminaries and other critical institutions. Once our leadership creates an active and vocal plan for the establishment of endowments, it is likely going to create an impetus for wealthy donors who can independently endow to also step-up.

An Imam once told me about a wealthy individual who consistently would donate about $200,000 independently every year to the mosque. There are hundreds of such silent individuals in the community whose wealth, if channeled correctly, can help create longer-term sustainable institutions. Holding congregants hostage for fundraising in Ramadan shouldn’t be a custom our future generations still have to bear – we need to find ways to eliminate it. Our scholars too need to focus their energies on educating and addressing the pressing needs of the community – travelling to fundraising dinners shouldn’t be their primary occupation. Students of knowledge crowdfunding for tuition and living expenses should be a thing of the past. We still have an opportunity to turn around the stint of poor fiscal management in our community; let’s act before it’s too late.

The Gift of Iddah