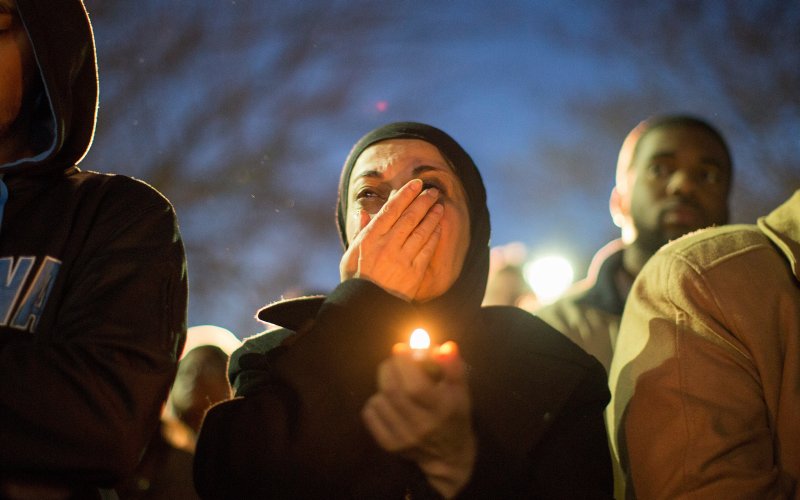 Last week when I, along with 13 other Muslim Americans, met with President Obama at the White House, I explained my concern that given the recent rise in anti-Muslim bigotry, I feared that we could wake up one day to the news that someone had gone on a shooting spree targeting Muslim Americans.Tragically, less than a week later, that very thing may have happened in North Carolina.Yes, I know that we can’t be certain at this moment exactly why the gunman murdered three Muslim-American students—Deah Shaddy Barakat, 23; Yusor Mohammad Abu-Salha, 21; and Razan Mohammad Abu-Salha, 19—in cold blood. And true, the local police have noted that its “preliminary investigation indicates that the crime was motivated by an ongoing neighbor dispute over parking.”But I doubt very much that anti-Muslim hate didn’t play some role in this attack. I say that based on a few factors. One is my conversation with two close friends of the victims and the comments made by the father of the two sisters killed. Second, we can’t ignore that on the day of the shooting we saw wall-to-wall media coverage about the death of the American aid worker and ISIS hostage Kayla Mueller. And finally, we have to factor in the overall rise in anti-Muslim rhetoric we have witnessed on both the right and the left recently.

First, let’s look at the undisputed facts of this crime. On Tuesday night, 46-year-old Craig Stephen Hicks surrendered himself to local authorities, saying that he had shot and killed the three young people. The crime took place in the apartment of the Yusor and Deah, who had married just six weeks ago. The three victims were all shot in the head. There had been a dispute between the couple and the killer, but the precise reasons for Hicks’s anger with the victims is still in question.

According to Ata, Hicks, who had a gun in his hand, yelled at Yusor about an alleged parking issue, and claimed that the couple and Ata had been loud and woke up his wife. Yusor was so shaken by the incident that she called Ata and they discussed whether to report Hicks to the police. Yusor ultimately decided not to alert the authorities.

Amira Ata, who like Yusor wears an hijab, explained to me by phone that when she heard that her friends were killed, she immediately knew it was Hicks.

However, Ata didn’t believe that Hicks was really angry about the parking spot because she explained that there were plenty of spots designated for visitors at the complex. She also denied being loud, saying they had a quiet dinner and played a board game.

Ata mentioned that Yusor had not complained again to her about Hicks. But Yusor’s father, Dr. Mohammad Abu-Salha, told Raleigh’s News & Observer, “This man had picked on my daughter and her husband a couple of times before, and he talked with them with his gun in his belt.”

Overall, Ata said she believes that Hicks killed them because they were the only Muslims in the apartment complex. “They were targeted because they’re different and this is a hate crime,” she stated emphatically.

She also said that on the day of the murders, Deah had just returned by bus. The only one with a car was the younger sister Razan, who had already parked earlier in the day. The point being: There was no “parking dispute” in close proximity to the actual murders.

Dr. Abu-Salha made it clear that he, too, believed that Hicks had deliberately targeted the victims, noting: “It was execution style, a bullet in every head.” He added, “This was not a dispute over a parking space; this was a hate crime.” Abu-Salha also quoted his late daughter, who he said had told him, “‘Honest to God, he hates us for what we are and how we look.”

Sameer Abdel Khalek, a close friend of Deah, echoed the sentiment of Ata and Dr. Abu-Salha. While he never had any interaction with Hicks, he told me others in the local Muslim community had described him as “off putting.” According to Khalek, the Chapel Hill Muslim community believes that the murders were a hate crime given the current climate of anti-Muslim bigotry. (By Wednesday evening, a Facebook page celebrating Hicks as a man who “sacrificed his freedom for his fellow Americans” had surfaced.)

As of now, we have no public statements from Hicks as to his motivation for the murders, although his wife insists it had nothing to do with the victims’ religion. Hicks’s Facebook page sheds a little light but it also paints a complex picture of the man. Hicks wrote, “Some call me a gun toting Liberal, others call me an open-minded Conservative.” He was apparently a supporter of gay marriage and a fan of certain progressive organizations like the Southern Poverty Law Center.

He was also an avowed atheist and had expressed contempt for all faiths, including Islam. Hicks had posted passages from famed atheist Richard Dawkins and “liked” Sam Harris’s Facebook page, both of which have spewed hateful comments about Islam. Dawkins has condemned the attack on Twitter.

The investigation will continue into this tragedy that ended the lives of three young Muslim Americans. I can’t even imagine the heartbreak the parents feel, especially the father who lost two young daughters on the same day. And while part of me would prefer to wish that this was really a dispute over a parking space, I have little doubt that these three young people would be alive today if they were any other faith than Muslim.

A Letter to the Families of Razan, Yusor and Deah from a No-one American Muslim