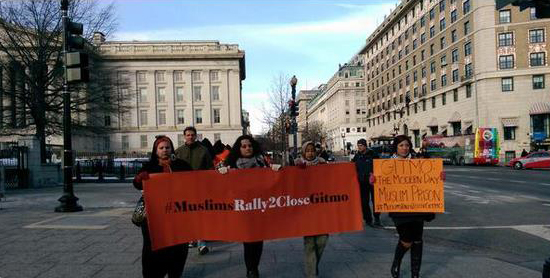 There’s really no such thing as the ‘voiceless’. There are only the deliberately silenced, or the preferably unheard. ~Arundhati Roy~

Despite this fact, Muslims have remained relatively silent about the ongoing abuses of other Muslims in the “War on Terror.” As a Muslim and long time activist on issues of torture and Guantanamo, I have continuously been disappointed at this fact, attending protests year after year only to witness the absence of my community members. This silence has become increasingly painful to bear and ever more deafening with each year that passes.

As an individual whose moral compass comes from Islamic teachings on justice, I have learned that my quest for justice must be absolute, not selective. This is what I, as a Muslim take pride in – my religion’s emphasis on social justice that prompts believers to challenge oppression whenever and wherever it occurs.

With my Islamic principles in mind and on the 13th year of the anniversary of Guantanamo’s opening to house prisoners of the War on Terror, I took the lead in organizing a Muslim contingent to be present at the annual protests in front of the White House.  I organized the contingent with the premise that we, as Muslims, had to be present and that our presence must be intentional. As Muslims, I saw it as imperative that we stand in solidarity with our brothers to challenge and draw attention to the torture and degrading treatment that they have suffered at the hands of the US government.  Moreover, in a climate where Muslim organizations feel repeatedly compelled to condemn violence perpetrated by a small minority of Muslims, we were present to condemn a government that has harmed members of our ummah with our tax dollars. Thus, #MuslimsRally2CloseGitmo was born.

At this year’s protest, we were fortunate to have about ten people present at the rally, including my fellow organizers Ramah Kudaimi and Darakshan Raja. Kudaimi, relaying her reasons for organizing and participating in the rally stated that, “It is a fact that Muslims have been the primary victims of the U.S. War on Terror, yet so often they are absent from spaces organizing against these policies. Muslim Americans have a responsibility to ensure that the Guantanamo Bay prison is shut down and must be at the forefront of confronting U.S. torture, surveillance, and other terror policies and ensuring accountability for all those responsible.”

In reference to the ongoing abuses in Guantanamo Bay and the need for the #MuslimsRally2CloseGitmo, Raja stated, “Guantanamo Bay represents the institutionalization of torture. The torture methods tested at Gitmo were exported to ‘black sites’ across the globe and prisons that deal with Muslims suspected of being terrorists. As long as Guantanamo remains open, the message is constantly affirmed that Muslims aren’t human beings.”

Khadija Mehter, another Muslim in attendance at the rally stated, “As Muslim Americans, we understand that it is our duty to speak out against the terrorism that has been inflicted upon the detainees, ALL of them Muslim, as the Guantanamo prison symbolizes white supremacy, imperialism and subjugation over Muslims globally.”

I genuinely hope that we won’t have to rally to close Guantanamo Bay next year on January 11th, 2016.  But if we do, I hope that more Muslims heed the call to stand for justice for those in Guantanamo. As Frederick Douglass once said, “Power concedes nothing without demand.” Thus, we must use our voices and privilege to demand an end to torture and the closing of Guantanamo.

Below are some tweets from the campaign and pictures from the rally. We pray that these men find some sort of justice and that Muslims continue to grow in their role as advocates for justice, not observers of injustice. 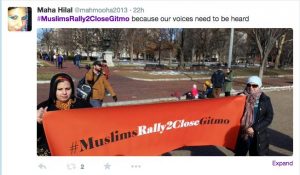 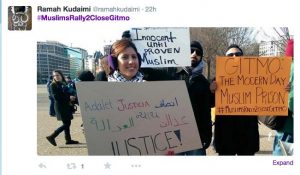 American Muslims and the Trauma of Anti Muslim Bigotry