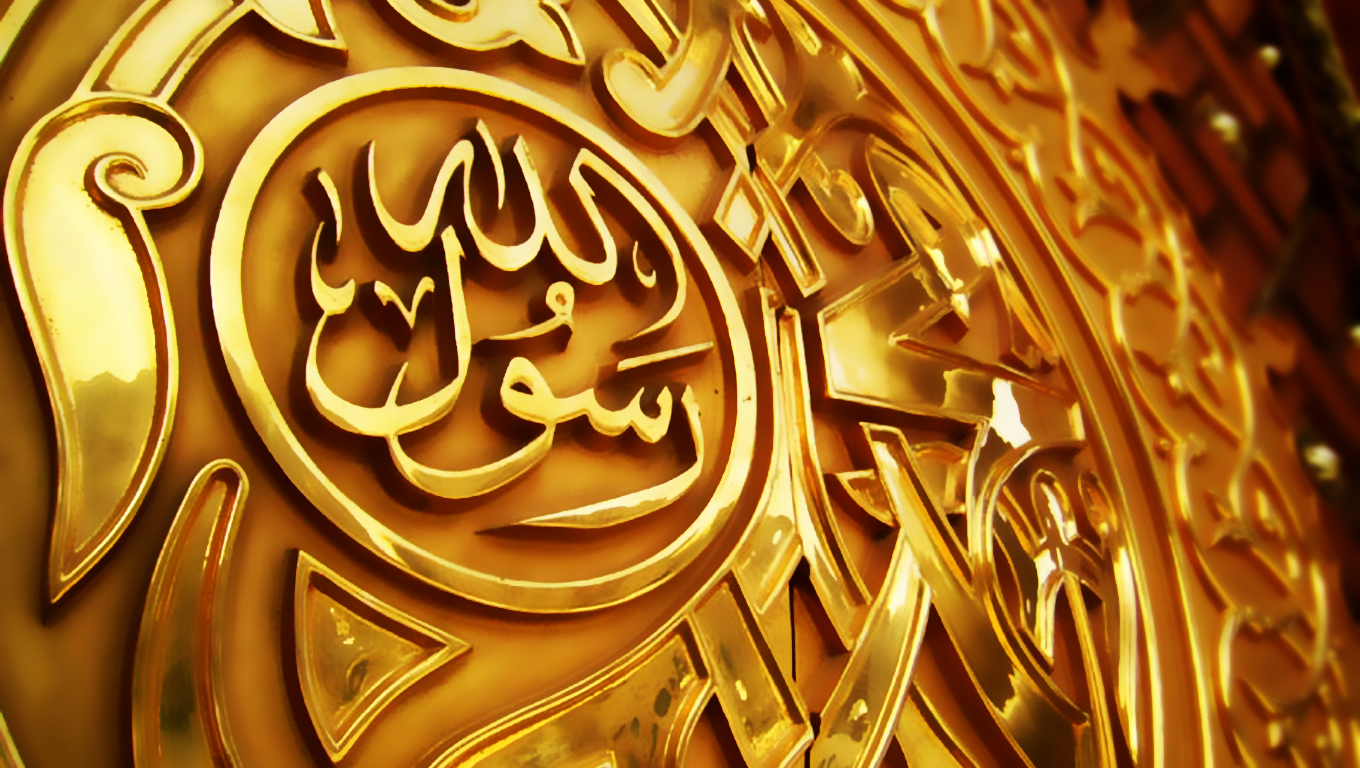 narrated: “The Prophet ﷺ passed by a funeral procession near a grave and he asked: ”Whose grave is this?” They (the companions) replied: “It is the grave of so and so from Abyssinia (Ethiopia).”

Thereupon, the Prophet ﷺ said, “Laa Ilaaha Illa Allah [None has the right to be worshipped but Allah] he was driven from Allah’s earth and heaven to his soil from which he was created.” [Al-Albani classified this Hadeeth as Hasan in As-Silsilah As-Sahihah.]

The great Imam of Sunnah ‘Abdur-Razzaaq may Allah have mercy upon him reported in his “Al-Musnnaf” that Ibn ‘Abbas, may Allah be pleased him, said: “Every person will be buried in the soil from which he was created.”

Let me tell you about an Algerian man named Bukhari who died in a Garden of Paradise.

To arrive at the Sacred Raudah – Garden of Paradise, that which spreads between the ancient, although still partially erect home of the Prophet Muhammed ﷺ and the location of his minbar (pulpit), requires tenacity, patience and opportunity. Thousands of people line up to get a chance to pray in the hallowed Raudah. All with good reason.

Abu Hurayrah reports that the Prophet ﷺ said: “The area between my house and my minbar is one of the gardens (riyaad, sing. raudah) of Jannah (Paradise), and my minbar is on my cistern (hawd)” Narrated by al-Bukhari, 1196; Muslim, 1391.

Most who attend to the Raudah want to pray two units of Prayer, and some intend to do it, according to historical evidence in particular locations and near particular pillars.

Yazeed ibn Abi ‘Ubayd said: “I used to come with Salamah ibn al-Akwa’ (RadiyaAllahu anhu) and he would pray by the pillar which was by the mus-haf, i.e. in the Raudah. I said, ‘O Abu Muslim, I see that you are keen to pray by this pillar!’ He said, ‘I saw that the Prophet ﷺ was keen to pray here.’” Narrated by al-Bukhari, 502; Muslim, 509.

The task of arriving there on any given Friday is even scarcer, as the best of days, attracts the locals in droves and masses from surrounding cities, not to mention the continuous flow of international visitors answering the invitation extended by the Prophet ﷺ.

He ﷺ said, “Do not travel to visit any mosques except three: al-Masjid al-Haraam [in Makkah], this Mosque of mine [in Madina] and al-Masjid al-Aqsa [in Jerusalem].” Narrated by al-Bukhari, 1189; Muslim, 1397.

Everyone flocks to al-Habib! Everyone, local or foreigner, seeks out the relief of prostration near where al-Mustapha ﷺ lived his glorious messengership.

He ﷺ said: “One prayer in this Mosque of mine is better than one thousand prayers offered anywhere else, except al-Masjid al-Haraam.” Narrated by al-Bukhari, 1190; Muslim, 1394.

2 am of every day I am blessed to be in Madina, I arrive to Bab Jibreel (the Gate of the Angel Gabriel) and offer two rakat as soon as I see an opening that does not disturb anyone. Although some forget, the sanctity of Madina is primal.

Abu Hurayrah reported that the Prophet ﷺ said: “Madina is a Haram (sanctuary), so whoever commits evil therein or gives protection to an evildoer, the curse of Allah, the angels and all of mankind may be upon him. Allah will not accept any obligatory or naafil deed from him on the Day of Resurrection.” Narrated by al-Bukhari, 1867; Muslim, 1370

I then make my way towards the Raudah from the back moving forward as best as I can without hopping over the shoulder or cutting in front of anyone praying. Although it is almost four hours before fajr, the Masjid is still quite busy. At this time of night, however, the Raudah is not sectioned off as it is for the majority of the day. So arriving to it, with minimal disturbance of others and securing a spot is relatively assured, if you come this early.

I love to pray at the Ustuwaanah of Aisha RadiyAllahu anha.

The Prophet ﷺ used to say his prayers here and Aisha reported that the Prophet ﷺ said: “In this masjid is one such spot that if people knew the true blessed nature thereof, they would flock towards it in such in a manner to pray there they would have to cast such lots (i.e. Qu’rah).”

People asked her to point out the exact spot, which she refused to do. Later on, at the persistence of Abdullah bin Zubair radiyAllahu anhu she pointed to this spot.

It takes an hour that seems like much longer for me to finally arrive in the Raudah and at my favourite spot.

I pray and let others pray and move along, but I retain my treasured spot. After Fajr the Raudah is sealed upon those already in it for an hour, until the sunrises.

After Fajr, many in the Raudah discover that you cannot offer prayers until the sun fully rises again (Shooruk). Some elect to leave. The Raudah grows sweeter.

About 10 minutes after the Fajr concluded, a middle aged man, dressed in traditional white Algerian/Moroccan attire collapses in the heavy volume of people seeking to greet the Prophet ﷺ at the golden gate. The decision is made that the best place for him to recover is in the now calm Raudah.

As he is carried in, we all assume it will be a few minutes before the paramedics attend to him. His younger brother has a nervous look on his face. I go and sit near him and smile saying, insha Allah it will all be ok. He informs me his brother’s name is Bukhari.

He is a man who outwardly you would, mistakenly, assume him inconsequential, by the absence of any worldly markings and regalia.

I approach him and ask permission from the officers to provide some care. I massage his chest to see if there is any reaction, as I notice no heartbeat or breathing. I use my phone flashlight function to see if the pupils are dilating. A Morrocan physician also in the Raudah, and staying at my hotel comes over to help. We provide primary care and seek to revive Bukhari. We work on him for 10 minutes. 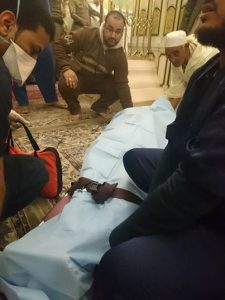 Truly, it was like water pouring out of a vessel. His soul was light, easy and fluid.

It’s quiet. Inexplicably, quiet. The sound of the thousands is hushed prayers. We all recognise the virtue, insha Allah, of Bukhari. Those outside the Raudah look on at him in hope of a similar end, as all of us inside exclaim in prayer for one another. Truly, it was like water pouring out of a vessel. His soul was light, easy and fluid.

The hours others stand to arrive in al-Raudah were circumvented.

The squeezing in to find a foothold were by-passed.

The man who travelled from Algeria who could not find room in ar-Raudah and prayed outside on the marble, as his brother told me, was carried in by official guard.

The man that most of us would assume a simple pilgrim, was an honoured guest of Allah, insha Allah.

The man who lived a lifetime away and was visiting Madina for the first time, was laid down to breathe his last breath no more than 10 meters from the resting place of an Nabi Muhammed ﷺ.

A little before 7 am, on the blessed day of Jumah Bukhari drew his last breath of life, as he lay reclined in the Raudah of Rasul ul-Allah ﷺ.

I closed his eyes and prayed for him, although in my heart I wished that this blessed soul could have prayed for me before his departure.

Bukhari, rahimahullah, later that day, after being prayed on after Jumah prayers, was entombed in al-Baqi – the Graveyard near the Prophet’s Masjid.

Bukhari was made from Madina and to Madina he was returned.

Ya Allah allow me to meet Bukhari, the Algerian, in Jannatul Firdaous, Allahumma Ameen.

Saddened-Find Comfort in the Seerah