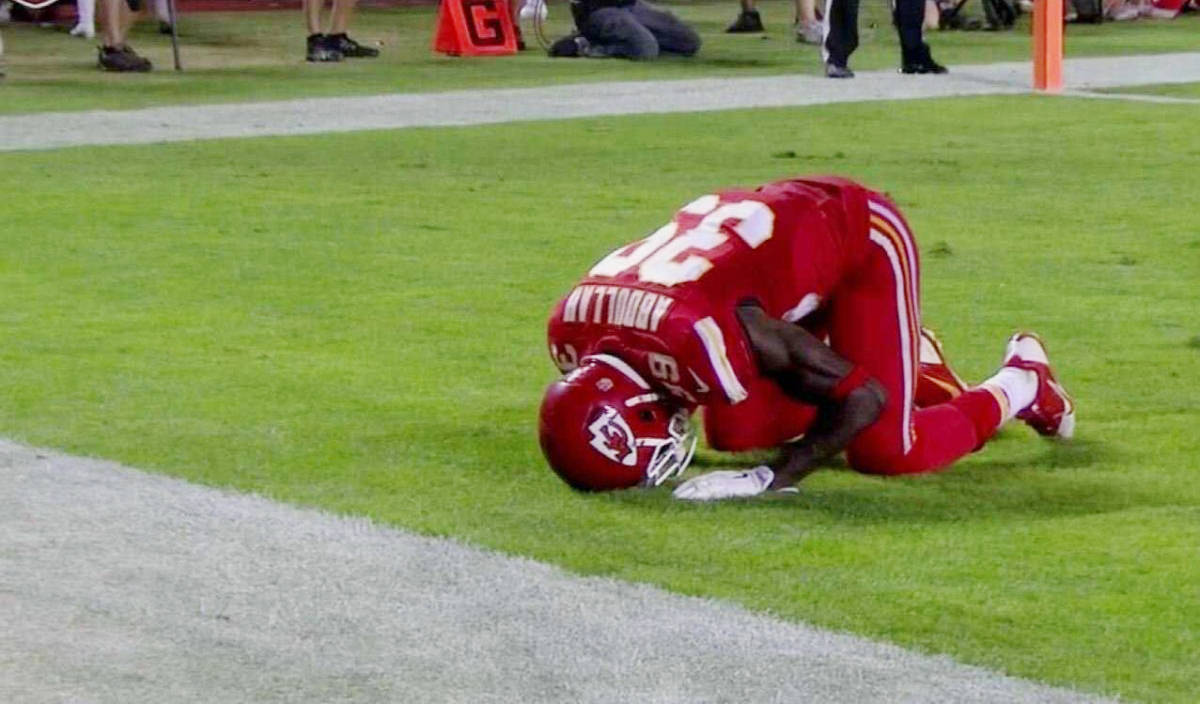 Husain Abdullah, Kansas City Chiefs safety, intercepted Patriot’s Quarterback Tom Brady’s pass. Rushing 39 yards to the end zone, he dropped to his knees in what many media outlets called “a Muslim prayer.” Thought to be celebrating at first, Abdullah was yellow flagged for “excessive celebration.” This drew a 15-yard unsportsmanlike conduct penalty, which was quickly retracted. Players routinely gesture, pray, and thank God after scoring. Tim Tebow, native of Jacksonville FL and former Denver Broncos quarterback, made prayer famous by praying on one knee after scoring; Tebowing quickly became an internet meme with thousands of imitators.

As evidence to Husain Abdullah’s gracious nature and refusal to play the victim, when asked he thought the flag may not have been for prostration and posited that it may have been for sliding into the end zone.

Was the Referee’s call discriminatory?

Muslim youth, idolizing Husain Abdullah’s sportsmanship and love of the game, erupted online at the call. Many others agreed, saying they saw the flag as a slight against religion in general and against someone who merely “prayed differently” in specific. This could not be further than the truth. Most of us (myself included) are unaware that the NFL has changed celebration rules several times, with the most drastic changes happening 2013-2014 off season. (2)

Despite the Refs call that Abdullah’s slide-then-prayer was excessive celebration, NFL Spokesperson Michael Signora disagreed. He said that Abdullah “should not have been penalized for unsportsmanlike conduct following his fourth quarter touchdown.” In an email to NBC’s ProFootBallTalk he quoted Rule 12, Section 3, Article 1 (d) which states that “players are prohibited from engaging in any celebrations or demonstrations while on the ground.” Signora continued by saying that“a player who goes to the ground as part of religious expression” is not to be flagged and “…as a result, there should have been no penalty on the play.” (3)

Excessive or religious, when you are running that fast how else to safely transition into a prostration other than sliding? While the Ref’s call was wrong, I personally do not feel it was discriminatory. This is probably the first time this has ever been done in professional US sports and the Ref probably has no idea what he was witnessing. Someone forward NFL refs a copy of this explainer :).

But what exactly was Abdullah doing?

And why would anyone prostrate when they make a touchdown? Prostration is probably the most recognizable aspect of Muslim prayer, constantly depicted in TV, Movies, and even cartoons. Muslims pray five times a day, placing their head on the ground in prostration at least 34 times or more during the day.

Why do Muslims bow to the ground in prostration, placing face, hands, and knees to the ground? Numerous verses of the Quran command that prostration be included in prayer. “Oh you who beleive! Bow, prostrate, and worship your Lord and do good so that you will be successful.” The Prophet Muhammad ﷺ is recorded as saying “The closest a servant will be to his Lord is when he is in prostration.”(4) Muslim scholars commented on this saying that when a believer prostrates his head to the ground, he is farther from self-aggrandizement and closer to his Lord. Our physical state has a direct effect on our character and perspective, so at the very moment when we achieve a high point in life, we throw ourselves into a state of humility and thanks. (5)

God says in the Quran “If you thank me, then I will only increase you.” (6)

The “Muslim prayer” that Abdullah performed is called “A prostration of gratitude,” known in Arabic as “Sajdat Shukr.” Records of the Prophet Muhammad’s life, known as Hadith, record that whenever he was given good news that pleased him “He would fall prostrate.”(7) While not well known in US sports, around the world Muslim athletes have been doing this for years.

Not one of the five daily prayers, it is a display of gratitude shown at a time of intense joy and cheerfulness. Like the prostration done during prayer, we give recognition to God Almighty that it was His blessings, not our ability, that allowed us to obtain what we’ve been blessed with. It can be done because a person is pleased that something good happened or that something bad was averted. There are no specific litanies or invocations made during the “prostration of gratitude” except that a person thanks God Almighty for the blessing they have attained. There are no preconditions for it, such as ablution or facing Makka; the only precondition is that one feel gratitude and the need to thank God. (8)

Having had the pleasure of meeting Husain and his brothers, I am glad to see him center stage, bringing positive expressions of faith and morals to the public eye. Hopefully “Abdullahing” will be as imitated as “Tebowing” and we’ll see generations thanking God for their blessings.
——————————————

* Shout out to @AB_Syed for helping out my clueless self re-caption the picture of Wahab Riaz prostrating, and to Ammar Mirza for catching a few typos.

(5) See al-Munawi’s comments on the previous hadith in Faid al-Qadir.

(8) See an extensive discussion on this in the Kuwait Fiqh Encyclopedia under “Sajdat al-Shukr.”

3 Marriage Models We Need to Rethink