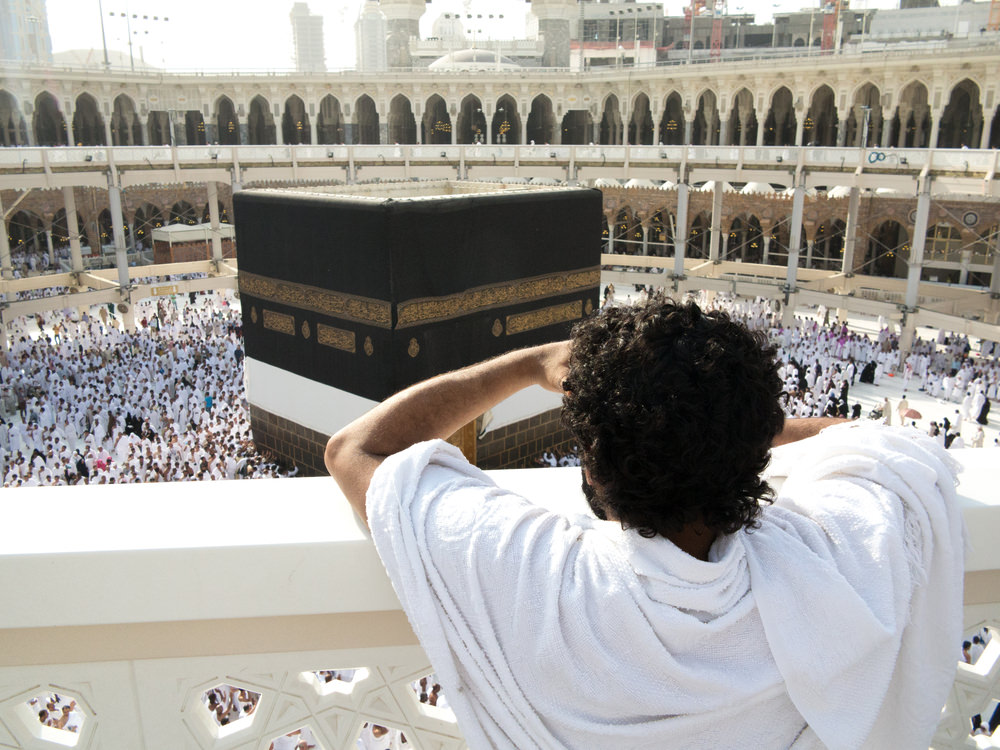 Ḥajj is the journey of a lifetime. This popular statement has become somewhat of a cliché. There was a time when people would save for a lifetime to fulfil this dream and ambition, and for many it remained unrealised. This is still the case for people in many parts of the world. Along with this, for many people Ḥajj is not necessarily that turning point in life, not all people will necessarily become more religious post Ḥajj, and yet for others it is more a status symbol and a prestigious title; Ḥaji.[1]

I do not mean by the above that people no longer value Ḥajj or take it seriously. On the contrary, they do. Yet even for these people, Ḥajj often has a limited effect which wears off after a while. This is perhaps because in this fast paced world where we are accustomed to life in clicks and swipes (smartphones, tablets etc.), we expect that Ḥajj will solve all our ‘piety’ needs like a pill. What we fail to realise is that in order for Ḥajj to be a catalyst for change and a turning point, it has to be something into which we put much effort and work, often years worth.

You may well ask here, what I mean by all this? It is interesting to note that there are two Prophets who are closely related to the Ḥajj and from whom the rites of pilgrimage are taken. The first is the Prophet Ibrāhīm

[2] and the other is our Prophet

. When studying both of their lives, we see that for them the Ḥajj was the culmination of a lifetimes work, effort, sacrifice and achievements, and not just something which happened after a few weeks or months. Let us analyse this in more detail.

It is said that the Prophet Ibrāhīm

was born in Babylon where he grew up in a society prevalent with paganism and idolatry. According to some historians, his father Āzar, used to make and sell idols for a living. The Prophet Ibrāhīm

being upon the natural way of tawḥīd shunned the practices of his people. Allah

throughout the Qur’an chronicles the different challenges Ibrāhīm

First, he approached his father, and with utmost respect and wisdom gently exhorted him to leave the worship of idols. Allah

mentions this in Sūrah Maryam, verse 41 onwards, “And mention in the Book Ibrāhīm. Indeed, he was a man of truth and a prophet. When he said to his father, ‘O my father, why do you worship that which does not hear and does not see and will not benefit you at all?’”[3] Despite his numerous pleas to his father, his petitions fell on deaf ears. Instead his father responded, “[His father] said, ‘Have you no desire for my gods, O Ibrāhīm? If you do not desist, I will surely stone you, so avoid me a prolonged time.’”[4] Thus, Ibrāhīm

faced his first challenge; being disowned by his own father.

, and when they rejected his call he waited to show them the futility of their beliefs. We then have the famous story of the smashing of the idols. “So he made them into fragments, except a large one among them, that they might return to it”[5] When Ibrāhīm

was brought before his people for questioning, he answered, “He said, ‘Rather, this – the largest of them – did it, so ask them, if they should [be able to] speak.’”[6] Despite attesting to the inherent weaknesses of their gods, his people remained obstinate in their beliefs, instead choosing to cast Ibrāhīm

into a raging pyre. “Allah said, ‘O fire, be coolness and safety upon Ibrāhīm.’”[7] Thus, Ibrāhīm

was not only disowned by his father but was then exiled from his land.

next travelled to another land, the Levant according to some historians and came across the celestial worshippers. He then engaged in a debate with them using logic just as he had done with his father and his people. “And thus did We show Ibrāhīm the realm of the heavens and the earth that he would be among the certain.”[8] Ibrāhīm

mentioned to these people the futility of worshipping the stars, moon or sun as each one cannot control when it is visible or invisible to the naked eye, let alone anything more substantial. Instead he proclaimed, “Indeed, I have turned my face toward He who created the heavens and the earth, inclining toward truth, and I am not of those who associate others with Allah.”[9]

As such, the Prophet Ibrāhīm

moved from challenge to challenge including facing the tyrant ruler of his time, Nimrūd. Allah

the son he craved for so long in old age. Yet shortly after this, Ibrāhīm

was commanded to take his wife and newborn son to the barren desert land of Makkah and leave them there. A land in which there was no food, water, shelter or people. It was not even on a normal travelling route whereby people would pass from time to time. Ibrāhīm

obeyed the command of Allah

, sacrificing for His sake. An almost impossible task to perform under any circumstances, but such is the strength of Ibrāhīm’s faith.

and his mother, and a group of people came upon them and settled there. Makkah grew into a town and the baby Ismāʻīl

grew into a boy. His father, Ibrāhīm

returned this time having seen a dream in which he is slaughtering him. “And when he reached with him [the age of] exertion, he said, ‘O my son, indeed I have seen in a dream that I [must] sacrifice you, so see what you think.’ He said, ‘O my father, do as you are commanded. You will find me, if Allah wills, of the steadfast.’”[10] Once again, Allah

rewarded Ibrāhīm’s submission by replacing Ismāʻīl with a ram. These are just some of the challenges that Ibrāhīm

encountered in his life’s journey.

Years pass and by now Ismāʻīl

had grown into a man. Ibrāhīm

returns once more, now in very old age, with the command to raise the foundations of the Ka’bah. He asks Ismāʻīl

for his help. “And [mention] when Ibrāhīm was raising the foundations of the House and Ismāʻīl, [saying], ‘Our Lord, accept [this] from us. Indeed You are the Hearing, the Knowing.’”[11]

Thus the culmination of a lifetime of achievement, sacrifice and submission to Allah

was the building of the Ka’bah. Ibrāhīm

was then ordered to proclaim the Ḥajj.

received revelation in the Cave of Ḥirā’. He was then ordered to call his family to Islam, “And warn, your closest kindred.”[12] After this, he stood on the Mount of Ṣafā and openly invited his tribesmen to Islam. This then began a series of attacks, assassination attempts and wars.

himself was attacked, spat at and the entrails of camels placed on his back. He was mocked, ridiculed and assassination attempts were made. The Muslims suffered economic sanctions and underwent much difficulty.

lost his uncle Abū Ṭālib, his wife Khadījah, two daughters and all of his sons during his lifetime. His other uncle, Ḥamzah was martyred. The Muslims fought a number of battles and many other smaller skirmishes. He

was poisoned, lived with very few material possessions and weeks would pass by in his house without a fire being lit.

To expand on the biography of the Prophet

here would take too long. It can perhaps be best summarised in the following narration on the authority of our mother, ʻĀ’ishah (ranha) who asked the Prophet

, “O Messenger of Allah, has there ever come upon you a day more difficult than Uḥud?” He

replied, “I have faced many things from your people, but the most difficult day was the day of ‘Aqabah, when I went to the people of Ibn ‘Abd Layl ibn ‘Abd Kilāl.[13] They did not respond to my call so I left feeling distraught until I reached Qarn al-Thaʻālib without realising. I raised my head and there was a cloud above me. I looked and saw Jibrīl who called me. He said, ‘Indeed Allah

has heard the response of your people and what they said, and I am the angel of the mountains. Your Lord has sent me to you so that you may command me. What do you command? If you wish, I will crush them between the two mountains.’ The Prophet

said, ‘Rather I hope that Allah will extract from them those who will worship Him alone and not associate anyone with Him.’”[14]

Thus, as a result of the Prophet’s

faith and trust in Allah

, his patience, determination, sacrifice, mercy and good character these same people of Ṭā’if would accept Islam in his lifetime, just as the Makkans accepted Islam after the Conquest of Makkah. After over twenty years of striving for the sake of Allah

performed his first and only Ḥajj, telling the people, “Perhaps I will not meet you again after this year.”[15] Similar to the life of the Prophet Ibrāhīm

, Ḥajj was once again the culmination of a lifetime’s work.

and when the Ḥajj occurred in their lifetimes, we realise that in order for us to get the most out of Ḥajj we need to put in just as much. Ḥajj cannot simply be about those two or three weeks in Saudi Arabia, but our preparation must start as many weeks, months and if possible years before our actual pilgrimage.

Let us reflect on the lives of these two Prophets, contemplate on the magnitude of this great pillar of Islam and prepare ourselves for that honour of being the guests of Allah so that our Ḥajj is truly a journey of a lifetime.

[1] I realise that these statements are somewhat sweeping generalisations but I would opine that this is still the case for many Muslims, although I recognise that there are many for whom this is not the case.

is included with him.

when he went to preach Islam to them.

Related Topics:AbrahamAllahhajjIbrahimIslamismailMuslimProphet Muhammad
Up Next