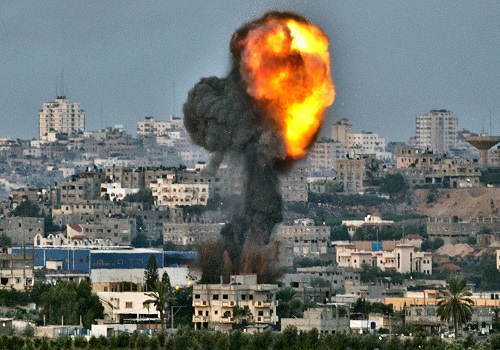 The “peace-loving nation” of Israel is yet again at the brink of an existential annihilation due to homemade rocket attacks from Gaza — or so they would have you believe. As the Israel-Palestine conflict rages, we’ve heard the same boilerplate statements about “Israel’s right to defend itself” and “No country would tolerate rocket attacks, so why should Israel?”

But why are rockets being fired into Israel in the first place?  “Because the Palestinians are terrorists and anti-Semites.” Perhaps, or perhaps there are few more plausible explanations for Palestinian armed resistance; consider the following:

Israel, with U.S. support, has militarily occupied the Gaza Strip (along with the West Bank and East Jerusalem) since 1967. The belligerent occupation, now in its 47th year, is one of the longest, bloodiest and brutal in human history — over 2,500 Palestinians have been killed in Gaza alone in the last seven years.

Up until 2005, Israel maintained illegal Jewish colonies in the Gaza Strip as well. It has since disbanded these colonies and thus claims it’s no longer occupying the Gaza strip. Israel is alone in holding this deceptive view; the UN, US State Department, global NGO’s and legal scholars all consider Gaza a part of the Occupied Palestinian Territories because Israel exercises complete military control over it.

Israel, with U.S. backing, has laid a brutal siege in the Gaza Strip since 2007. It has blocked off air, land and water access to the Strip — nothing goes in, nothing comes out. This tiny strip of land is home to some 1.7 million people; due to its cage-like setup, Gaza has aptly been described as the ‘world’s largest open air prison.’

The siege has stifled Gaza’s economy, destroyed its infrastructure and has cut off access to some of the most basic amenities needed to live a dignified life. Today, almost 80 per cent of Gazans are dependent on aid as a result of the blockade. The UN has warned Gaza will be inhospitable by 2020 if the siege continues.

Israel’s discriminatory division of water means that Palestinians get 70 litres a day per person, far below the 100 liters per capita minimum, while the Israeli’s get four times this amount. Limiting the water supply results in Gazan households receiving water for only six-eight hours at a time about every other day. Israel severely damaged the sewage treatment infrastructure in Gaza during its 2009 assault; the blockade means the resources needed for repairs are unavailable.

As a result, only 25 per cent of Gaza’s waste water is treated; 90 million liters of untreated or partially treated sewage is dumped into the Mediterranean every day. Contamination of the territory’s ground water is serious concern; about 90 per cent of the water supply in the Strip is unfit for human consumption.  Due to over-pumping and sewage contamination Gaza’s only water source, its Coastal Aquifer, is damaged past the point of no return — it will expire in 2016.

4. Scarcity of Fuel and Electricity

Gaza is under a chronic power shortage due to the siege; Israel has severely limited the fuel supply needed to operate the only power plant in the territory. Only 46 per cent of Gaza’s electricity needs are being met currently; this has triggered rolling power outages of 12 hours everyday. Amongst other things, this lack of power means that hundreds of crucial medical devices at hospital are non-functional, including Gaza’s only MRI machine.

5. Leveling of Land and Destruction of Property

The Israeli army conducts weekly incursions into the Gaza Strip to destroy the land it has declared as ‘no-go zone.’ Its tanks, bulldozers and military jeeps, accompanied by helicopters and drones, systematically destroy fruit bearing trees and agricultural land in the Gaza strip. Civilian infrastructure in this area is also demolished; this includes hundreds of houses, wells and chicken farms — mosques and schools are demolished as well.

Israel’s siege has meant that it is virtually impossible for Gazans to leave the occupied territory. They can’t even leave to visit their relatives in the West Bank, let alone in Israel. Gazans with spouses in Israel or the West Bank are forced to live in separation; simple matters such as raising a family are rendered impracticable. Permission to leave even for severe emergencies is rarely given.

By dividing Palestinians, Israel successfully employs the ‘divide and conquer’ strategy like colonial powers of the past. The people of Gaza can’t even seek asylum in other countries due to this restriction on movement. Even students are prohibited from going abroad, or even the West Bank, for higher education; visas of several winners of U.S. Fulbright Scholarships have been revoked in the past. 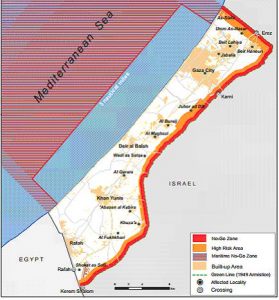 The Israeli army created a ‘no-go zone’ along the Israel-Gaza border that Palestinians cannot enter. This ‘buffer region’ extends up to 1,500 meters at times into the Strip and includes some of its most fertile land. As a result, 35 per cent of the agricultural space in Gaza is off-limits to farmers. This has seriously damaged the food economy and harshly penalized innocent farmers. Palestinians are fired at arbitrarily if they try to enter this region; farmers suffer serious injuries, and at times death, as a result of this indiscriminate firing.

Israel has announced that access to the sea six nautical miles beyond Gaza’s shore is prohibited for fisherman. This means that 85 per cent of fishing waters granted to Palestinians under the Oslo Accords is now inaccessible; this has severely impacted Gaza’s coastal economy. Similar to the restricted areas on land, Palestinian fishermen are regularly exposed to warning fire by Israeli naval forces, their fishing boats are intercepted and they are detained — all for the harmless act of fishing.

This is a short list of the some of the unspeakable crimes Israel commits on a defenseless population; they are at the root of this conflict. Rocket attacks from Gaza are a desperate response to these injustices – how does our government manage to omit this when brazenly expressing support for Israel ?  In light of the above, let’s try to counter some of the nonsense coming out of the foreign affairs office: No people would ever tolerate an oppressive occupation and an unjust siege, so why should the Palestinians?

Of 1.5 million people living in Gaza, 1.2 million are registered refugees spread across eight camps. These refugees are made up of Palestinians, and now their decedents, who were expelled from present-day Israel in during the mass expulsion or Nakba in 1948. Since the newly created state of Israel denied the right of return to these refugees, they have been trapped in the refugee camps for the past 66 years. These refugee camps are overcrowded, cramped and under utter disrepair – unlivable by any standards.  Attempts to rebuild or renovate the camps have been restricted due to the siege. The humanitarian crisis in the camps is only magnified compared to the rest of Palestine; unemployment is high, food is scarce and fuel is scant.

An edited version of this piece first appeared at Rabble.ca

MuslimKidsMatter | How Can a Kid Take Advantage of the Last Ten Nights of Ramadan?

30 Masjids in 30 Days for the Deaf Muslim Community