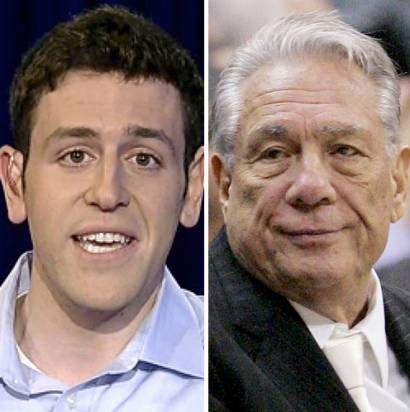 I’ve always found the concept of owning a sports team unsettling. What exactly does one own in a team? When it comes to basketball, the fact that most team owners are wealthy white men who possess teams made up largely of strong black men doesn’t help the imagery. It definitely doesn’t help when an influential NBA team owner gets caught making racist remarks on tape. The fact that Donald Sterling, owner of the Los Angeles Clippers, actually believes he owns his players makes matters just a little more uncomfortable.

As has been widely reported, Donald Sterling was caught expressing frustration with his lady friend and reprimanding her for associating with black men; including the likes of Magic Johnson (oh…the lady friend appears to be of African descent too). When she reminds him of the team of black men that play for him, he responds, “I support them and give them food, and clothes, and cars, and houses. Who gives it to them? Does someone else give it to them? … Who makes the game? Do I make the game, or do they make the game?”

For those that know Sterling, these execrable remarks should come as no surprise. His ‘plantation’ mentality has been well-documented. In a 2009 wrongful-termination lawsuit that was eventually rejected by a jury, former Clippers manager Elgin Baylor reported that Sterling remarked, “Personally, I would like to have a white Southern coach coaching poor black players.” In 2006, Sterling was sued by the Department of Justice for housing discrimination when he refused to rent to blacks and Latinos. His reasons, according to one of his property supervisors: “Because of all the blacks in this building, they smell, they’re not clean. … And it’s because of all of the Mexicans that just sit around and smoke and drink all day.” He’s been documented using the N-word as well.

So, given that Sterling’s despicable views were well known, why is it only now that he’s fined and forced to give up ownership of the team? What is the NBA punishing him for? Being a racist or getting caught on a tape that went viral? The swift decision to penalize and ban him is laudable, but the moral high ground the NBA claims is not one that is bona fide. Public outrage, loss of corporate sponsorships, brand damage, and internal politics more aptly describe the league’s decisions. Being a member of one of the most exclusive and wealthiest clubs on the planet, Sterling no doubt has many enemies; this is their chance to take a shot at him.

As repulsive as Sterling’s comments are, one cannot overlook the ethical dilemma they’ve led to. On the one hand is the desire to hold accountable a powerful man for espousing abhorrent and intolerable views, on the other is the violation of that man’s privacy and the broadcasting of comments he made in private. After Snowden’s revelations on government spying, Americans have unequivocally deemed the private space as sacred and inviolable. So, it comes as a surprise that the same public would demand to penalize a man using evidence obtained surreptitiously, through spying.

Sterling’s comments have sparked an inadvertent debate on race across America and, as it turns out, he’s not the only white man being tried in the court of public opinion. Princeton freshman Tal Fortgang made headlines last week after his essay on white privilege was re-published by Time magazine.

After being told repeatedly to “check his privilege” on campus, Fortgang wrote an essay trying to dispel the notion that he was privileged. He did this by highlighting the struggles of his ancestors who escaped the horrors of the holocaust and started a new life in America. Since the publication, he has received rather unwarranted attention; right wing groups giving him airtime to further their agenda, while left wingers lambasting him for defending racism.

I’ve never used the phrase nor have I ever been told to “check my privilege;” perhaps it’s because I am not white, or possibly because I went to school in Canada. Either way, I find it a rather harsh thing to say to anyone. Presumably it’s something you would say to shut someone out in an argument by telling them their opinions are invalid simply because of their skin color; not to mention the emotional damage caused by accusing them of collective guilt. It’s the Ivy League equivalent of, “your face is so [insert debate ending petty argument].”

The frustration that might have caused Fortgang to pen that essay is understandable. However, while I am opposed to using that phrase, primarily because it’s rather petty, one can’t deny the legitimate privileges that accompany a particular race. In denying that privilege, Fortgang displays his naïveté and failure to comprehend the racial realities that underpin our society.

“Checking your privilege” doesn’t mean you must apologize for being white, but rather simply recognize that your race gives you an advantage in a multitude of arenas – think of it as a head start in a competition. Success ultimately rests on your abilities, but having the right skin color can make the road a little easier for you by eliminating prejudices.

Since we started out speaking about basketball (and if you’re reading this Tal), let me illustrate the concept of how race can impact one’s success. Imagine you and I showed up at the tryouts for a basketball team at an inner city high school. You might be more qualified to make the team than me, but you can’t dispel the myth that “white men can’t jump” (you should definitely check out that movie).

Without much effort on my part, being dark and tall will likely cause the coach and other players to have greater faith in my abilities than yours; the struggles of my ancestors are irrelevant here. You, on the other hand, will have to go out of your way to prove yourself. Your mistakes will be under greater scrutiny and your chances of ultimate success in the sport will be far lower. I need to perform to ultimately make the team, but I won’t deny that darker skin does help a little in this case. I won’t apologize for it, but I recognize it and I don’t think its fair.

It would be unjust to draw analogies between Donald Sterling and Tal Fortang; one is a known racist while the other is simply unaware of his privileged status in our racially biased society. I do believe, however, that both these episodes illustrate that racial inequality is exceedingly pervasive and remains deeply embedded in the American psyche – but that’s just my personal Weltanschauung.

What do #Ferguson, Anti-Black Racism, Muslim-Owned Liquor Stores, and Detroit have to do with Gaza?