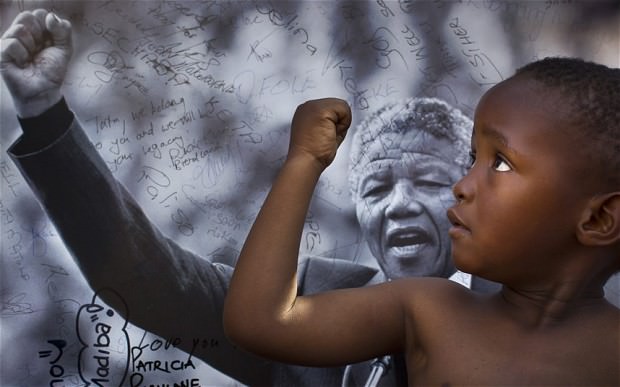 By Na’ima B. Robert

When I heard about Nelson Mandela’s death in the early hours of the morning of December 5, via a message on Viber, the only way I could describe the way I felt was numb. I didn’t feel a crushing sense of grief or loss. I didn’t cry. Although I had been aware of his ill health and knew that he was in his nineties, I had never once considered his passing and what it would mean to me. Over the years, a distance, both geographical and emotional, had grown between myself and the politics of my parents’ birth. There were still so many debates about whether reconciliation had been the right move so soon after apartheid; there remained so many social inequalities. I had been irritated by his portrayal in the film ‘Invictus’ and of course, there was the faith issue.

I told my children, almost out of a sense of duty; they should know this. This is a moment of history in their lifetime. But it was political, theoretical, and not personal. It was far removed from our lived reality, from our own experience. It was just that: history.

That is until a couple of days later, I was browsing the magazine racks in an express supermarket, and I saw his face – Madiba’s face – on the cover of a special edition of Time Magazine. I picked it up out of curiosity, my eyes flicking over the people they had chosen to eulogise him – Morgan Freeman, Francois Pienaar, Bono – and my heart remained as still as a stone, silent and unmoved. This was the man they wanted to sell us: the hero of white South Africa, friend of actors and pop stars.

That was not the Mandela I had grown to know and love, as the daughter of South African exiles growing up in Zimbabwe. My father was a white South African, private school-educated, and my mother a Zulu woman, working as a nurse in Soweto. Under the laws of apartheid, their relationship was a crime and so they fled to the cold embrace of 1970s Leeds, England, where I was born. We moved back to Southern Africa when I was six, settling in a now independent Zimbabwe. And although we were now growing up free, in the post-colonial wonderland that was Zimbabwe in the 1980s, we were still very much tied to The Struggle. To us whose lives had been forever marked by the scourge of apartheid but had managed to escape its clutches, Nelson Mandela embodied the spirit of no surrender. He was the rallying cry, the man whose name we sang, childish voices raised in freedom songs: ‘Mandela says fight for freedom, freedom is in your hands.’

As I said to my children later, Mandela was real for us. His struggle against apartheid was a symbol of our parents’ struggles, the love-hate relationship they had with the country of their birth, their yearning for belonging and to one day, go home.

I was reminded of that struggle when the Time Magazine pages turned from celebrity tributes to photos of Madiba in his young days. That was when I cracked. As a young girl, I had seen those photos so many times; I knew his life story off by heart. I had witnessed his release, the euphoria, the elation, the hope. I had even met him on his first trip to Zimbabwe, when we performed for him and Winnie and I gave him the portrait I had painted. Tears stung my eyes and I wept freely in the supermarket aisle, tears soaking my veil, a wave of emotions and memories surging through me. For me, like so many others, Nelson Mandela was part of my personal history. But more significantly, he is inextricably woven into the fabric of South Africa’s history. His passing signifies an era drawing to a close: the ones who knew and experienced the horrors of apartheid fading and giving way to a new generation of South Africans who never knew it and are trying their best to forget it ever was.

And that is why I resolved to teach my children who Nelson Mandela was. So that we don’t forget. The world has lost an amazing human being. This is a man who was prepared to fight, to sacrifice for his principles. A man who endured 27 years of imprisonment and who came out, still able to love, to laugh, to forgive. Some say he forgave too much. That is not for me to say. But what I take from his life, and the lessons I would like to pass on to my children is this: the truth is worth fighting for, justice is worth fighting for. You should never give up, no matter how tough it gets for you just may get a second chance to live free, to love, to work towards the fulfillment of your dreams.

And if our children as the Muslims of the future, were to learn these lessons from Mandela’s life, and the lives of other great and fearless human beings, can you imagine how powerful that would be? Just imagine.

bless us all with the ability to be inspired by those who fight for justice, who live fearlessly and are determined to be the change they want to see in the world.
Aluta continua. The struggle continues.

Na’ima B. Robert is editor of SISTERS Magazine. She is the author of the popular Muslimah memoir, From My Sisters’ Lips, and the award-winning historical novel, Far From Home, a story about colonial and post-colonial Zimbabwe, as well as other novels for Muslim teens. For more information, visit www.naimabrobert.co.uk

A Tribute to Andalus

Love you, Love You Not, Love You….For Him