Those are the words Sh. Muhammad AlShareef said while introducing me as “AlMaghrib Institute’s newest instructor” at Ilmfest 2012 in Toronto. It’s been over a year now since that day, and in that time, I’ve taught in over a dozen cities around the world and met thousands of students. I’ve not only gotten a lot of insight into AMI (AlMaghrib Institute), but into myself and the people around AMI as well. So here are 8 of the many realizations (in no particular order) that I have come to in my journey as an AMI instructor thus far:

1. Each AMI instructor is different

This seems quite obvious, right? Well, for many people it’s not. There are many who conveniently lump all of the AMI instructors under certain views and ideas. When they see or hear something from an instructor, they assume that all the other instructors share the same stance, or that it’s the official AMI stance. This simply is not true. I’m not saying that we don’t all share a core set of beliefs and morals, but there are issues that we differ on. This is actually one of the very first realizations that I came to in my AMI career. It was at that same Ilmfest last year that I spent time with 9 or 10 of the instructors from the AMI lineup (some of whom I already knew, some I met for the first time). It was then that I realized we are all quite different. Not only do we come from vastly different backgrounds and life experiences, we also disagree on a variety of issues. But that is one of the things I love about AMI – the diversity of the instructors. And I think this is something that the students appreciate as well.

2. The traveling life is not as glamorous as it looks

I know how it looks from the outside. You see the instructors flying in, teaching, and then flying off to another part of the world. It seemed so wondrous to travel the world, go somewhere different every week, and experience new things. The reality is that even though it is pretty cool, it is also incredibly challenging. What you may not know is that most of our transit time (which is a large amount of time) is spent waiting. Most of this waiting takes place in airports: security lines, flight delays (or cancellations), waiting for rides, etc. The reality is that flying is immensely tiring, especially when one is flying so much. What you also may not know is that we don’t really do much on our travels besides teach. I usually fly into a city, teach, and leave as soon as I’m done. Could I stay longer and sight-see? I suppose I could, but for me when it’s between sight-seeing and spending time with my family, choosing the latter is a no-brainer. What some may not realize is that each time an instructor teaches a seminar they are leaving behind their families, and that certainly is not easy, especially for the families. I can clearly see now why the Prophet

“Traveling is a kind of torment, it deprives you of food, drink and sleep. So when one of you has accomplished the purpose of their travel, they should return quickly to their family.” [Al-Bukhari and Muslim].

3. Every American city looks the same

Almost every city I’ve been to has a Walmart, a Target, a Best Buy, a Starbucks at every corner, a McDonalds beside it, shopping malls, strip malls, etc.; it all feels the same. Our consumerist society has made every city look identical… with the exception of maybe the weather and a monument/statue/building/park/whatever that the city is known for! Some days, I’ll be in the car being driven to or from my hotel and I’ll close my eyes, clear my mind, and rest my thoughts. Once I open my eyes again and look out the window, for a moment I’ll forget which city I’m in! Crazy isn’t it?

The first time I sat down with Sh. Yaser Birjas after being hired by AMI (and the first time I had seen him in a long time), he drew a bell curve for me and said, “As a da‘ī, this is your audience.” He went on to explain: if one looks at a bell curve they’ll notice how the two ends of it are small, and the middle is large, i.e. the ends contain a minority of people from my audience and the middle contains the majority. One end represents the people who will love me no matter what, and the other end will represent the people who hate me no matter what. “Pay no attention to either,” he said, “just worry about the middle, the majority, those who will judge you by what you actually do.” 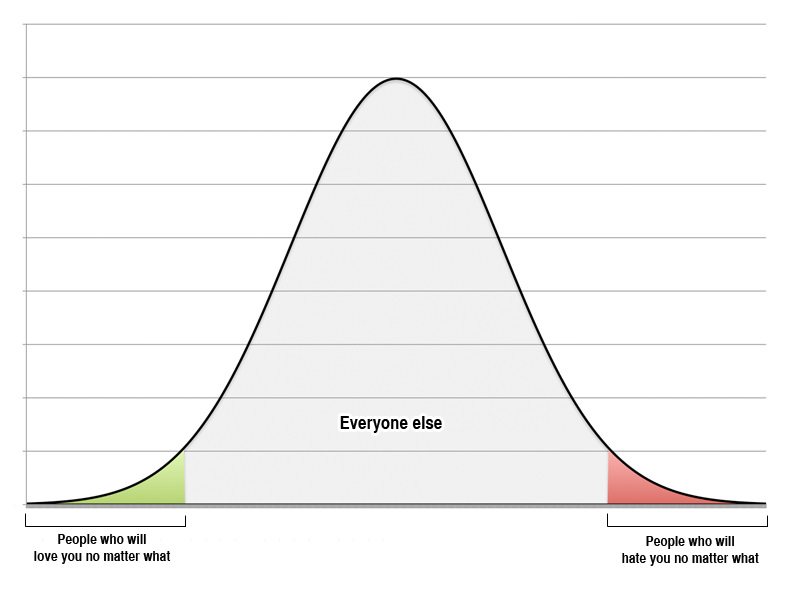 Over the last year, I’ve seen his words come true. I’ve learned to accept that there is a group of people who will hate me no matter what I do, and it really is a waste of time to worry about them. I’ll give you one of many examples I have to illustrate this point: every once in awhile, someone will approach me and tell me of an individual who has been criticizing the class I teach, called “The Fiqh of Chillin’”. Hearing what is being said, I always ask if this person has even taken the class, since it’s so far from what the class actually is. The answer is always no. It used to bother me. Now, I just smile and say, “Tell them to take the class, and then we’ll talk.” So there you have it, haters gonna hate.

A year ago, a well-known Islamic speaker told me that he had a stalker. I thought it was a joke, so I laughed. I’ll tell you what though, I ain’t laughin’ no more! When it happened to me, I couldn’t believe it. I immediately thought: So-and-so wasn’t joking! We can thank the internet and social media for facilitating a lot of this stalking. It’s become so easy to stalk someone these days that I doubt whether the stalkers even realize that they are doing it. You may be thinking to yourself right now, “What’s the line that separates following someone on their social media pages and actually stalking them?” I’ll tell you. Suppose someone has become so obsessed with an individual that they start looking for information about them that isn’t public. They start trying to gain access to their private life. They start trying to be a part of their private life. At this point, they’ve crossed the line. They’ve crossed the line when they go from simply admiring someone to becoming obsessed with them. I know that at times it may seem like we are encouraging this type of behavior by how much of our lives we share online. This is why I’ve learned to be very careful about how much I share. It’s easy for someone to get carried away; it’s easy to start posting things simply for the attention rather than any real benefit. This is why I offer this advice to my peers as well: Certain aspects of our lives have to be kept private; things that we share only with our families and close ones. If someone is special to us, we will share our lives with them in a way in which we don’t share our lives with others. This is how we make them feel special. We owe it to our family and close ones to differentiate between our public lives and our private lives.

6. The AMI volunteers are the real superstars

They may not be in the spotlight, they may not even be known, but they really are the backbone of AMI. I’m not sure most people understand how dedicated the volunteers actually are. Every time I visit a new city, I am truly in awe at how tirelessly the volunteers work and how above and beyond they go with everything. What’s interesting to note though is that their hard work has paid off. I don’t mean for AMI, I mean it’s paid off for themselves. It’s paid off in the sense that you can see the impact their AMI work has had on their characters, social skills, and lives as a whole. Honestly, I have no qualms in saying that the AMI volunteers inspire and humble me.

When you’re disconnected from people, it’s easy to over simplify their problems or even their lives. You will never realize what people are dealing with and going through until you are among them. It’s convenient to divide people into groups of religious and non-religious, or practicing and non-practicing, but people’s lives have a lot more to them then how religious they appear on the outside. After talking to so many people in the last year I have learned to focus on the goodness in people and encourage that instead of focusing on everything that is wrong with them and just criticizing it. I’ve also come to the realization that we simply must be grateful no matter how bad we think we have it, for there is someone going through worse, much worse…

Every time I begin to feel like I’m doing enough for the sake of this dīn, or begin to feel good about the work that I’m doing, all I have to do is look at others who are working for this dīn as well. There are some real gems among our scholars, teachers, da‘īs, imāms, social workers, students, volunteers (see no. 6), and even just average, unknown Muslims. When I look at how much they are doing, how much they are sacrificing, and how much they care, it is remarkably humbling. So to all of you I say: may Allāh reward you for everything that you are doing. May Allah grant us all sincerity in our work, and raise us among the ranks of those whom Allah has bestowed His favor upon from of the prophets, the steadfast affirmers of truth, the martyrs and the righteous, how excellent are those as companions. Ameen.