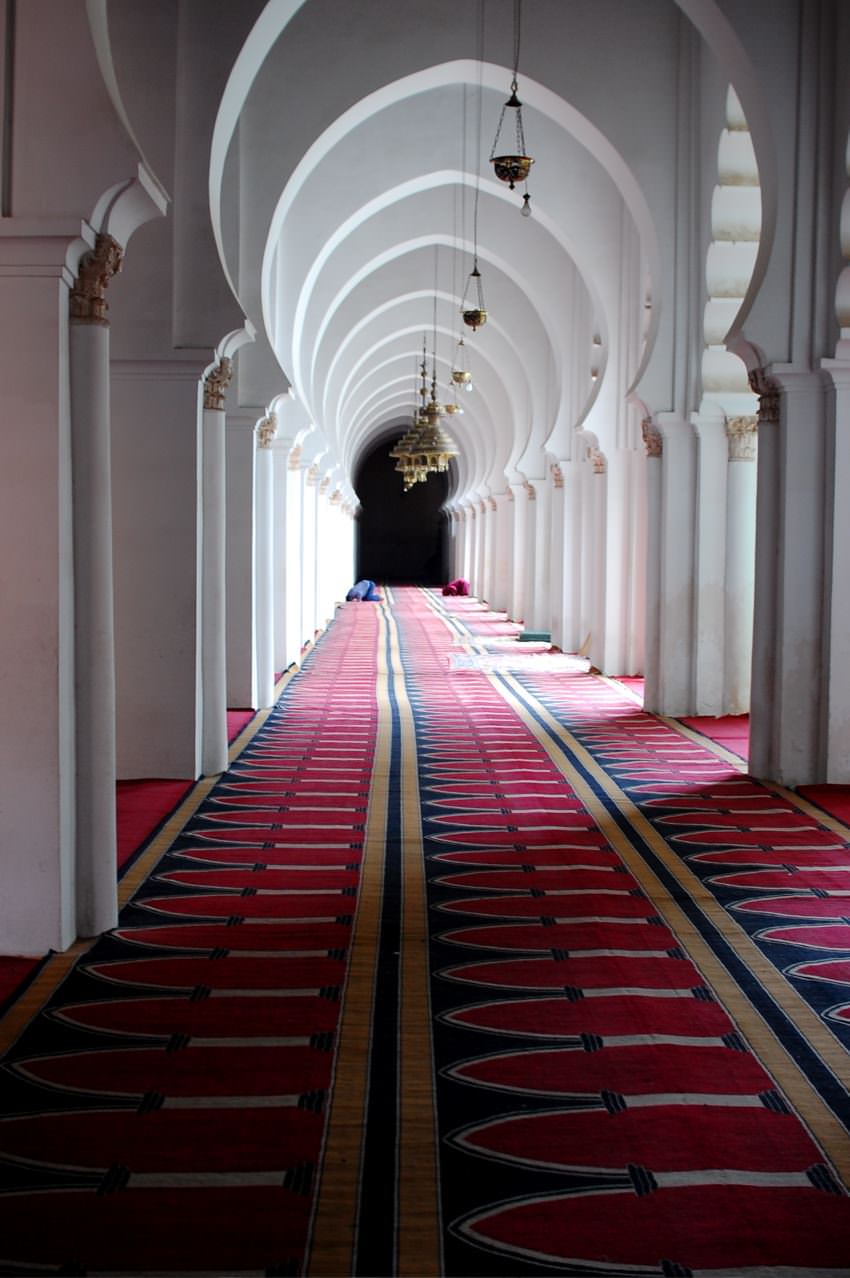 Shawwal is the first of the three months named as “Ashhur al-Hajj” (i.e. the months of Hajj). Although the major acts of Hajj are normally performed in the first ten days of Zulhijjah, yet the whole period starting from the first of Shawwal up to the 10th of Zulhijjah is held to be the period of Hajj because some acts of Hajj can be performed any time during this period. For example, the Tawaf-ul-qudum, followed by the Sai’ of Hajj cannot be performed before Shawwal, while it can be performed any day after the beginning of Shawwal. Similarly, an ‘Umrah performed before Shawwal cannot be treated as the ‘Umrah of Tamattu: while the ‘Umrah performed in Shawwal can be affiliated to the Hajj, making it a Hajj of Tamattu: Moreover, ihram of Hajj should not be started before Shawwal, because it makruh. For these reasons these three months have been named as the ‘months of Hajj’ and the month of Shawwal has the distinction of being the first of these.

The second meritorious aspect of Shawwal is that it has been chosen by Allah Almighty for the celebration of “Eid-ul-fitr “, one of the only two annual festivals recognized by the Shari’ah. This happy day is designed by the Shari’ah as a sign of gratefulness by the Muslims on the accomplishment of Ramadan, and as an immediate reward by Allah for those who spent the month of Ramadan in fasting and performing other forms of ‘ibadah.

Instead of commemorating an event from the past, the Shari’ah has prescribed the first of Shawwal as an annual festival for the Muslims at an occasion when they themselves accomplish a great ‘ibadah. This approach reminds the Muslims that they should not rely only on the accomplishments of their ancestors, rather, they should themselves perform meritorious acts to please their Creator.

In prescribing the ways to celebrate the happy day, Islam has adopted another unique approach. The festivals of other religions or nations normally comprise of some acts of rejoicing and enjoyment. The whole happy day is normally spent in dancing, singing and playing.

In contrast, Islam has prescribed a simple yet graceful way to observe the happy day. First of all, it is mandatory on all the well-off Muslims to start their day by paying “Sadaqat-ul-fitr” to the poor of their society, so that they, too, may enjoy the day along with others, and may not be worried for earning their livelihood at least on that day of happiness.

After paying the “Sadaqat-ul-fitr”, the Muslims are required to proceed to an open place where they can offer the Eid prayer collectively. In this way, they are supposed to present themselves before their Creator and offer tworak’ats of this special type of Salah, which makes them receive blessings from Allah and start their celebration by these divine blessings.

After the Salah also, they are supposed to rejoice the day in a responsible manner, without violating the limits prescribed for them and never indulging in the acts prohibited by Allah.

Keeping this point in view, we will now discuss specific rules prescribed for observing the day of Eid-ul-fitr.

It had been the practice of the Prophet, Sall-Allahu alayhi wa sallam, that he would not sleep in the night preceding the day of Eid-ul-fitr. This night has been named in a Hadith as the Night of Reward (Lailatul Jaiza). Almighty bestows his rewards on those who have spent the month of Ramadan abiding by the dictates of Shari’ah, and all their prayers in this night are accepted. Therefore, it is desirable to perform nafl prayers in this night. The Prophet, Sall-Allahu alayhi wa sallam, is reported to have said:

Whoever stands up (in worship) in the nights preceding the two Eids expecting rewards from his Lord, his heart will not die when the other hearts will die. (Ibn Majah)

To benefit from this opportunity, one should perform as much worship in this night as he can, and should pray for all his needs and desires.

Editor’s Note: It has come to our attention that this hadith has been classified as extremely weak by some hadith scholars. Please check with your local scholarship about the importance of this night.

Before Going to Eid Prayer

The following acts are prescribed as Sunnah at the beginning of the day of  Eid-ul-Fitr before proceeding to the Eid prayer:

1. To wake up early in the morning.

2. To clean one’s teeth with a Miswaak or a brush.

6. To eat a sweet food, preferably dates, before the Eid prayer.

7. To recite the following Takbir in the low voice while going to the Eid prayer:

2. It is a Sunnah that the Sadaqat-ul-fitr is paid before performing the Eid prayer. It can also be paid before the Eid day, but it is not advisable to delay it up to the performance of’ Eid prayer. However, if a person has failed to pay on its proper time, he should pay it as soon as possible, whereby the obligation will stand discharged.

4. Sadaqat-ul-fitr should be paid only to a person who is entitled to receive Zakah.

The second obligation on Eid day is to perform the Eid prayer. Some rules in this respect are mentioned hereunder:

1. The Eid prayer is Wajib (obligatory) on every male Muslim.

2. The Eid prayer can be performed any time between the Ishraq and Zawal.

3. It is preferable that the Eid prayer is performed at an open field and not in a mosque. However, if, it is difficult for any reason to perform it in an open field, it can also be performed in a big mosque.

4. It is not advisable to hold the Eid prayer in every mosque, rather it is preferable that the people from several small mosques get together to either perform it in an open field or, in its absence, in a big mosque which can accommodate a large number of people.

6. The Eid prayer has neither Adhan nor Iqamah.

How to Perform Eid Prayer

The Eid Prayer has two rak’ah to perform in the normal way, with the only addition of six takbirs, three of them in the beginning of the first rak’ah, and three of them just before ruku’ in the second rak’ah. The detailed way of performing the Eid prayer is as follows:

The Imam will begin the prayer without Adhan or Iqamah. He will begin the prayer by reciting takbir of Tahrimah (Allahu Akbar). You should raise your hands up to the ears, and reciting the takbir, you give a little pause during which you should recite Thana’ (Subhanak Allahumma…….)· After the completion of Thana’ the Imam will recitetakbir (Allahu Akbar) three times, and after reciting each Takbir (Allahu Akbar) in a low voice, you should bring your hands down and leave them earthwards. But, after the third takbir, you should set them at the level of your navel as you do in the normal prayer.

After these three takbirs the Imam will recite the Holy Qur’an, which you should listen quietly. The rest of the rak’ah will be performed in the normal way.

After rising for the second rak’ah, the Imam will begin the recitations from the Qur’an during which you should remain calm and quiet. When the Imam finishes his recitation, he will recite three takbirs once again, but this time it will be before bowing down for ruku’. At each takbir you should raise your hands up to the ears, and after saying“Allahu Akbar’ bring them down and leave them earthwards. After these three takbirs have been called and completed, the Imam will say another takbir for bowing down into the ruku’ position. At this takbir you need not raise your hands. You just bow down for your ruku’ saying, ‘Allahu Akbar’. The rest of the Salah will be performed in its usual way.

Khutbah: The Address of  Eid-ul-fitr

In this Salah, Khutbah is a Sunnah and is delivered after the Salah, unlike the Salah of Jumu’ah where it is Fard and is delivered before the Salah. However, listening to the Khutbah of  Eid Salah is wajib or necessary and must be heard in perfect peace and silence.

It is a sunnah that the Imam begins the first Khutba by reciting takbirs ‘Allahu Akbar’ nine times and the second Khutbah with reciting it seven times.

Note: The way of Eid prayer described above is according to the Hanafi school of Muslim jurists. Some other jurists, like Imam Shafi’i, have some other ways to perform it. They recite Takbir twelve times before beginning the recitations from the Holy Qur’an in both rak’ah. This way is also permissible. If the Imam, being of the Shafi’i school, follows this way, you can also follow him. Both ways are based on the practice of the Prophet, Sall-Allahu alayhi wa sallam.

Six Fasts in the Month of Shawwal

It is commendable to keep six fasts in the month of Shawwal. The Prophet, Sall-Allahu alayhi wa sallam, has said:

Whoever completes fasts of Ramadan then adds to them the fast of six days in the month of Shawwal, it will carry the thawab of fasting for the whole year. (Sahih Muslim)

This hadith had described the great thawab of six fasts of this month. Therefore, the Muslims should take this opportunity of acquiring such an enormous reward from Allah. It is more preferable to start these fasts from the 2nd of Shawwal and keep fasting up to the 7th of it. However, if, they are kept in other days, it is hoped that the requirement of the above hadith may also be fulfilled.

Taraweeh Tonight: Connect With The Quran – Thirtieth Night of Ramadan