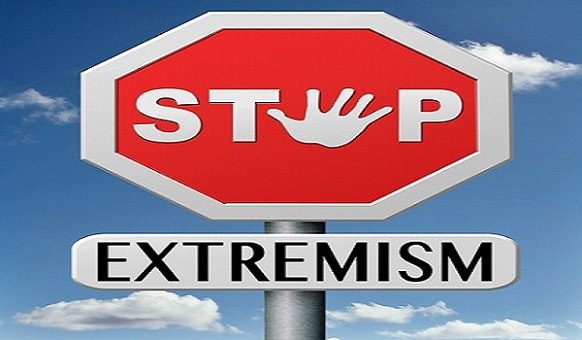 Islam addresses the topic of extremism much more than many people think. What’s interesting about the Islamic approach is that it solves the problem at its roots instead of attempting to solve the symptoms. My motivation for writing this piece is two fold. First is to counter what has become a fact in the minds of many non-Muslims that Islam is synonymous to extremism. Second and more importantly is to address some relatively recent examples of Muslim extremism and the fact that this goes against the very essence of Islam.

The Qurʾān does use the word Ghulow which can fairly be translated as extremism. In an address to the People of the Book, the Jews and Christians, it says:

“Oh People of the Book, don’t go extreme in your religion, and do not say about God except the Truth. Indeed, the Messiah Jesus the son of Mary is the Messenger of God, His Word revealed on Mary, and a spirit sent from Him” [Surah An-Nisa’ : 171]

In essence, the Qurʾān is saying that people can go into extremes in how they show love to a person. A good example is Prophet Jesus – peace be upon him. While one group went extreme in opposing Jesus, another went extreme in loving Jesus to a point that they worshiped Jesus and claimed that he was God or the Son of God.

Now this type of extremism is not limited to the People of the Book. This is why Prophet Muhammad

warned his followers of the same. In a Hadith narrated by Bukhari he said,

“Do not exaggerate in praising me like the Christians have exaggerated in praising Jesus the son of Mary. Rather, say that I’m the Servant of God and His Messenger”

That doesn’t mean the Muslims later always followed this injunction. You still find examples of such exaggeration in Madeeh or Muslim poetry praising Prophet Muhammad

. For example, in a rather famous poem called al-Burda praising Prophet Muhammad

So it’s from your generosity this life and the Hereafter

And from your knowledge, is the knowledge of the Tablet and the Pen

According to Islam, the [Preserved] Tablet has a record of what’s going to happen since the creation of this World till the Day of Judgment. Now, to claim that Prophet

has all this knowledge is not only an exaggeration but it goes directly against the Qurʾān that clearly states that only God knows the unseen or the future. The Prophet’s knowledge on the other hand is limited to what God revealed to him.

The Islamic history is not void of figures which Muslims went extreme over either. A prime example, an example that has quite a resemblance to the Jesus example in fact, is the person of Ali bin Abi Talib

, the cousin of the Prophet

. As one group fought Ali, mostly due to political reasons, another group started showing extreme love towards Ali

and his family, till believing that they are infallible or even divine. Although the group that showed enmity or hatred towards Ali

has very much dissolved in history, there are still sects nowadays that show the extreme and undue love towards Ali

such as the Shia and the Alawite.

In fact, going extreme in showing love or hatred towards anyone is the foundation of the many examples of extremism we see out there. Going extreme in loving a leader or a religious figure leads to blind following and to the conviction that they can never err. Again, Prophet Muhammad

warned us against such tendencies. He said in a Hadith found in Tirmidhi:

In other words, we always need to take it easy when it comes to matters of love and hate. Don’t be blinded by either love or hatred.

I keep marveling at this invaluable advice that we Muslims can’t seem to follow these days. We Muslims have turned into a very emotional people. Even when we claim to be defending the honor of the Prophet

, we violate the very advice of the Prophet

is insulted, we see people bursting into the streets full of anger. They burn flags, they destroy property, and they scream their lungs out. Is this really how the Prophet

would like us to show our love towards him? Or is it better shown through following his example? No doubt, the Prophet

When we love our sheikhs (religious leaders) we love them too much. But when we turn against them, we hate them to death. We don’t have to go too far in history for this one. Only a few days ago, as I was watching the news coming out of Egypt, something appalling struck me. As painful as it was watching the undoing of democracy through a military coup led by General Sisi, what was more painful to me was how Muslim scholars and their students were treating each other. No one was spared, not even uniting figures like Sheikh Abu Ishaaq al-Huwaini or Muhammad Hassan, who were attacked for their so-called neutral position towards recent events. Of course, the main motivation for the stance of those two figures is to avoid bloodshed at any cost. But I guess no-one values that any more! The worst I saw, however, was on Facebook where one follower of Sheikh Salah Hazim Abu Ismail (who was wrongly jailed) was making du’a against Sheikh Yasir Burhami (the spiritual leader of Hizb an-Noor) to burn in Hellfire forever!! What a deranged mentality!

taught us to be moderate even when it came to simple rituals. In casting rocks during Hajj symbolizing the casting of the devil out of our lives, he advised that we use small rocks. The Prophet

in fact made using big rocks a sign of extremism. Nowadays we see some Muslims throwing even sandals during Hajj thinking they’re getting at the devil. Perhaps, they don’t realize that it might be the devil playing them since they’re not following the way of their Prophet

. Another example is how we scream “Allah Akbar” for any occasion. One time the Companions were going over a hill and they started shouting “Allah Akbar”. The Prophet

We Muslims nowadays need to take it easy, but with intellect and reason!