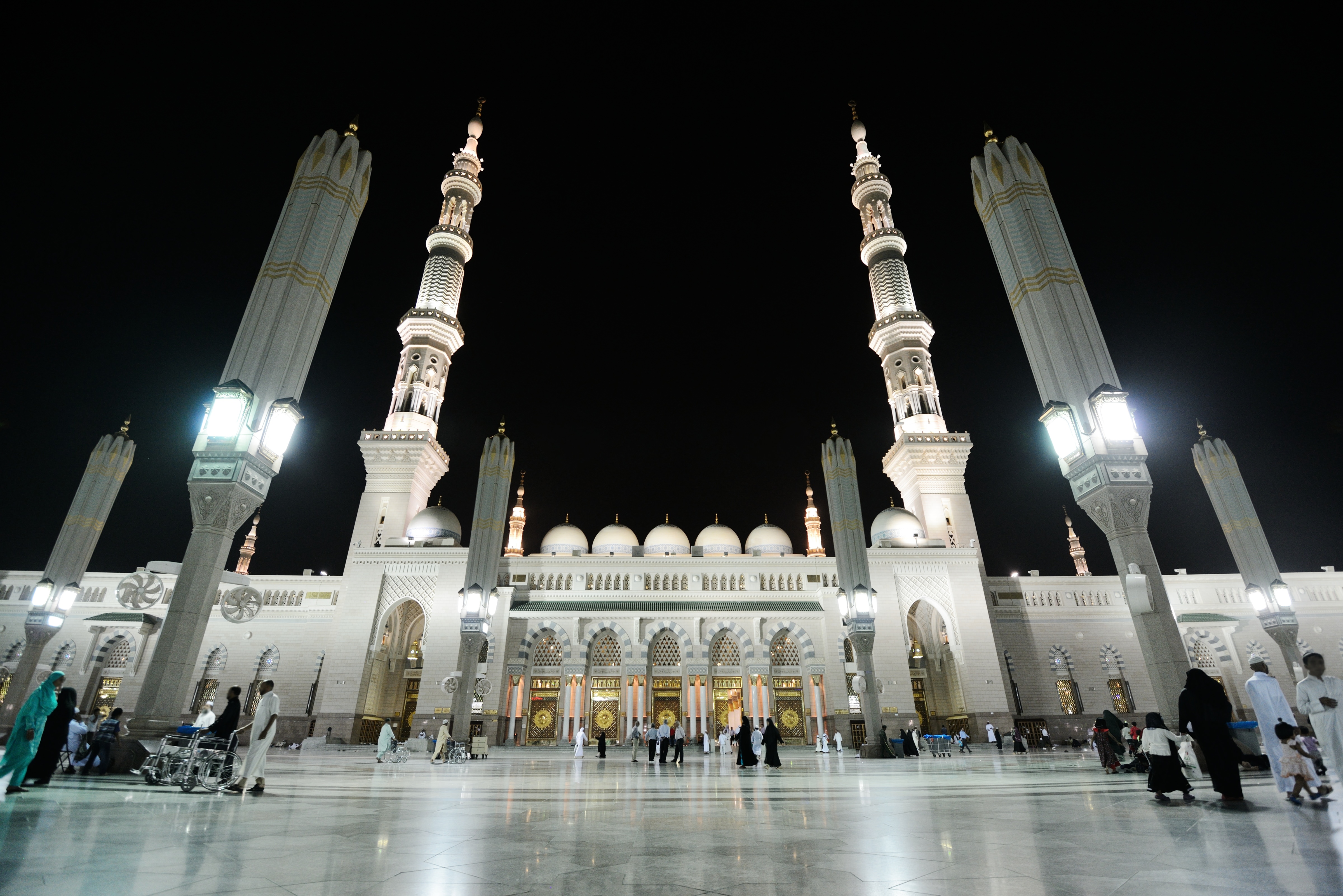 Seeing a scene of impeccable beauty, we often hear the term “Heaven on Earth!” But there is only one place that literally has the right to proclaim itself as such. There, deep in the mosque of the Prophet

(Masjid Nabawi), covered by green carpets and the tears of millions, lies a “garden from the gardens of paradise.” [1] It is a place known to every Muslim who has ever lived, yet there’s still much we don’t know about it. Here are just some of the interesting facts and mysteries of the Prophet’s

9. The first place in the Arabian Peninsula to have electricity

When the Ottomans introduced electricity to the Arabian Peninsula, the first place to be lit up was the mosque of the Prophet

. [2] By some accounts, it would be a few more years before the Sultan himself had full electricity in his own palace in Istanbul. [3] 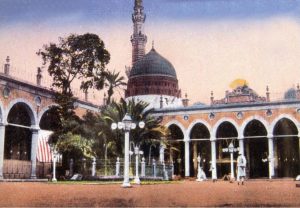 8. The current mosque is larger than the old city

The current mosque is more than 100 times the size of the original building. [4] [5] This means that the current mosque covers almost the entire area of the old city itself. [6] [7] This is evident from the fact that whereas Jannat Al-Baqi cemetery was on the outskirts of the city during the time of the Prophet

, [8] it now borders the precincts of the current mosque grounds.

7. There’s an empty grave in the Prophet’s

are buried. [9] [10] [11] This was confirmed, however, when the individuals who went in to change the coverings in the hujrah* in the 1970s noted the presence of an empty space. [12] Whether or not it is meant for Isa

*Note from author: What is meant by “hujrah” in this case is not the actual burial chamber / original room of Aisha (Ra.) This is enclosed in a pentagonal structure with no doors or windows and has not been visible for centuries. The area meant is the entire grilled area encompassing the chamber and area of other rooms.

6. It was destroyed by fire

The majority of the old mosque, including the original mimbar of the Prophet

, was destroyed in a fire that swept through the mosque centuries after the Prophet

died. The fire was so extensive that the roof and even some of the walls of the room of the Prophet

collapsed, revealing his resting place for the first time in 600 years. [14]

5. There was no dome before, now there are two!

For more than 650 years after the Prophet

passed away, there was no dome over his

grave. [15] The first one was built in 1279 by a Mamluk sultan and was made of wood. [16] The green dome that we see today is actually the outer dome over the room of the Prophet

. There is an inner dome that is much smaller and has the name of the Prophet

4. The dome used to be purple!

Yup – purple. It turns out that the dome has been through various colors and renovations before it reached its current form and colour about 150 years ago. [18]  At one point it used to be white and for the longest period it was a purple-blue colour that the Arabs of Hijaz were particularly fond of. [19] [20] 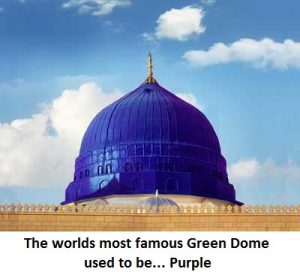 Most mosques only have one mihrab, but the Prophet’s

used to lead prayers from except where he placed his feet. [22]

2. What lies in the room of Fatima

Items belonging to the Prophet

were housed in his room or the room of Fatima

which was incorporated into his room after a major expansion. [23] When Medina was under siege during World War I, the Ottoman commander had many priceless artifacts evacuated to Istanbul, hidden in the clothes of women and children. [24] [25] They can now be seen in the Topkapi Palace. However, intriguingly, some items still remain but are undocumented. [26]

1. It is FULL of secret signs

Yes, the mosque of the Prophet

is covered with so many subtle signs and secrets that it makes the DaVinci Code look like a cheap puzzle for pre-schoolers. Each pillar, each dome, each window carries a story and indicates the location of events that carry historical and spiritual significance. The people who constructed the Prophet’s Mosque realized that it would be impossible to put up signs everywhere as it would distract from the main purpose of prayers. Therefore, they came up with an ingenious way of indicating a location of importance through minor changes in the design of surrounding objects. What are the secrets? Well, that is a story for another day inshaAllah. 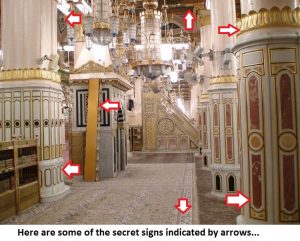 The mosque of the Prophet

was never just a mosque. It was the center of the first Islamic community and nation. It was the scene of our greatest triumphs and tragedies. It was a community center, homeless refuge, university and mosque all rolled into one.

Like the Muslim community, it has grown over the years and become more modern with each passing generation. But despite the exponential growth and changes from the simple Hijazi date palm trunk interior to the marble and gold clad structure we have today – the inner core remains the same. Perhaps there’s a lesson in there for us all.

(Authors note: You may also be interested in Ten things you didn’t know about the Kaaba)

On Tuesday, May 28th, the Sun Will Indicate the Qibla

June 1st : International Day of Action for the Rohingya Suffering