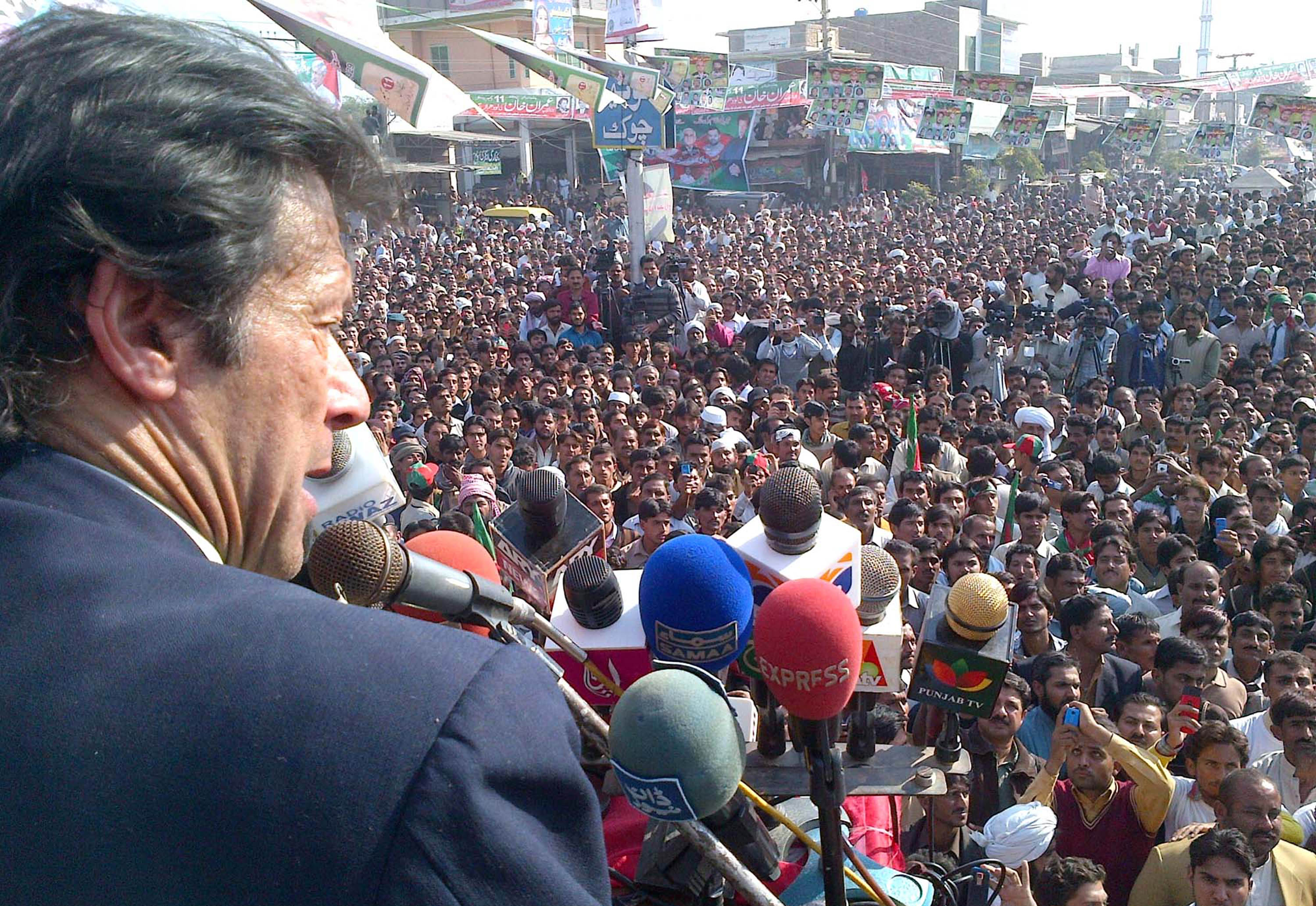 My title encapsulates a critical message.  It frames Pakistan needing Imran Khan, not the other way round. Of course,  Imran needs Pakistan for his sense of identity and belonging, but he does not need Pakistan or its top job for personal enrichment or popularity. This itself sets Imran Khan apart from most other politicians. Imran has been blessed with more wealth and fame than most could ask for. On the other hand, nearly every other Pakistani leader has used government positions to plunder the nation’s limited resources. You would have to dig deep to find a leader in Pakistan’s checkered history whose sincerity can not be questioned, or who did not enrich him/herself while in government.

How is this is a “Muslim matter” or perhaps how this is relevant to the MM audience, most of which resides in the West?  I think both the questions are relatively easy to answer. Pakistan is one of the largest and one of the most troubled Muslim nations in the world, which has– unfortunately– become a hotbed of radicalism and “private” (not government sponsored) exporters of terrorism. Pakistan also receives extra attention from the USA, both in handouts and the murders of its citizens via drone attacks.  There is also a big diaspora of Pakistanis that reside in the West; that sees Imran Khan as its last hope for removing Pakistan from a dark abyss, that seems to be growing deeper by the day.

So here are the top reasons why Pakistan needs Imran Khan as its next Prime Minister:

1.     Imran is the only politician running for the top job whose honesty and truthfulness cannot be disputed. Pakistan’s politics is especially dirty, yet the minions of other parties have not been able to find a single area in which Imran cheated others financially or acquired funds illegally. This in itself is quite marvelous. When one reaches Imran’s level of influence, one can only imagine the countless opportunities he must have had to enrich himself beyond imagination.

He has also kept all his assets in Pakistan and is one of the first to openly declare his assets.

2.     Imran has a track record of sincerity to Pakistan. It was only 20 years ago that Pakistan did not have a single cancer hospital, let alone a hospital that would treat all patients regardless of their financial condition; consider Shaukat Khanum Memorial Hospital. The only cancer hospital where the majority of funding its annual budget of $58 million is donations. A hospital that was not sponsored by any major organization or relief fund; that treated over 150,000 patients in 2012 including over 50,000 radiation treatments (source). Watch this documentary to enrich yourself. This hospital speaks more for Imran Khan than any other stump speech or campaign promise.

3.     Imran is not afraid to speak his mind; and does not shy away from taking the Western powers to task for the “war on terror”, referring for example to the “lies and deception connecting Saddam to Al-Qaeda”. See these two videos (excuse the corny background music in the first one): Video-1 and Video-2

4.     Imran has not made himself subservient to international powers. Global powers, including the West need Imran Khan, just as much as Pakistan needs him, as a partner for peace and prosperity. While it may appear beneficial in the short-term for the West to have another house-slave in the PM House (whether from Pakistan Muslim League or Pakistan People’s Party), this will inevitably fail in the long-term when the party is not sincere to the people. These house-slaves can kiss up to the West and promise to do this or that, but unless they have a mandate from the people, the solutions will only be superficial and are bound to unravel. With Imran Khan, the powers to be will know that he will negotiate on an equal footing of integrity and mandate and will get the respect a leader deserve. Consider the example of China, tt bows to no one, yet a strong China has become the economic engine of the world–without which the West would have also suffered greatly.

5.     Pakistan has become a hotbed of radicalism and terrorism. It is obvious that whatever has been tried over the last 10 years is not working. In fact, the situation worsens by the day. A military solution cannot be imposed. Most Pakistani radicals–Pakistani Taliban or others– are not terribly concerned about attacking the West, but rather they are concerned about their own living conditions, their integrity and honor. When drones take out their entire families, that itself foments radicalism. As Imran has often said, terrorism is not a religion or a nationality or an ethnicity. It is an idea, and ideas need to be defeated in people’s minds with words, not with bullets.

6.     It is Imran’s turn now. All other major parties have had their shot. Nawaz Sharif (Imran’s main rival from PML-N) is kicking and screaming about how he can fix everything if only he had one more chance. Let’s personalize this, if you had a supposed friend who betrayed you five times (number of leadership opportunities Nawaz has had), each time making you worse off than the previous time, would you be ready to give him another chance?  Not only did Nawaz squander previous opportunities and large mandates to “fix Pakistan”, he actually joined hands with the last plunderer Zardari in a “unity government” that effectively destroyed Pakistan over the last 5 years.

7.     Imran has proven himself to be a “great” leader outside politics, and can become the prime minister that Pakistan needs.  Think about it. If you wanted someone to speak on your behalf on the great stages of the world, who would you want to be on your team?  There is something to be said about “great leaders” versus “good leaders”. Great leaders have a charisma that attracts good people; great leaders are the ones you can rely on, count on in difficult times, who you can trust. Imagine, as a Pakistani (or from the diaspora), Imran Khan addressing the United Nations assembly as Pakistan’s leader— imagine the pride swelling up within you to hear an articulate, honest leader representing you. Would not it be amazing to have someone who does not embarrass you to be a Pakistani among non-Pakistanis?

8.     Imran is a true role model for “moderate Muslims”. He does not shy from referring to Islamic principles and ideals. Even in 1992 before he entered politics, he wasn’t shy of referring to Islamic ideals in an interview on 60 minutes. His response to whether he felt hopeless about Pakistan was that “hopelessness is a sin in Islam”.  Over and over again, on his campaign trails, in his stump speeches, he has referred to the seerah (Prophetic history) to take inspiration for himself, and to inspire others. He talked about the Prophet

’s suffering in Makkah and how the Prophet

never gave up and kept the fight for justice. On the other hand, Imran Khan’s party (PTI) includes all levels of Muslims and non-Muslims and piety and religiosity are not prerequisites to be in his party. This sets his party apart from Jamaat e Islami or Ikhwaan in Egypt. PTI is not an “Islamist party”. When the majority of Pakistanis do take inspiration from Islam, it is important that their leader represent that strain, and not be shy about referring to Islamic principles in leadership. This is no different from the American elections where candidates routinely refer to their religious background for inspiration and ideals.

I am sure many of those who are not enamored with Imran Khan may quip that most of what I have said is about Imran’s personality and enigma, and nothing substantial about policies and politics. And they would be mostly right.

But you see when your starting point is between an honest man and a crooks and liars, we could talk day and night about whose policies would be better, but in the end great policies run by crooks and liars will invariably fail like a house of cards!

We are not talking about electing between Jinnah and Iqbal (Pakistan’s illustrious independence leaders). Not even close. Imran’s supporters are not oblivious to the fact that Imran Khan is a political novice, perhaps too much of an idealist, perhaps too honest for his good (if there is such a thing), but we have to consider the alternatives. We have to be realistic here.

If nothing else, Pakistanis can count on Imran Khan to work for them every day, to be on their side everyday, to represent them inside top-level meetings (with internal and external players) the same way as he said he would on the outside. If nothing else, he would make people like me, those who have adopted other nationalities and love other nations, to once again “feel Pakistan”; to once again feel that we could make financial investments in Pakistan, if only because we believe in Imran. There are many, many like me, who genuinely believe this.

I firmly believe that Imran Khan is Pakistan’s last hope, and if Pakistanis don’t jump on this opportunity that Allah has blessed them with, then they deserve whatever they get with the alternatives.

To the people of Pakistan: Let Pakistan have Imran Khan.

Dignity In The Time of Anti-Muslim Bigotry