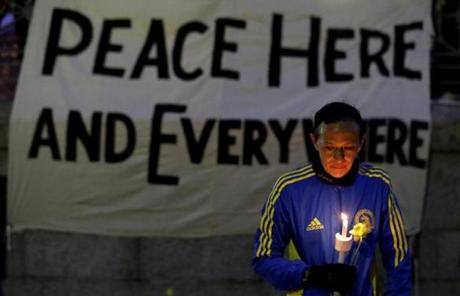 No one likes double standards.  A common response to domestic tragedies such as the Boston Marathon bombings is the concern that while we feel sympathy for the victims and their families in the Boston Marathon bombings, why isn’t there a similar response when far worse in human tragedy occurs daily around the world?  Guardian writer Glenn Greenwald said in a recent article:

“Regardless of your views of justification and intent: whatever rage you’re feeling toward the perpetrator of this Boston attack, that’s the rage in sustained form that people across the world feel toward the US for killing innocent people in their countries. Whatever sadness you feel for yesterday’s victims, the same level of sadness is warranted for the innocent people whose lives are ended by American bombs. However profound a loss you recognize the parents and family members of these victims to have suffered, that’s the same loss experienced by victims of US violence. It’s natural that it won’t be felt as intensely when the victims are far away and mostly invisible, but applying these reactions to those acts of US aggression would go a long way toward better understanding what they are and the outcomes they generate.”

This is an understandable sentiment and to a certain extent, I agree with it.  However, from another perspective, I part ways with this line of thinking because it asks the wrong question to the wrong people at the wrong time.

The wrong question is, “Where are your feelings of empathy for the death and tragedy around the world?” which is being asked at the wrong time (in the middle of a major local catastrophe) to the wrong people (the public which is still reeling from the local tragedy).  A similar question goes out to the media – where is your constant coverage of death and destruction around the world with the same urgency and alarm as what happened in Boston?

The problem is that many of us asking these questions are hyper-aware of the problems around the world, and the implication is that others know about them as well but simply don’t care.  However, if we carefully consider this, we would realize the time the public becomes aware of major issues is when the media covers it intensely.  When any issue is covered around the clock by all media outlets, the public gains awareness, opinions are formed, and empathy is often gained during tragedy.

In contrast, when the media doesn’t cover a tragedy, no one knows, and no one cares.  Not the American public, and likely, not even you.

What are You Doing to Bring Change?

I don’t believe we have an empathy problem – we have an awareness problem and a responsibility problem.  The community is not aware of the problems going on in the world, not to a great extent anyway.  Some might argue it’s the responsibility of the media to draw attention to the urgent problems of the world.

And that is the responsibility problem – we keep dumping responsibility for our problems on the media.  With notable exceptions, the media doesn’t care about your kids, your family, and your communities the way you do.  When tragedies occur around the world, it’s your job to raise the roof, cause a ruckus, and make sure you’re heard.

The sad reality is we ourselves are so dependent on the media, that the only time we pay attention to our own tragedies is when the media itself makes a big deal about it.  People often ask why Palestine is so special.  In one sense, there is heavy focus because it is the location of one of our three holy sites, but the other side of that is when conflict occurs, the world is put on notice, the media kicks into overdrive, and we pay attention as long as the media pays attention.

Here’s a simple question for you to consider – what are you doing to spread awareness about the situation with the Rohingya?  The mass rapes in Mali?  The human rights violations in Guantanamo Bay?  What are you doing to bring about change in these and other situations?  I’m not saying you should get involved in all causes, but are you involved in any cause at all?  Do you ever perform qiyam ul-layl and make du’aa for the people of Syria suffering under Bashar al-Assad?  Have you reached out to anyone outside of the Muslim community to discuss the inhumanity of President Obama’s drone strikes?

Or is the only time we remotely think about these issues when the media brings them up?  As of the writing of this post, 527 Syrians were killed yesterday, so how is your facebook wall / twitter feed this morning?  What were you doing about it?  No, not the community leaders who are picking up the tab for us on the Boston Marathon bombings, who are already making a great sacrifice for us in representing the collective Muslim public, whose families have to endure the trial of media and law enforcement scrutiny.  What are you, the person with more free time, doing about all this?

Comparing tragedies, especially when one has just occurred, is not the way to go.  Yes, it’s a valid sentiment that other tragedies don’t get enough airtime, but then again, I don’t expect much from the mainstream media in terms of looking out for me and my issues.  I realize some may feel conflicted, and not out of callousness towards the victims of the Boston Marathon bombings, but because no one likes a double standard.  Rather than making this an “either/or” proposition, let’s make this an “and” proposition.  We can empathize with the victims of Boston Marathon bombings, and we can also take a more active role in bringing awareness to other human tragedies occurring around the world.

Du’aas and retweeting/resharing are just the start – consistent, enduring effort, forming partnerships with like-minded groups, and more are required to bring about not only awareness, but change itself, and if you don’t care enough to go the extra mile for your own people, there’s no sense in expecting it from the media and a largely unaware public. 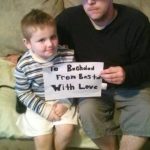 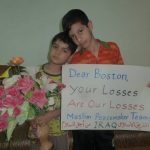 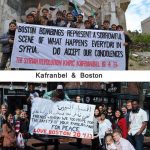 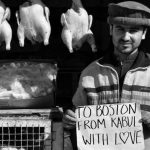 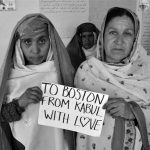