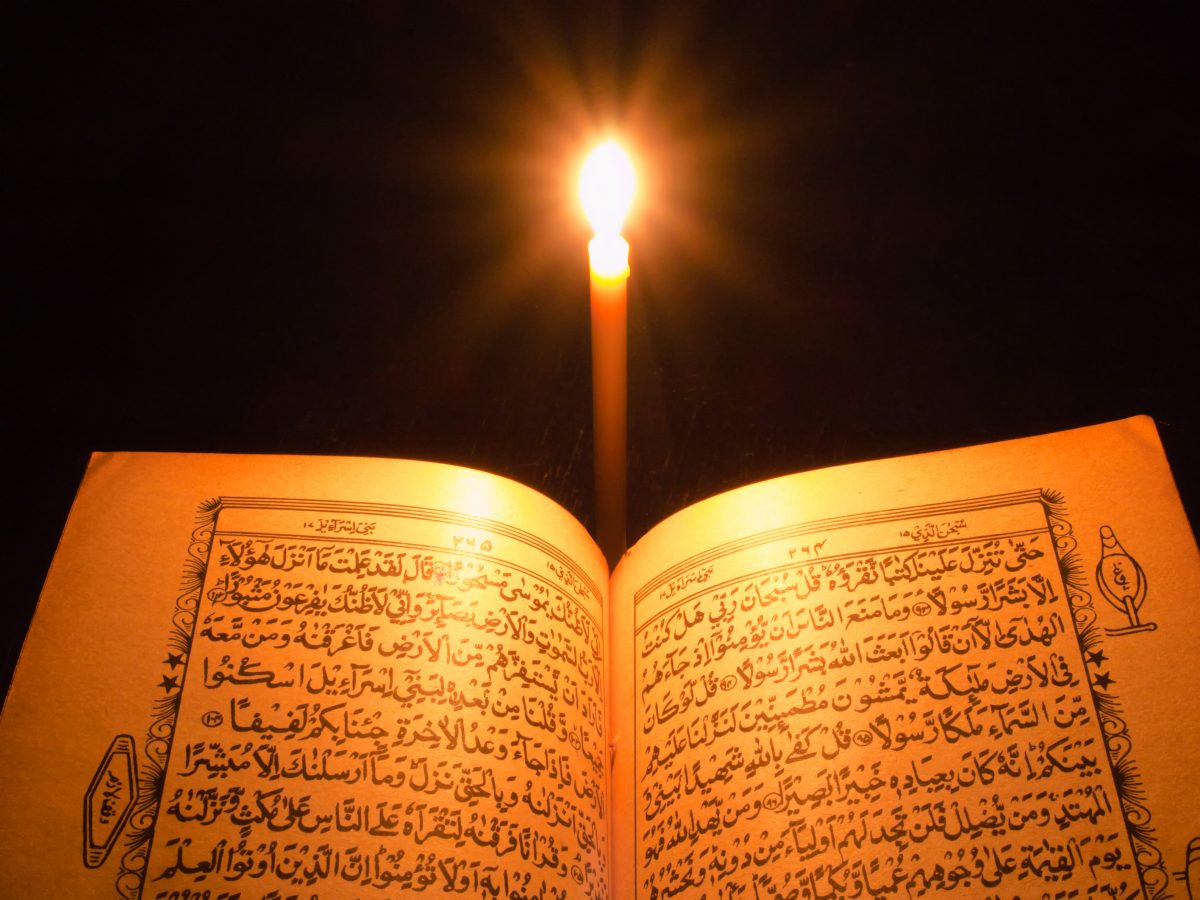 Many of us have heard the beautiful gems Nouman Ali Khan gives in his tafsīr sessions. Whenever I’d take notes of the tafsīr sessions at LinguisticMiracle.com, I used to wish I could do just what he did the next time I read the Qurʾān.

Then I heard people who had a lot of experience with the Qurʾān praising his tafsīr sessions too. They said the tafāsīr were extremely powerful and in some ways unmatched (because he merged the different sciences of tafsīr into one combined study).

So I prayed to Allāh

to grant me the ability to understand Qurʾānic Arabic, and within a small period of time, I was able to grasp the meaning of the Qurʾān’s text and its linguistic beauty. Whenever I’d open a copy of the Qurʾān, I could feel the subtle yet powerful meanings Allāh

was conveying to us.

I will share a brief yet detailed step-by-step method on how to extract gems from the Qurʾān and increase the pleasure you derive from your readings. Bi idhnillāh.

I’ve laid this structure out similar to how Ustadh Nouman Ali Khan and Shaykh Abdul Nasir Jangda give their tafasir. They take the entire sūrah, and break it down into āyāt, and then they break down each āyah word for word. This is the focus of the outline, and I have divided it into 5 steps. Each step works its way up from a smaller scale to a larger scale.

After understanding the Arabic language, we can find gems through studying the basic layout of the language. This is how you extract gems from the Qurʾān.

Step 1 – Definitions of words through their pure roots, and identification of the types of words used i.e. their (verb or noun) pattern style, etc.
Step 2 – Placement of words in an ayah or sentence structure (Balaghah).
Step 3 – Placement of āyaat in a passage or ‘paragraph’ [Rukoo’] of discussion.
Step 4 – How all the different passages work together to form a theme.
Step 5 – To produce a conclusion by deriving the common theme and main message in the sūrah. (Through steps 1-4)

Step 1 – Focus on the Words and their Power

1. Look at definitions of words through their pure roots, and the types of words used i.e. their pattern style (verb patterns, rhymes, palindromes, etc.), the images the words portray, the sounds they make, etc. How can you do this? By discovering Literary Devices

Verb Patterns: look at the verb patterns. What state are they in? If they are in Faa’il (Doer) form – imagine the object is a living object ‘doing‘ that action.

Indeed, the Hour is coming – I almost conceal it – so that every soul may be recompensed according to that for which it strives.

The Final Hour is ‘atiyah (coming) [the Faa’il (doer) form is used and depicts a picture of the Hour actively coming (as if it is walking and approaching us)].

tells us in Sūrat’l-Ḥāqqah 69:23 about the fruits of Jannah (Paradise):

Its [fruit] to be picked hanging near.

He says that they are  “daaniyah” [meaning: “close”] (But the verb form used  is in Faa’il (doer) form, so some scholars even say that the use of the Faa’il form shows that the tree itself ‘comes close’ to the Jannati  to feed him its fruit.

1. Look at the word used, its root meaning, and its usage in:

tells us the promise he made:

[Iblees] said, “My Lord, because You have put me in error, I will surely make [disobedience] attractive to them on earth, and I will mislead them all

Except, among them, Your chosen servants.”

I will misguide them all, except the mukhliseen ( مخلصين ) (see definition of root: Kh-lam-Sad ( خلص )

If you look at the precise word used and its root implication, you see that He will misguide all of us except the:

*Harf (Huroof) words are those small words which ‘connect’ a sentence together.

A word like “fee” (meaning “in”), or ‘Alaa (meaning ‘upon’), Ilaa (meaning ‘to’). Words like these can be looked at from a literal perspective to give more impact to the meanings of a sentence.

Or who is it that could be an army for you to aid you other than the Most Merciful? The disbelievers are not but in delusion.

Allah is the ally of those who believe. He brings them out from darknesses into the light. And those who disbelieve – their allies are Taghut. They take them out of the light into darknesses. Those are the companions of the Fire; they will abide eternally therein.

We see that the devils are pulling the people out of the light (of the fitrah, the natural state humans are born in- believing in one Creator), and dragging them ‘to’ the darkness of disbelief and oppression.

So imagine there is a train called ‘manners’. Allāh

describes His Messenger as being ‘Alaa (upon)      constantly excellent and unmatched character and high morals. You can see an example of this in Sūrat’l-Qalam 68:4:

And indeed, you are of a great moral character.

2. Look at the word used and look for harf* words similar to it, and then wonder why this one was used instead of the others.

And “O Adam, dwell, you and your wife, in Paradise and eat from wherever you will but do not approach this tree, lest you be among the wrongdoers.”

And do not approach ( هَٰذِهِ ) haadhi al-shajarah – this tree.
By Allāh

telling Adam not to approach ‘this’ tree, it implied that this tree was near to where Adam lived. Why didn’t Allāh

use the word that?

said to Adam – do not approach; ’tilka’ ( تلك ) meaning ‘that‘ [feminine form of dhalika ( ذلك ) ] tree (shajarah), it would imply the tree was far from where Adam lived in the Gardens of Eden.

This one word ‘this’ (haadhihi ) shows that Allāh

tested Adam by placing the forbidden tree close to where he lived in the Gardens, just like when we have desires close to us and we are tested by them.

3. Look at the word used, and look for close synonyms to it, and then reflect on why this one was used instead of the others. i.e. إِنَّ اللَّهَ نِعِمَّا يَعِظُكُم بِهِ

Indeed, Allah commands you to render trusts to whom they are due and when you judge between people to judge with justice. Excellent is that which Allah instructs you. Indeed, Allah is ever Hearing and Seeing.

could have used many words to describe that He has been favorable to us by advising us to do good things, Sūrah Āle-‘Imrān:

Certainly did Allah confer [great] favor upon the believers when He sent among them a Messenger from themselves, reciting to them His verses and purifying them and teaching them the Book and wisdom, although they had been before in manifest error.

Other words for ‘Favor‘ include:

Mann ( من): favor or goodness. To remind another of one’s favor and to use it to impose oneself on another. It is also used for a heavy weight.

Ahsana ( أحسن): any commendable deed whether it has to do with the self or another. (see Sūrah Yusuf 12:100)

And he raised his parents upon the throne, and they bowed to him in prostration. And he said, “O my father, this is the explanation of my vision of before. My Lord has made it reality. And He was certainly good to me when He took me out of prison and brought you [here] from bedouin life after Satan had induced [estrangement] between me and my brothers. Indeed, my Lord is Subtle in what He wills. Indeed, it is He who is the Knowing, the Wise.

chose to use another word instead; Ni’im (نعم), which means everything that fulfills a need and becomes a source of happiness.

specifically chose this word to tell us that He is:

Favorable (most common translation of Ni’m is ‘favor’) with what He advises us.
Fulfilling a need for us (by advising us) so we gain happiness.
Being ‘soft‘ with us in what He advises us with. He could have made the rules harder than needed, like the nations before us, but He was Merciful in His Law to us.

3. Next look at the word used and consider the antonym (opposite) to appreciate the power of the negativity in comparison to its positive meaning.

Indeed, your efforts are diverse.

Shatta ( شَتَّىٰ ) (means shatter or divide). But there are a lot of words that mean ‘divide’ in Arabic.

So what is this word’s opposite? It is allafa [ ألف ] (put together something divided as one united whole).

So we see that this āyah doesn’t just mean that mankind’s sa’ee (walking fast, traveling [to the next life]) is divided. Rather, it means our traveling was one and united once allafa [when all people followed the Guidance given to Adam], and now over time it has shattered, like glass breaks or shatters and now we are dispersing like breaking glass into different directions [shatta]. (Some traveling and doing deeds of the people of Hell, and others travelling and doing deeds of the people of Paradise).

Look for common and repeated patterns in the Sūrah.

This repeated pattern is sustained from āyāt 1-12 in Sūrat’l-Ḥāqqah and when the rhyme pattern changes, it’s because the topic of discussion has changed.

In the next post we will discuss Step 2- dissecting the sentences structure and other concepts of balaghah. Please do post any gems you have reflected on in the comments?