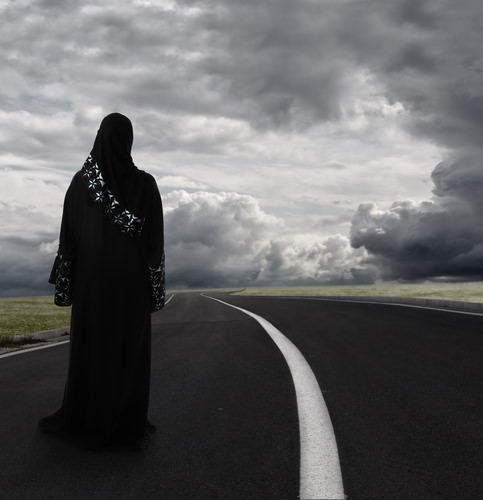 Nina was, in her words, “one of the lucky ones”, and when she tells her story, she says the one thing that made the biggest difference in her life was having Fatimah as a friend. And the only regret that she has till today is that she didn’t realize this blessing sooner…

Nina’s eyes overflowed with tears as she embraced the women who’d witnessed her shahaadah—the testimony of faith marking her entrance into Islam. “We love you for the sake of Allah,” they said. “You are our sister.”

The following week, Nina’s childhood friend Fatimah encouraged Nina to enroll at the New Muslim Class at the masjid Fatimah’s family had attended since Fatimah was a child. Eager to learn about her new faith, Nina agreed.

In the class Nina learned about Tawheed (the Oneness of Allah), the five pillars, and how to pray. When she completed the class, Nina and the other students received a gift bag. In it were two books, the Qur’an and a collection of authentic hadith.

“This is all you will ever need,” the teacher told them on the day they received their certificate. “So hold on to these. There is no Islam except what you find in the words of Allah and in the life of Prophet Muhammad, peace be upon him,” he said. “Remember that, and you will never go astray and you will never be unhappy insha’Allah.”

“That’s not true,” a woman said six months later when Nina related these words and how happy she felt that Allah had made Islam so easy for her. “You have to follow a madhhab. We are too ignorant to study the Qur’an and hadith by ourselves,” the woman said. “We need scholars to explain it to us.”

Fatimah laughed when Nina called her later that night and repeated what the woman had said. “Islam is simple, Nina,” Fatimah said. “There’s nothing wrong with following a scholar or a school of thought, but this isn’t required in Islam.”

“But, Fatimah,” Nina said, her voice shaky with emotion. “What if you’re wrong? The sister said the hadith says we have to follow scholars.”

“Yes,” Fatimah said. “But today people follow scholars more than they follow the Prophet, peace be upon him. The hadith is about scholars inheriting knowledge from the Prophet. So we have to take from scholars only what is from the Qur’an and Sunnah.”

“But how would I know?” Nina said. “I can’t trust myself like that.”

But when Nina hung up the phone, she felt as if Fatimah didn’t understand. Fatimah might be ignorant of Islam herself, Nina thought.

Nina was so excited she could scream. She quickly dialed her best friend’s number to tell her the good news.

“Guess what?” Nina said after Fatimah finally answered her phone.

“What?” Fatimah said, excitement in her tone.

The silence on the other end of the phone made Nina’s heart constrict in fear. But the feeling passed as quickly as it had come. Nina didn’t want to be ungrateful for the blessing of Allah putting Ammar in her life, so she pushed the doubts from her mind.

“Wow, okay…” Fatimah said, her voice cautious. “Where did you meet him?”

“At the masjid,” Nina said, excitement returning to her voice. “The imam introduced us.”

“Three weeks ago!” Fatimah couldn’t contain her exasperation. “Nina, you can’t marry someone you just met. What if he’s not good? Did you ask some friends to meet him and give their opinion?”

“We talked in the imam’s office a few times,” Nina said defensively. “And that’s good enough.”

“Oh my God!” Fatimah said. “You didn’t even talk to him on the phone or see him outside the masjid?”

Nina groaned and rolled her eyes. “I should’ve known not to call you,” she said. “My wali’s wife said that people from your masjid think you have to fall in love before marriage. But that’s not the Sunnah, Fatimah.” Nina felt a bit awkward having to advise the one who’d taught her about Islam. “The Companions of the Prophet didn’t date and mix with the opposite sex.”

Nina heard her friend sigh through the phone.

“Nina, I don’t believe in dating and mixing,” Fatimah said. “But you have to do your research and ask Ammar some hard questions. You have to let your family and friends meet him and see how he acts with them.”

“My family’s not Muslim,” Nina said, annoyed. “Why would I waste my time?”

“You can’t be serious!” Fatimah said. “Do you think the imam would marry his daughter to some guy they met three weeks ago?” She was so upset that her voice grew shaky. “These people marry their children to people they’ve known for years. Don’t let anyone make you think your family is worthless just because they’re not Muslim. When it comes to marriage, that’s when you need family the most.”

“Look,” Nina said, aggravated. “The nikaah is on Friday at the masjid. You can come if you want.” She slammed the phone down and rolled her eyes, hoping Fatimah would just stay out of her life.

Nina was trembling when the plane landed in New York. As she entered the noisy airport, she whispered a prayer of thanks to Allah that she was able to return to America safely—and with her three-year-old son at her side.

The divorce had been long and bitter, at least that’s how it had felt for the eleven months it took before she was finally granted a khula’, the wife-initiated marriage dissolution. Imam after imam and sheikh after sheikh refused to approve her divorce because they said she was divorcing her husband “for no valid reason.” Ammar, a “student of knowledge”, prevented her from talking to family and friends, forbade her from exercise or dance in the home, said she shouldn’t listen to songs (even without music), forced her to quit her online degree program, and agreed to “allow” her to work only when he needed extra money. She told the imams and sheikhs all of this, but they told her to stay and be patient because “Ammar is a good man.”

“You will not smell Paradise if you leave him,” one Islamic studies professor told her. “So fear Allah.”

“Even if your husband is a perfect Muslim,” Fatimah said on a phone call Nina secretly placed when her husband had left the house, “you can divorce your husband.”

“So you can divorce your husband for no reason?” Nina found this shocking.

“Of course not,” Fatimah said. “But your reason might be that you fear for your soul if you stay with him. He doesn’t have to be a bad man.”

“Not in their madhhab,” Nina had said, groaning. “I swear, I’m so fed up with hearing about this scholar’s opinion and that scholar’s opinion, I could scream.” She slapped a hand to her forehead. “O Allah, what happened to just following the Qur’an and Sunnah?”

Nina turned from the carousel at baggage claim and saw the beaming face of Fatimah framed in a floral-print hijab. Nina was so happy to see her friend that she had to resist running to her and drawing her into a hug.

“I feel cheated,” Nina says. And when she’s asked why, she says because the Islam she learned before becoming Muslim was nothing like what she was asked to live after accepting Islam. “I grew so depressed that I wanted to leave Islam,” she says.

But what saved her is having a good friend…

And remembering this about her religion:

There is no Islam except what you find in the words of Allah and in the life of Prophet Muhammad, peace be upon him.