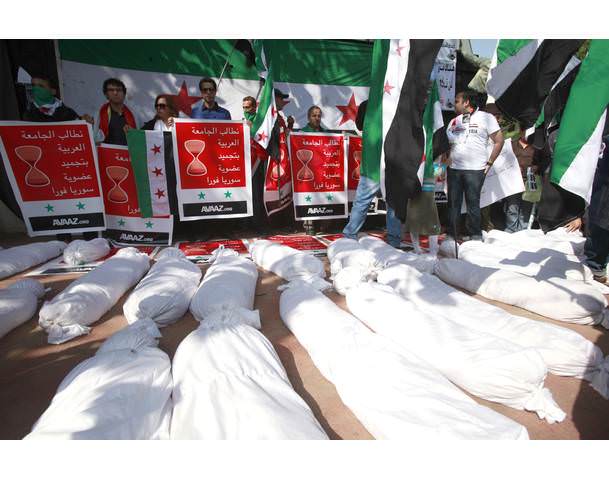 Amidst the Presidential elections, Operation Pillar of Cloud, Palestinian bid at the UN, unrest in Egypt and a host of other issues, the Syrian conflict has been relegated to the back pages of our papers. Despite all this, the brutality of the situation on the ground continues to deteriorate.

The death toll of this murderous rampage has now exceeded 40,000. That’s right; over 40,000 Syrians have died since this started almost two years ago. In addition, over 440,000 people have fled the region and are registered as refugees; many more probably out there unregistered. 1.2 million people have been displaced internally; nearly half of them are children.

Despite the conflict turning into a long bloody episode which has thrown the whole region into turmoil, Bashar Assad is still determined to fight to the end. He has vowed that he won’t leave Syria and will die if he has to; despite talk of him being allowed safe passage if he ends the civil war. “I am not a puppet, I was not made by the West for me to go to the West or any other country…I am made in Syria, and I will live and die in Syria”, he declared.

The latest round of diplomatic bickering between Syria and the West has been on the issue of Patriot Missiles and chemical weapons. Turkey demanded NATO to provide it with the system to deploy along the Syrian border for defense against cross-border firing. NATO has approved this request only on grounds that the Patriot system be used for defense. This also means that hundreds of American and European troops will be deployed to the frontier for the first time; the closest form of intervention to date. Britain has also stated that it will supply rebels with training and equipment. A no-fly-zone, similar to the one in Libya, is still out of the question in this conflict.

The second issue that is dominating the discourse is the use of chemical weapons. Reports have emerged that point to the possibility of the Syrian regime deploying chemical weapons on it’s on people. Unnamed US intelligence officials have said that poison gas might be used by the government. America has warned Syria that such action would cross a ‘red line’ and will necessitate retaliatory action.

However, the veracity of reports about these Weapons of Mass Destruction (WMD) continues to be questioned. Syria has accused the West of forging this intelligence to serve as pretext to invade the country; its Deputy Foreign Minister stated, “Syria stresses again, for the tenth, the hundredth time, that if we had such weapons, they would not be used against its people. We would not commit suicide”. Is the US trying to pull-off-an-Iraq?

Robert Fisk seems to agree with this assertion. He points out that stories of Hafez-al-Assad employing chemical weapons 30 years ago are nothing but fairytales. As a journalist covering the conflict, he distinctly remembers never coming across any evidence of their use – despite the bloody massacre that happened then, chemicals were not employed. And they won’t be employed this time either; in his estimation that is.

As one journalist rightly asked US government officials, why do these chemical serve as the ‘red line’ to finally take some kind of action? Is the death of 40,000 people not enough? Why does it matter what means is deployed to kill innocent civilians? The moral ‘red line’ has long passed – talk about these superficial limits and threats of retaliation appear to be nothing but a game of diplomatic ping-pong. Everyone is dancing around the issue, trying to buy time, hoping that the conflict takes care of itself.

Signs are starting to emerge that perhaps, God-willing, an end to this bloodshed might be approaching. Syrian rebels are approaching Damascus as government forces weaken with continued defections. There is growing talk of a looming battle-to-the-death in the streets of Damascus. Fighting around the capital and airport has intensified, forcing the latter to be shut down twice this week – the airport has been declared a ‘legitimate target’ by rebel forces. Rebels have also made strategic gains such as capturing military bases, disrupting supply routes and seizing weaponry.

As we sit in our homes, helplessly reading these stories in horror, prayer is the strongest weapon we have in our hands. Scholars advice increasing our acts of worship, our dua and recitation of Quran. Prayers such as Dua al-Nasiri have specially been written for times like these. Please keep the people of Syria in your prayers.

Ethiopian Muslims: Religious Freedoms, the Ahbash and the War on Terror