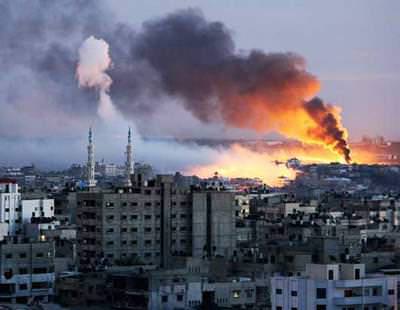 A ceasefire between Israel and the Palestinians appeared to be holding on Thursday after eight days of fighting in the Gaza Strip that claimed more than 160 lives.

Several rockets were fired from Gaza into Israel shortly after the ceasefire came into force late on Wednesday, according to Israeli police, but there were no casualties and no sign of an Israeli response.

Under the truce, which will be guaranteed by Egypt on the Palestinian side, Israel agreed to “stop all hostilities in the Gaza Strip by land, sea and air including incursions and targeting of individuals”. In exchange it committed “all Palestinian factions” to “stop all hostilities from the Gaza Strip against Israel including rocket attacks and all attacks along the border”.

Gazans awoke to discover the ceasefire had survived its first few hours. The mosque loudspeakers, largely silenced over the past week of fighting, resumed their dawn calls to prayer.

The area’s diminished and struggling fishing fleet once again put to sea, albeit under the watch of Israeli gunboats and constrained by tight restrictions on where they can work.

Gaza City’s notorious traffic jams once again began to build as Palestinians returned to work, or to clean up the wreckage of their shops and businesses. Convenience stores and cafes pulled up the shutters for the first time in a week.

But the incessant buzz of the Israeli drones, like an annoying unseen insect, is a constant reminder that a halt to the rockets is not an end to conflict.

Leaders on both sides were quick to claim victory. Khaled Meshaal, the exiled leader of Hamas, which governs the Gaza Strip, said at a press conference in Cairo that Israel had “failed in its adventure” when it launched attacks on Gaza and had been forced to accept Palestinian terms.

At least twenty six more Palestinians in the Gaza Strip have been killed in Israeli latest raids, raising the toll to 138, while fighters from Gaza fired rockets that killed two Israelis, bringing the death toll in Israel to five since Wednesday.

Palestinian emergency services said that two brothers in the southern town of Rafah were killed in a strike that hit their motorcycle on Tuesday night. Four others were killed in raids around the central town of Deir al-Balah, they added.

Israel also confirmed a strike on a building housing the offices of media organisations, the third such strike in three days. It said that it carried out a “surgical” strike on “a Hamas intelligence operations centre” in these building.

Al Jazeera’s bureau in Gaza was also damaged as a missile hit a building nearby, no casualties were reported. Israel’s military said it had attacked more than 100 “terror sites” in Gaza overnight “of which approximately 50 were underground rocket launchers”.

International efforts to finalise a ceasefire are being stepped up after a night of renewed Israeli air strikes in Gaza and sporadic Hamas rocket attacks.

US Secretary of State Hillary Clinton is due to visit the West Bank and Cairo following talks with Israeli leaders.

Palestinian sources had suggested a truce would be announced on Tuesday, but Israel said no deal was struck.

From Al Jazeera and BBC

Three Israelis died in the northern town of Kiryat Malachi on Thursday after a rocket fired from Gaza hit an apartment building. 15 Palestinians have died in the conflict thus far.

Israeli sources said two rockets hit Tel Aviv – one landed in the sea while another missile landed in an uninhabited area of Israel’s commercial centre.

Air raid sirens sent residents running for shelter in Tel Aviv, a Mediterranean city that has not been hit by a rocket since the 1991 Gulf War. Islamic Jihad, another Gaza-based Palestinian group, said that it had fired one of the rockets that hit Tel Aviv. Israeli forces are now amassing. Troops are moving toward the Gaza Strip and at least a dozen trucks carrying tanks and armoured vehicles were seen late Thursday moving toward the border area, while buses ferried soldiers.

Defence Minister Ehud Barak announced that he had authorized the army to draft reserve forces for possible activity in Gaza. The army said as many as 30,000 troops could be drafted.

“Let me tell you that all options are on the table,” Maj. Arye Shalicar told the CBC’s Derek Stoffel on Thursday. “If we need to send in ground forces or more strikes on terror activity sites or other surgical attacks on sites, we will do so until we bring quiet back to our southern region.”

From AlJazeera and CBC

The Israeli military has initiated a military operation in the occupied Gaza Strip. Israel killed the commander of the Hamas military wing, Ahmed Jabari, in one of some 20 airstrikes. This is the heaviest barrage on the Palestinian territory in four years in retaliation for renewed rocket fire on southern Israel.

Gaza’s health minister said 10 people were killed — two of them young children, as young as 11 months — while the Israeli military said its attack was just the beginning of a major offensive and warned it could escalate with a ground attack.

Jon Donnison of BBC News in Gaza City says: “Across Gaza there’s anger. There’s the sound of gunfire. The news is being broadcast from mosques. There are chaotic scenes at the city’s Shifa hospital. Ahmed Jabari was one of Hamas’s most senior figures. He was 46 years old and the head of the movement’s military wing the al Qassam brigades. He was hit by an airstrike as he travelled in a car through the centre of Gaza City. Israel has confirmed it targeted Mr Jabari in respone to Palestinian rocket fire in recent weeks. Israel will say Hamas had it coming. Palestinians will see it a major provocation. The fears here are it could provoke another war”

Hamas spokesman said: “This was a heinous crime that will have repercussions. The Palestinian government will call for the trial of those responsible for the crime, and for hitting a civilian area, but the Palestinian factions have the right to respond in a way they see fit.” It further stated that Israel had “opened the doors of hell on itself” and that “The occupation committed a dangerous crime and crossed all the red lines, which is considered a declaration of war. The occupation will pay dearly for this and we will make it regret the moment they thought about it.”

The Islamic Jihad group also issued a statement saying Israel has called for war in the assassinating Ahmed Al-Jabari. Islamic Jihad pledged to retaliate on the same scale. Israel Defence Forces tweeted that, “All options are on the table. If necessary, the IDF is ready to initiate a ground operation in Gaza”

Neighbouring Egypt condemned the strikes, recalled its ambassador to Israel, summoned the Israeli ambassador in Cairo and called for a urgent meeting of the United Nations Security Council and the Arab League.The Security Council is meeting in the coming hours behind closed doors to consider the Egyptian request. Egypt’s reaction is closely being monitored as this is the first time since the Arab Springs that a conflict of this nature has erupted in Gaza.

Muslim Brotherhood in Egypt stated : “The occupying state has to understand that the changes the Arab region, and especially Egypt, have witnessed will not permit that the Palestinian people be put under the hold of the Israeli offence in the same way as the past.”

Britain also urged restraint and Russia said it was “very concerned” about the escalation, while Washington said it was watching developments in Gaza “closely.”

Who Started The Latest Round of Escalation: Gaza Palestinians or Israel? A Timeline.

Elevate the Discourse Before Voting Becomes The New Halal Meat