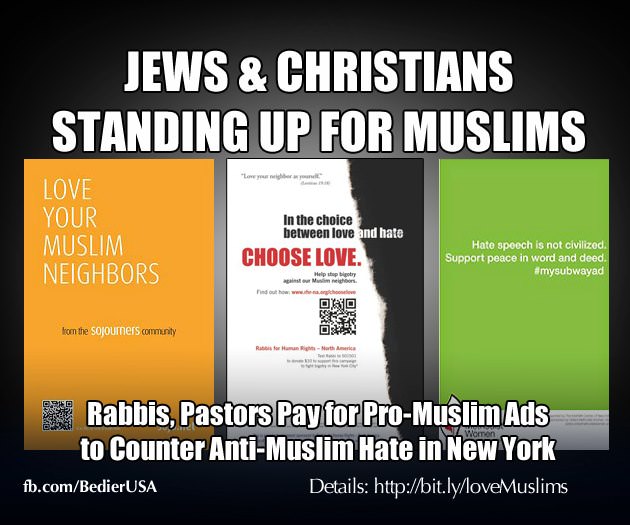 Pamella Geller and her fellow Islamophobes made headlines a few weeks ago with their vitriolic anti-Muslim advertisements in NYC subway stations and else where. Their message equated  Muslims to “savages” and “jihad” to terrorism. To respond to this bigotry , a remarkable group of Christians and Jews have started a counter campaign which encourages tolerance and love for Muslims.

Exemplifying the motto of ‘Love Thy Neighbor’, campaign organizers have leased out advertising space in subway stations to put up posters which counter the message of the anti-Muslim ads. One of them reads: “In the choice between love and hate, CHOOSE LOVE. Help stop bigotry against our Muslim neighbors.”  Another one says: “Hate Speech is not civilized. Support peace in word and deed”. The last one states quite simply,  “Love your Muslim neighbors”.

This outstanding initiative was headed by Rabbi’s For Human Rights, Sojourners – a Christian social justice group and United Methodist Women. Each of the three groups ran separate advertisements urging tolerance and denouncing the bigoted message of Gellar’s ads. The groups said their campaigns were coincidental. At some locations, their ads were placed immediately adjacent to the anti-Muslim posters. This juxtaposition is reflective of the unique experiment that is America; the very good of its people and the very ugly, existing side by side. 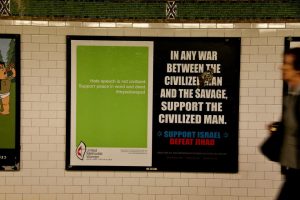 Rabbi Jill Jacobs explained the purpose of her campaign, “I want to spread the message that 1800 rabbis– along with the majority of the American Jewish community–believes in partnership with our Muslim neighbors. We, of course, oppose all acts of terrorism. We will not, however, allow the actions of a small minority to be an excuse for dehumanizing an entire people.” Following the spirit of the of the Golden Rule, she further explained, “We know what it’s like to be a minority and we know what it’s like to be the target of discrimination, and that’s why, as Jews, because of that history, we have more of a responsibility to speak out when anyone is being discriminated against.”

The past several weeks have been challenging for American Muslims. The anti-American riots across the Muslim world and the killing of the American Ambassador to Libya  has lead to a great degree of apprehension in the community. From suspicious glances to clandestine conversations; Muslims were the talk of the town. Being inundated with stories like that of the Joplin Mosque which was burned down, one naturally begins to feel alienated and questions their standing in the public’s eye.

This campaign is enough reason to throw away those apprehensive feelings. Its a testament to the good of the American people, the vast majority of whom stand by their Muslim neighbors and will speak up to defend them. Stories like these need to be broadcast across to the Muslim world; this is what America is made of- not the pervert who produced the shameful movie debasing the Prophet.

Lastly, this campaign demonstrates the importance of exercising the power that rests in the moderate silent majority. These people could have very well decided to shrug their shoulders apathetically or perhaps just nod with disappointment like most of us. Why bother explaining that extremists like Geller don’t represent Jews? They could have complained about finances associated with leasing ad space and a million other things.

But No! They decided to speak up, to make their voices heard. They realized that the cost of remaining silent was not worth it. For them, making fellow citizens feel welcome in their own land was something important enough to invest time and money in  – and it should be for the remainder of us. This campaign is an important lesson for the Muslim community on the impact raising our voices can have. Faced too frequently with the negative externalities of religion, this episode reaffirms the generosity, goodness and goodwill that rests at the root of religious teaching and is urgently in need of revival.

Actions Items: Call/Write to the campaign organizers thanking them for their efforts

A Personal Account of Hurricane Sandy from New Jersey

The Other Side of Muslim Rage