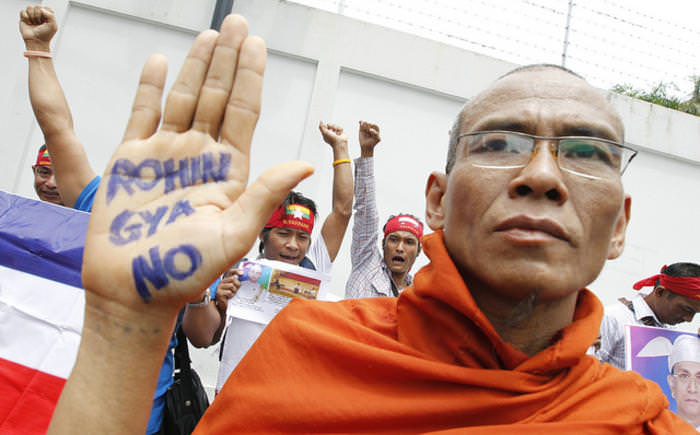 MuslimMatters is pleased to announce a new, regular series on the ongoing Rohingya crisis in Burma presented by Fiza Asar, a talented communications professional based in the United Kingdom. She is extremely interested in the “other”-ing of certain peoples by media and the interplay of media with politics, culture and identity-making, also be sure to read the first installment in this series Eye on Burma: an Introduction.

For the last quarter of a year, the atrocities against Rohingya Muslims have increased sharply and their lives have been afflicted with horrendous atrocities and persecution. Over 100,000 people have been left displaced since June of this year alone. Bloody clashes and forced migration are major causes of health insecurity, starvation, and the gendered atrocities against women including sexual assaults and rapes.

Women get a rough deal seeing their husbands, brothers or fathers displaced and unavailable. They suffer when they see their children starve to death. In Burma, since June this year, there have been dozens of recorded stories where women and girls have been assaulted and gang-raped by soldiers.

On the other hand, two women have increasingly been disappointing in their response to the crisis. Sheikh Hasina of Bangladesh earlier this year asked international organisations to stop helping Rohingya “illegal” refugees from crossing the borders into Bangladesh. Similarly, Burma’s pro-democracy leader and Noble Peace Prize winner Aung San Suu Kyi has been under continued scrutiny for her inability to speak up about the atrocities against the Rohingya.

Suu Kyi has been in the U.S this month to receive Washington’s highest honour, the Congressional Gold Medal for speaking up about the down-trodden of Burma. However, in the case of the Rohingya crisis, Suu Kyi has been rather muted, tip-toeing on the subject and merely saying that “rule of law” should be returned to the area.

When Suu Kyi accepted the Noble Peace Prize, she remarked that “the oppressed and the isolated in Burma were also a part of the world.” Justice activists around the world have been disappointed by this show of diplomacy – they would like the champion of oppressed and isolated people to to recognise the atrocities Rohingya are facing, and the plight of a people who are considered stateless because neither Burma nor Bangladesh want to accept them.

Rohingya who have been living for centuries in Burma have still not been granted citizenship of the country – they speak a dialect of Bengali and are ethnically Chittagonian Bangladeshis. Bangladesh refuses to accept them in their country as they are considered Burmese. The question of Rohingya Burmese citizenship whose movement is hence restricted as is their access to education and employment has not been commented upon by Suu Kyi.

The international community has mostly been silent on the subject only recently beginning to speak up about the topic as is shown by Organisation of Islamic Cooperation (OIC) statements and the U.S department delegation’s visit of the troubled region. The U.S department delegation followed its trip of Burma with a trip to Bangladesh where it urged the Bangladeshi government to support the displaced people and keep its border open. The OIC and the UN Special Rapporteur for Human Rights in Burma has called for an independent investigation into the crisis.

Despite this Burma has not reacted to international concerns whether it is in the form of Burmese government or its opposition in the form of Suu Kyi, who are perhaps worried about losing their supporters within their country if they spoke in favour of the Rohingya. What other countries can do is mediate and urge the Burmese government to provide justice within its borders and solve the crisis. The answer always has to come from Burma.

What we can do?

We, the digital age people, can share articles, news pieces and talk about Rohingya crisis on Twitter, Facebook and other social media networks. The more attention this topic is given on the new media the more the chances of it being picked up on all media and hence by the governments. This will add pressure not only on the international governments but also perhaps eventually on the Burmese government. We can work towards it one step at a time.