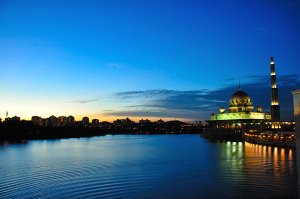 During the month of Ramadan, our masajid are filled.

When we know the status of something, it is easier to honor it. Unfortunately, Muslims today do not honor the mosques as they should be honored. We know that the masjid is the House of Allah, but we fail to internalize the nobility this title holds. When any object or person is connected to the Grand Name of Allah, it shows prestigious rank. For example, Allah

calls some of His exclusive slaves, “ebaadur-Rahman”, the slaves of the Most Merciful. By connecting them with His Name; Allah is honoring them. Similarly, the masajid are known as “Buyutullah”, the Houses of Allah. Of all the places on this earth, the Prophet

. Think about it: Our Lord loves the masajid! Even the name holds great honor; “masjid” literally means “place of prostration (sujud)”. They are the greatest places to worship Allah and to remember Him. Allah

also says, “In houses (mosques), which Allah has ordered to be raised, in them His Name is glorified in the mornings and in the afternoons or the evenings.” (24:36) This ayah teaches us the two main rulings of the masajid:

a) “To be raised,” meaning to build them, to honor them and to clean them.

b) “In them His Name is glorified,” meaning we worship Allah in the masajid. This includes all acts of worship such as praying, reading Qur’an and also learning and teaching.

Not only does the masjid itself have a great honor, but Allah has honored certain people because of their relationship with the masajid.

1- On the Day when there is no shade, Allah

will give shade to a group of special people. Of these noble people is a person whose heart is attached to the masjid. (Agreed Upon)

2- For those who attend the masjid for learning purposes, the Prophet

said, “Any group of people that assemble in one of the Houses of Allah to study the Qur’an, tranquillity will descend upon them, mercy will engulf them, angels will surround them and Allah will make mention of them to those (the angels) in His proximity.” (Muslim)

3- For those who attend the masjid continually for prayer, the Messenger

said, “If anyone goes back and forth to the mosque [to attend the prayers], Allah will prepare for him a feast in paradise as often as he goes back and forth.” (Bukhari and Muslim) Another narration states, “If anyone purifies himself in his house, and then walks to one of the houses of Allah to fulfill one of the obligations laid down by Allah, then [each one] of his steps will erase one of his sins and the next will raise his degrees.” (Muslim)

4- Sincerely building a masjid for the sake of Allah guarantees a house in Paradise. The Prophet

In the Qur’an and Sunnah, we find how we as Muslims should honor and act in our mosques. By learning and acting upon these etiquettes we will, God Willing, instill within ourselves the love and respect they deserve.

10 Etiquettes of the Masajid

1) Honor and revere it. Allah

2) You are Allah’s guest, so act in the best way. It is stated in a Prophetic narration that, “[The one who goes to the masjid] is the guest of Allah.” (Tabarani) Where else can you be a guest of Allah?!

3) Leaving your house with wudu’ (ablution). In the same narration as above, the Prophet

said, “Whoever performs wudu’ (ablution) in the best manner, then leaves to the masjid, then (know) that he is a guest of Allah, and it is incumbent on the guest to honor his host.” (Tabarani) The first two etiquettes are mental preparations while this one is a physical preparation. In another narration, the Messenger of Allah

said, “He who purifies (performs wudu’) himself in his house and then walks to one of the houses of Allah for performing an obligatory prayer, one step of his will wipe out his sins and another step will elevate his rank (in Paradise).” (Muslim)

4) Dressing with nice clothes that are clean. Allah

says, “O Children of Adam! Wear your beautiful apparel at every time and place of prayer.” (7:31) Imam Sa’di

explains this ayah by saying, “[wear your clothing] meaning cover yourself properly with clothing that is clean and nice. This is beautiful because firstly you are covering your private parts and secondly you are doing so with clothing that is clean and pleasant.” Usually the discussion of clothing in Islam is centered around women, but this ayah is addressing both genders. Both genders should refrain from wearing form-fitting clothes, clothes that emanate the odor of food, and clothes that do not cover us properly.

5) Reading the Prophetic supplication for leaving to the masjid. http://makedua.com/display_dua.php?sectionid=12 Why does this supplication keep mentioning “nur” (light)? The scholars say because the Prophet

mentioned in a narration that, “salah (prayer) is light”. This means that prayer is a light in the heart of the believer, and it will be light for him in the hereafter. In this supplication, the believer asks Allah to increase him in this spiritual light and to surround him with light from all directions.

said, “Eman has sixty odd or seventy odd branches. The uppermost of all these is the Testimony of Faith: `La ilaha illallah’ (there is no true god except Allah) while the least of them is the removal of harmful object from the road. And shyness is a branch of iman.” (Bukhari and Muslim) Shaykh ibn Uthaymeen

says in his explanation of this narration, “If removing harm from the path is a sign of iman, then placing harm there is a deficiency in iman. Today, some people park their cars wherever they want for long periods of time and in the middle of the road, no matter if the area is wide or narrow, but this is not a trait of a believer. A believer is one who has modesty in his heart and is empathetic to the needs of the people; loving for them what he loves for himself. How can you be an example while you park your car in the center of the road and you do not think about the hardship it causes the people? Sometimes they will block the path and will park in front of the masjid’s entrance, constricting the road and bringing about difficultly for the people when they leave the Friday prayer. This is incorrect.”

said, “It is from the sunnah (Prophetic tradition) that we enter the masjid with our right foot and leave with our left foot.” (Hakim)

8) Greeting the masjid. How do you greet the masjid? The Prophet

said, “When one of you comes to the mosque, he should pray two rak’at before he sits.” (Agreed Upon)

9) Lowering voices and refraining from disturbing those who are praying. Abu Sa’id al-Khurdi (may Allah be pleased with him) reports that the Prophet was making seclusion (i’tikaf) in the mosque and he heard the people reciting aloud. He removed the covering and said: “Verily, each of you is in a private conversation with his Lord so you should not disturb each other. And you are not to raise your voices against each other in the recitation.” (Abu Dawud) The Companions did not like to raise their voices in the masjid. Umar

advised two men to keep their voices down while in the masjid of the Prophet. (Bukhari) This does not mean we cannot talk in the masjid, but it is yet another way to revere the House of Allah. The author of Fiqh us-Sunnah, Sayyid Sabiq

says, “It is not allowed to raise one’s voice in such a way that it disturbs others’ prayers, even if it is done while reciting the Qur’an. Teaching or imparting knowledge (to others) is exempt from this.”

10) Maintaining the masajid by keeping it clean and smelling nice. ‘Aishah

reports that the Prophet ordered that mosques be built in residential areas and that they be cleaned and perfumed. (ibn Hibban) We also learn from a narration in Bukhari that a woman used to clean the masjid of the Prophet died. One day, the Prophet

asked about her and the Companions told him that she passed away. He went to her grave and prayed the funeral prayer for her. This hadith shows us how much the Prophet

loved this woman for cleaning the masjid.

Now imagine practicing all of these etiquettes while going to the masjid…How will we act? Will it make us respect the masajid more?

These etiquettes are taught to us by Allah and His Messenger, so we should practice them diligently in hopes of coming closer to Allah and being among those whose hearts are attached His Houses.