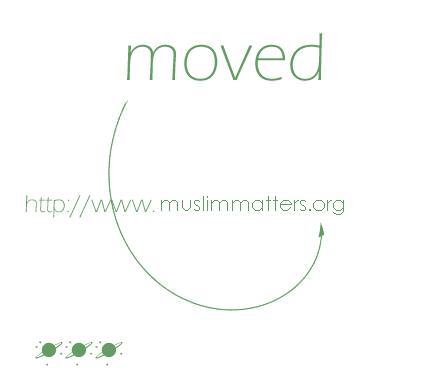 It was November 2006. I had belatedly joined the blogging band-wagon, which had significantly matured as a social media outlet. I called my blog at amadsden.blogspot.com “Muslims of a Muslim Mind” and religiously put up a new article almost every day. My first post was quite simple:

–  I have a lot on my mind. I have too many things to accomplish. I don’t have forever.

I wanted to write about USA politics, a departure from the old days of “politics=haram”. But, I was still very much into the Muslim conflict politics. So, my focus was raising the “orthodox voice” or at the time “not-salafi but salafi voice” because the blogosphere was dominated by what I preferred to call, “pro-regressives”, a term that may have been coined by the illustrious, in-your-face, “Dr. M”.

My personal blogging journey quickly introduced me to some of the more popular Muslim bloggers of the time, Tariq Nelson and Umar Lee. I struggled to figure out what end of the “manhaj spectrum” they sat on, because it wasn’t quite obvious from their postings. Soon I was talking to both of them offline and extending the blogging relationship beyond. As a fan of their work, and also (to be honest) to expand my own reader-base, I joined their “niche” to some extent.  I also discovered (hard not to) “Mujahideen-ryder”, the salafi-turned-sufi-turned-soup bro, and I still remember having my first 100+ comments post arguing about something as petty as what was a better Islamic conference: RIS or TDC. This was also the time when Imam Hamza Yusuf was slowly becoming palatable to me… it took a little while longer before I first found courage to promote his work.

Not long after I started blogging, I realized that many of my firmly-held, deeply-set religious beliefs had a hard time standing up to public scrutiny. It is one thing to believe what you believe in the safety of your own mind and home, but it is another to take it public and let the people test you for it. So, blogging became a positive experience for me. From arguing for hate, I started learning how to discuss how to love. From enmity to brotherhood. From manhaj-wars to wars for the good.

I remember checking my blog’s stats every day – one hundred to two hundred hits. I had set blogspot settings to receive an email for each comment, and each comment was a small victory. People who have blogged or worked hard to get a following, whether on facebook, twitter, or on a blog, know what I am talking about. You can put tens of hours into a post, but if no one reads it or engages with it, you feel like a complete failure. It’s like the tree that fell in the forest, did it make a sound if no one heard it? That’s the same with a blog-post, did it really mean anything if no one read it?

Around this time, we had a particularly bold blogger, “Ali Eteraz”, an excellent writer, but with a habit of writing what I found terribly offensive. I still remember one of his post’s titles, “How to Denude a Niqabi,” I think.  I could not stand for this nonsense and eventually got banned on his site! In retrospect though, I think he had a lot of depth to offer, and he had his own style of doing so. Also around this time altmuslim was doing remarkably well and I felt that someone had to stand up to these “proggies”.  Who would have guessed that only a few years later, I would write a piece for altmuslim, and be friends with Shahed Amanullah!

The lessons I have learned are simple yet so profound – people make contributions towards the purification of the ummah in different ways and with different styles. In general, the vast majority of Muslims who are doing Islam’s work are sincere, even if they make mistakes. So, I now tell new internet cowboys to chill out and get to know others before jumping to conclusions.

On the one hand, I had a driving force to “fight those soiling Islam”, and on the other, just a plain desire to raise the voice of the Islam that I knew and practiced, and fill what I believed was a big void in the blogosphere.

After a few months of struggling with bringing people to my blog, and noting the tendency of readers to jump from one blog to another, the solution seemed obvious: Bring together the various voices of Islam, mostly like-minded, under one umbrella and add a cornerstone Shaykh.

With this mission in mind, I contacted my college-mate, friend, and Shaykh, Yasir Qadhi, who was quick to latch on to the idea. Shaykh sahib (as I fondly call him) did not want his own site because he felt uncomfortable with the idea of a yasirqadhi.com site. He did not want something that he had to carry by himself. He was looking to be part of  a website that provided him an official platform but not something that was “his 100%”. Also, interestingly, this is the first time many of you may have heard this, he thought that I should NOT be part of it! He told me frankly that I could be divisive and hard-nosed and that it may affect the overall site, including him. And to be quite honest, he was not wrong about the “old Amad”.  However, after some thoughts and prayers, the website needed a driving force, someone who took personal ownership, and wrongly or rightly, that someone became me.

Having secured Shaykh Yasir’s okay, I proceeded to collect a diverse, “A-team”. To be honest, I don’t quite recall the order of how all this happened, but that is not really relevant anyway. There was “lotaenterprises” run by Omar, or otherwise fondly known as ibnabeeomar. Lotaenterprises was charming, witty and had the right sort of “which-shaykhs-does-he-follow pedigree”, so an obvious choice.

Then there was a young 15 or 16-year old sister in Canada, who I had recently discovered with an eerily similar named blog to mine, “Musings of a Muslim Mouse”. She called herself “AnonyMouse”. This teenager remained anonymous for many years, until she revealed her identity as Zainab. You will be surprised to know how many stalkers an anonymous voice can have; the curiosity of who this anonymous sister was led to Zainab’s author profile of “AnonyMouse” getting the second highest hits after Shaykh Yasir’s. Thanks to all the freaks out there!

From local connections in Houston, I knew of Ruth Nasrullah, a convert to Islam who was trained in journalism, which would help the professionalism of our site. And finally we had Sam Zamanian, or Ahmad al-Farsi (many still don’t know what his official name is), an Iranian-origin convert to Islam, who was studying at MIT at the time.

Once we got the team’s initial okays, we started having an email conversation about the new blog. What to name it? But more importantly what its purpose was. And some would say that they still don’t quite clearly know MM’s purpose, but sometimes vague visions can lead to fantastic goals because they permit a lot of flexibility and malleability.

The question of “why this blog” was never fully answered. We went in circles and the only clear idea we could all agree upon was that we needed a voice for “mainstream”, “average” Muslims on the blogosphere. We also agreed that a group blog would provide much more exposure and many more readers than individual efforts. Having Shaykh Yasir’s name attached to the blog would give it credibility and take it off quicker than any of us individually could expect.

The naming of the blog was harder. There was “saheefa.com” and a variety of other names. I also remember seeing a website “othermatters” or something to that effect, and “matters” rang a bell. We wanted a name that would immediately mean something in English. Something easy to remember and neutral. And so we landed on MuslimMatters.org and the rest is history.

In order to beef up our Islamic scholarship and get some popular names on-board, I contacted Shaykh Tawfique Chowdhury, someone I had the pleasure of doing hajj with when he was still a young student at University of Madinah. Additionally, we got Abu Bakr on-board, a friend of Omar, and someone who was already writing Islamic material at islamicsciences website. Finally, we got a nod from Muslim intellectual Amir Butler from Australia. For the most part, most of these personalities did not quite latch on to MuslimMatters and only one still remains nominally with us.

On March 10, 2007, I announced that I was to stop writing on my personal blog and jump on to MuslimMatters. You can still see this posting here. And the rest, as they say, is history :)

An “Icon” Became a Student: How I Joined MuslimMatters