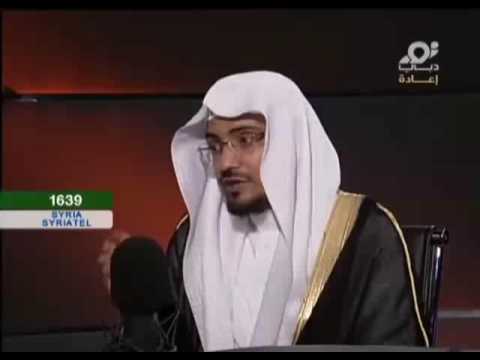 The following is a translation to these valuable words of advice by our respected Shaykh Saleh Al-Meghamsi in this clip:

In this age of ours, we see that usage of the internet has become widespread. This (internet) has granted people a means through which they write without being known.  Yet, the fact that a person can write while remaining hidden in name and person may cause them to develop the feeling that they are not under watch. And consequently, they cannot be called to account by any ruler, judge or police.

Here, the reality of one’s iman is truly revealed. As for he who fears Allah, he would never be audacious enough to write something that he knows will anger Allah

, such as attacking the honor of a believer and recklessly speaking according to one’s whims.

At this point, the extent of one’s fear of Allah is also shown because if you write whatever you like to write, the leader, ruler, judge or security personnel will not be able to reach you if they actually wanted to. So the only remaining matter here is that which is between the slave and his Lord. So if the slave desires to know their level of fear of Allah, then this is one of the times in which true fear of Allah, ta’ala, can be tested.

So the slave should be cautious that he is exposed to the honor of the believers, or that he says a word or a statement about a Muslim that spreads among the people, until he faces its evil consequences, maybe even earning him a bad end to this life.

For, by Allah, if the living were able to see the state of the people of the graves, many of them would turn away from what they are upon (of sinful deeds). Allah has told us about the state of the people in their graves  – and even then, it remains a fact that the being told about something is not the same as living of facing it. But, there are slaves of Allah who – may Allah make us among them – when they read the Quran, they know with certainty that what Allah informed about is true. For them, the Quran serves as a warner as well as a barrier that stands between them and the limits of Allah. Does Allah not say:

“Then in what statement after Allah and His verses will they believe?” (Al-Jāthiyah 45:6).

So he who knows that one day, he will be an inhabitant of the grave and face questioning, his limbs will desist from disobeying Allah.

1. Shirk: and this is not forgiven by Allah.
2. Something between you and Allah, and this is closer to forgiveness.
3. Something that has to do with the rights of the creation. As for this, Allah does not let it go, so much so that the sheep without horns is allowed to take revenge from even the horned sheep.  Although, in the end, they will both be reduced to dust.

How then is the case of a Muslim who prays, fasts and remembers Allah, yet his honor was attacked and his status was lowered through injustice and aggression?

Whoever desires to remind and awaken himself, then he should read the ahadith of the Prophet

wherein he describes the life of the barzakh (afterlife). For, in them there are from among the lessons and reminders, those which cause one to fear Allah and be conscious of Him in secret and in public.

One of the righteous (whose name I cannot recall now) advised one of the khulafaa of Bani Ummayyah reminding him that, “if so and so your brother (meaning the khalifah before you) could inform you of what he is facing now (in the grave), you would cease from what you are doing now.”

A Muslim’s Guide to Student Loans in the U.S.