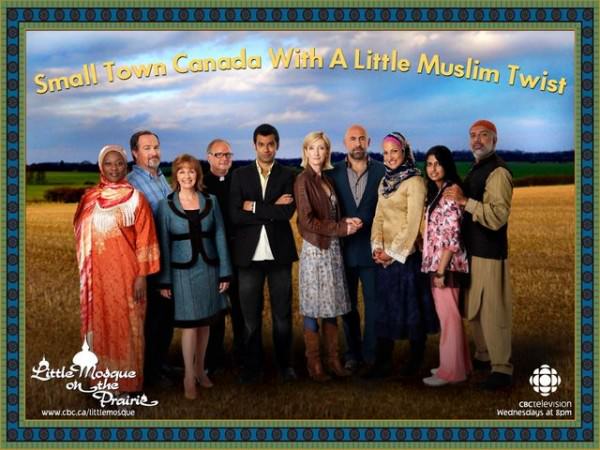 “What? She’s white, and Muslim?” exclaimed my friend as he watched Sarah Hamoudi pray during the series première of Little Mosque on the Prairie. Having grown up in a city made up largely of immigrant Muslims, I guess he had assumed that Islam was a religion reserved for people of colour. We chuckled through the terrorist jokes, Babar’s sermon about ‘Smashing the American Idol’ and the clashes between liberals and conservatives at Mercy Mosque. The first sitcom about Western Muslims had just aired and it was making a difference already.

I was in my final year of high school at that time and I clearly remember the buzz surrounding the show. Some expressed opposition to the name, which for them violated the sanctity of the classic, Little House on the Prairie. Most were excited to see a fresh, new and unique comedy about Canadian Muslims. An audience of 2.1 million people tuned in for the first episode; a record breaking and unheard of rating in Canada. The ratings declined over the years, but they were good enough to sustain it for six seasons.

It was a proud moment for me to see a show about Muslims air on national television. Along with the regular post-episode discussions on House and The O.C., I could now joke with my friends about Ammar’s latest debacle or Babar’s classic rants. At a time when Muslim youth were increasingly insecure about their identities, a show like Little Mosque helped boost self-esteem and self-worth for many.

But Little Mosque never set out to accomplish any of the things I’ve mentioned. It wasn’t a show that was aimed at educating people about Islam or solving problems faced by Muslim youth. It was a sitcom that was meant to be funny; it just happened to be about a small Muslim community. It was Islam’s Cosby Show. In the post 9/11 times where any normative depiction of Muslims in media was deemed to be too controversial, the CBC made the bold move of creating a whole show about Muslims. Not only were the central characters Muslim, the show revolved around the mosque which played a key role in the community’s life. The CBC and Zarqa Nawaz, the show’s creator should be recognized by the Muslim community for this historic feat.

The criticism and the lack of support at times from the Muslim community were disheartening for me. Sure, if you don’t like the show, don’t watch it. I agree that it wasn’t a laugh-out loud comedy, and the writing was hokey and uncreative at times. But dismissing the show on grounds that the characters weren’t observant enough, or that Zarqa Nawaz had some secret liberal agenda, was disappointing. Are you seriously hoping for a sitcom where the women dare not speak to a non-Mahram? Where the community isolates itself from the kuffar? Where the Imam goes around warning people of the evils of Western civilization?

Little Mosque had its shortcomings when it came to accurately depicting the orthodox Muslim community. Yes, the Imam didn’t have a beard, had an awfully nonchalant attitude towards apostasy and might have shaken hands with the opposite sex in a few episodes. Zarqa Nawaz once explained that some slips happen because almost everyone on staff, from the director to cameraman, is non-Muslim. She alone couldn’t possibly monitor every minutiae of the filming. Some aspects of the story, such as the Ammar’s liberalism, are obviously intentional. You might not like it, but it’s just a sitcom at the end of the day.

These shortcomings are miniscule compared to the number of things Little Mosque got right. The sitcom was the most accurate depiction of Muslims to date and succeeded in bringing the mainstream Muslim community to the television screen, especially at a time when secular and ‘progressive’ Muslims get preferential treatment. It represented all the characters we find in our mosques; the uncles, the converts, the feminists and the rebellious teenagers. It captured the conflicts between the young and the old, the tension between the liberals and conservatives. 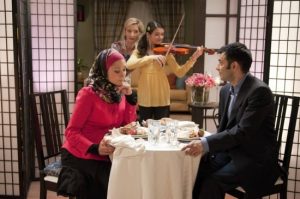 It showcased, with great sensitivity, the first Muslim courtship on television; a social phenomenon which is still under development amongst Western Muslims. Peer-pressure faced by Muslim youth at high schools was also brought to light, as was their conflicts with immigrant parents. I would argue it even addressed issues which the Muslim community faces; I think organizing an ‘Islamapalooza’ is a great idea and partial hockey boards offer a reasonable solution to the prayer barrier controversy. Because of Little Mosque, people now know that Muslim women take the hijab off at home or that it is possible to be Muslim without having to wear one.

Little Mosque on the Prairie’s idealistic worldview represents hope for our community in many ways— excluding its fiqhi failures of course. Our mosques today have closed doors and an unwelcoming atmosphere; not only to people of other faiths but to segments of the Muslim community as well. Women continue to be marginalized, and converts still grapple to find acceptance. I don’t see our Imam playing checkers with the Reverend down the street, nor do I see bona fide bonds of friendship like the one between Babar and Thorne.

Mercy Mosque’s setting was similar to the mosques of Muslim Spain, where the Christians and Muslims at times shared a common building for their place of worship. The series ended with the Muslims welcoming the Christians into their newly built mosque after their church was burned down. The new mosque was constructed in the image of Al-Rashid Mosque. This was Canada’s first mosque and was built by donations from Jews and Christians, as the Muslim population in 1938 was minuscule.

Like Al-Rashid Mosque, Little Mosque reminds us that the vision of a pluralistic community co-existing is neither new nor impossible. Its message was simple: Set aside your prejudice, give up your spiritual pride and be a good neighbor.

Website Review: Great Muslim Quotes – Inspiration from the Past & Present