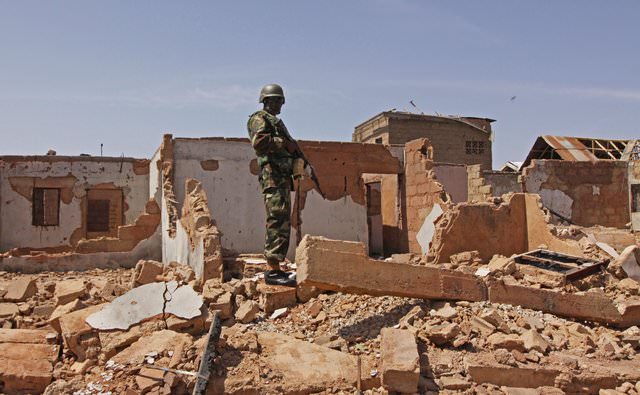 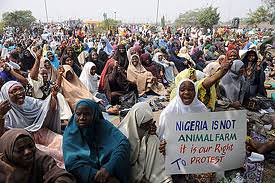 Is the violence in Nigeria centered around Muslim-Christian tensions and the implementation of Sharī‘ah by the Boko Haram? Jean Herskovits, a professor of history at the State University of New York, writes:

…the news media and American policy makers are chasing an elusive and ill-defined threat; there is no proof that a well-organized, ideologically coherent terrorist group called Boko Haram even exists today. Evidence suggests instead that, while the original core of the group remains active, criminal gangs have adopted the name Boko Haram to claim responsibility for attacks when it suits them.

She has written on Nigerian politics since 1970.

Muslim groups in the North Nigeria have also denounced the violence, though many in the north remain angry over the high unemployment and poverty crushing the region as politicians embezzle billions of dollars of the country’s oil revenues.

Mainstream media reports that the targeting of minority Christians in the North triggered reprisals by Christians on Muslims in the south, even though the majority of the two communities have shown in the past they can live in peace. That tension over the Christmas Day attacks resulted in retaliatory attacks on mosques in recent weeks. Last Tuesday, during the fuel price protests an angry mob attacked a mosque and school in southwest Nigeria, killing at least five people and forcing 3,000 Muslims to flee the area.

But after our post on the Church Bombings in Nigeria, the following insight was shared by a Nigerian, Umm Sulaim, who lives there. She is an active commentor on MuslimMatters. She gives us background on the ethnic conflict in the region that crosses religious lines.

The Religion Of Pandemonium

On the exterior, it appears Islam spurs the actions of the dominating inhabitants of Northern Nigeria.  Everyone is led to believe so.  Christians understand the discrimination against them is religious. The deception is revealed when one is a Muslim and happens to be of a different tribe than the Hausa-Fulanis.

Non-Hausa-Fulani Muslims are being attacked and murdered just as easily as Christians. The Islamic teacher of an ustādh of mine was murdered in Kaduna. Imagine how old he was.  When his home was invaded by the Hausa-Fulanis, he informed them that he was a Muslim.  The response he got was: This is not religious, but tribal.

Here in Sokoto, a Christian acquaintance tried to intervene to halt the brutal assault of a Muslim woman by Hausa-Fulani men.  Pleading with the attackers, she reminded them the victim was a Muslim like them, why were they beating her up to the point of lifting and smashing her on the ground?  A Hausa woman retorted: This is not about religion.  It is tribal.

No one spoke out against what was going on, except one Muslim woman. Eventually, the Christian summoned the victim’s mother, who naturally was determined to report the incident to the police.  The former pleaded it would only make things worse and convinced her against it. Then Hausa-Fulanis threatened to kill the brother of the Christian for informing the woman of what they were doing to her daughter.

If religion is involved in the conduct of Hausa-Fulanis, it is not Islam, but a newly-found religion: Hausa.

This narrative evokes comparison to a similar story that led to the breakup of the Sudan. Recent reports from the predominantly Christian South Sudan confirm that centuries old ethnic violence is ravaging the newly independent nation, which has had billions in aid pumped in by Western countries; countries which actively supported its bid for independence from pre-dominantly Muslim North.

“Eight thousand fighters just besieged this small town in the middle of a vast expanse, razing huts, burning granaries, stealing tens of thousands of cows and methodically killing hundreds, possibly thousands, of men, women and children hiding in the bush.

The raiders had even broadcast their massacre plans.

‘We have decided to invade Murleland and wipe out the entire Murle tribe on the face of the earth,’ the attackers, from a rival ethnic group, the Nuer, warned in a public statement.”

Poverty can Divide and can Unite

Back in Nigeria there have been several strikes over the fuel subsidy crisis, uniting the people of the country despite the perpetrators of violence who seek to tear them apart. Tolu Ongunlesi, a journalist says,

…I have observed, and participated in the series of public protest rallies now known as ‘Occupy Nigeria’ — tens of thousands of Nigerians across the country and in the Diaspora, trooping to the streets to protest the insensitivity of a government that cut fuel subsidies benefiting a largely poor population whilst itself guilty of astonishing levels of profligacy.

Labor unions ended the crippling nationwide strike Monday in Nigeria after the country’s president, Jonathan Goodluck, partially restored subsidies that keep gasoline prices low, though it took soldiers deployed in the streets to stop demonstrations in Africa’s most populous nation.  In some cities, the youth carried placards with inscriptions such as “Good luck, stop bombing our brothers, you are the Boko Haram,” “Nigerians say no to fuel subsidy removal,” “we say no to fuel subsidy removal, hardship has no religious face,” “prosecute the oil cabal now,” “removal of fuel subsidy is worse than Boko Haram,” and “no democracy in Nigeria: be informed Mr. President,” among others. From MyOndoState.com