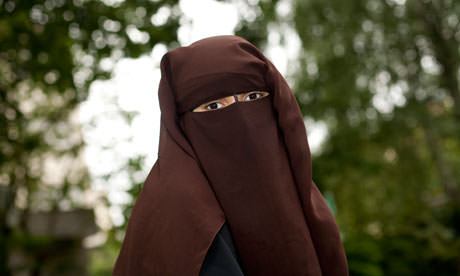 A 32-year old mother is set to become the first woman imprisoned by the French government following its introduction of the niqab ban in April.  Hind Ahmas, courageously flying the flag for women’s freedom, was first arrested on 11th April in Paris.  She refused to pay the £100 fine and abide by the court’s sentence that she spend 15 days learning citizenship.  ‘There is no possibility of me removing the veil,’ Ahmas said ‘I’m not taking it off. The judge needs citizenship lessons, not me.’

Ahmas was not even allowed into her own trial, due to the veil and now faces up to two years in prison and a £27,000 fine.

She has launched a pressure group ‘Do Not Touch my Constitution’ along with Kenza Drider a fellow niqabi who is running for president in Spring.

Since France announced its ban in April, Belgium has swiftly followed suit.  Women wearing niqab there, do not face fines, rather automatic seven day prison sentences.  In Italy, the right wing Northern League have resurrected a 1975 law against face coverings resulting in the issuing of fines in the North. The Italian government is currently drafting anti-niqab legislation, as is Denmark and Austria.  The Netherlands and Switzerland are actively pushing for bans and it has been debated although sidelined in Britain.

Whilst the furor over the ban was intense earlier this year, dialogue has since died down.  Muslim bloggers and newspapers were active in their responses and much discussion ensued on forums by email.  A website was created in Britain to better educate the public about the niqab.  Yet the ummah seems to have fallen silent.  Are there no men or women prepared to stand up for the rights of Hind Ahmas?  Must our best hopes rest on the shoulders of Rachid Nekkaz, the French Algerian businessman financially supporting fined women, but who does not actually believe in the need to wear niqab.

Since the ban, Muslim women have been increasingly stigmatised and abused in French society.  An Open Society Foundation report which surveyed 32 French women following the ban, described many cases of verbal and sometimes physical abuse on the street as a direct result of wearing it.  It also definitively concluded that women had freely chosen to wear it, often in opposition to family and friends.

Kenza Drider described her experiences: “I still go out in my car, on foot, to the shops, to collect my kids. I’m insulted about three to four times a day,” she says. Most say, “Go home”; some say, “We’ll kill you.” One said: “We’ll do to you what we did to the Jews.” In the worst attack, before the law came in, a man tried to run her down in his car.

Not only is freedom to practice religion enshrined in Article 18 of the Universal Declaration of Human Rights, but any violation of those rights is a clear Islamic indication for action, whether that be political participation or making hijrah.

The speed at which bans are spreading across Europe, suggests that unless this tide of discrimination is nipped in the bud, through education and demonstrations, there is a real risk that matters could get out of control.  It is up to the wider Muslim community to unite and organize from now so that we have the ground covered for successive crises.

What started with niqab, may develop into hijab, before eroding the fundamental principles of Islam.  Hijab bans in schools and universities are already in place in Tunisia and Turkey. Quite frankly, it is embarrassing how we have limited Muslim women from making their own choices even in our own backyard.

Luckily Sarkozy’s anti-niqab legislation, failed to improve his popularity ratings.  What remains to be seen is whether his little trick will be one of the most successful means to unite what has hitherto been a somewhat divided ummah.