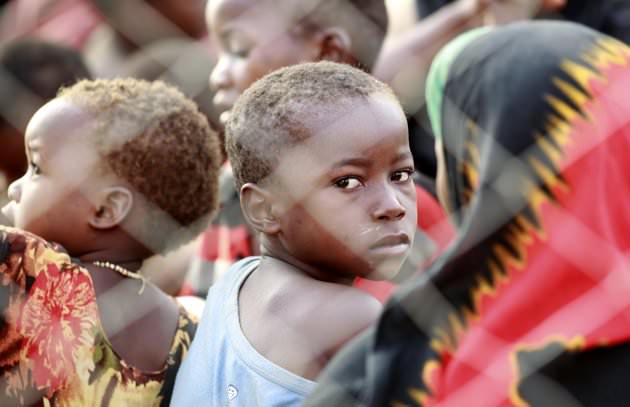 Furqan Naeem recently completed his summer internship with Human Appeal International.  He got the opportunity to travel to Somalia to witness the devastation first-hand and to implement some projects to benefit the people of the famine.  The following is a personal account of his experiences whilst out in Somalia.

Last week I returned from a humanitarian trip with Human Appeal International from the famine stricken area of Mogadishu in Somalia. It was certainly an experience I’ll never forget. It was a week of witnessing things from a different perspective, a week reflecting on how fortunate we are to have those simple things we take for granted and it was a week of learning to always give more than you receive.

My first impression of Somalia was one of a broken world, one of no order where chaos prevails above all other things.  I spent a day in Nairobi the day before visiting orphanages.  I thought I’d use my time in Nairobi to gain an understanding of what life in East Africa was actually like.  I thought this would equip me to cope with the devastation that I was to experience in Somalia.

Arriving in Mogadishu, the next day, felt like I had entered a different world.  It was surreal.  The airport seemed like a shelter home and the tight security all round made me feel very nervous.  Even as we were at the entry office one of the questions on the visa form was “what weapons have you brought with you?”. Reading that question made me realise that this was a place not for the faint hearted.  As we headed to our secure residence for the week, I saw that there wasn’t a single built-structure that was not crumbling.  It felt like we were in a warzone and this was before we went to visit any of the famine victims.

The next few days were spent visiting refugee camps and a local hospital so we could identify the areas on the ground where aid was still not reaching. Visiting the refugee camps and hospital was the point in the trip where you actually got to see first-hand how the famine had devastated so many families.  As we went visiting from tent to tent with our local team there, we were able to communicate with some of the families.  Real families, real people who all had a common story.  They had all walked for weeks to get to the refugee camp in the hope that aid would be there but found nothing but more desperate people and families.

I heard how incredibly difficult life could be for these people.  I remember meeting a young mother who only 3 weeks back gave birth to a young baby boy but she was barely able to look after herself because of her weakness and the young baby was in a critical state.  It could easily be the case that these two human beings are no more, but this was the case all across refugee camps in Mogadishu, just to give a glimpse of the scale of disaster.

After visiting three refugee camps around Mogadishu and witnessing first hand what it was like for the poor and needy we had a chance to visit one of the local hospitals to see what sort of assistance doctors were trying to provide.  Unfortunately the scenes were not much different at the hospital.  As soon as we arrived we immediately saw a young boy getting treated outside the hospital for lack of clean water as there was insufficient space inside.  There were so many victims all in distress with their families but the sad thing was to see so few doctors on hand who were being stretched in the first place. Most of the hospital was filled with young babies suffering from waterborne diseases, which have little or no cure.

After identifying the areas where aid was not being reached, we set about initiating food distribution points, mobile medical clinics and water distribution to the camps. This was perhaps the most satisfying part of the trip – to help all those that you saw on the ground providing them with food packages that would help their families for a month at a time.

But the sad reality was that we were only just scratching the surface in terms of the amount of people that were suffering and still needed help.  I witnessed the bittersweet reactions in the faces of the families who at first were relieved to see aid coming in the form of food and water but then realising that this might be the only help they’ll receive in months. Even with the mobile medical clinic I saw how families valued getting the right treatment and medicine to help with all the illnesses. They queued for miles just to see a doctor in the hope that their illness might be cured.

In a country where there is so much despair and misery we managed to visit the University of Mogadishu, which surely is a beacon of hope in times of uncertainty for the Somalian people.  There are two sides to Somalia and the reason why it is in so much ruin.  One side is the recent famine, which has affected much of Somalia but the other side is the total lack of infrastructure and leadership from those in control of the country.  The two have combined in a devastating way and now a time of misery has fallen upon the people of smiles. But for the country to prosper in years to come and for the people to live a better a life,  Somalia has to produce effective citizenry; and education is the key in building the country’s next generation of leaders.  The university has a massive role to play in the shaping of the country by producing well-grounded students who will go on to help provide that infrastructure and help build a country where peace can be achieved sooner rather than later.

Whilst out on the trip with Human Appeal International I managed to spend some time with Dr. Hani El Banna, the founder of Islamic Relief, who was busy organising a conference bringing together Muslim charities and local NGOs to help improve the situation in Somalia through his role as chairman of Muslim Charities Forum.  Dr. Hani has always been an inspiration to me and so getting the opportunity to work with him was a real honour, not to mention a huge learning curve.  The best part was seeing him in his element when he is with the children.  I remember when we finished Friday prayers and he started to make animal noises to communicate with the children.  They smiled and replied back with the same animal noises.  In a matter of seconds there were hundreds of young children around this great man as he built that special connection with the forgotten children of Somalia.

All in all it was truly an experience of a lifetime.  Having reflected for a week since I’ve been back, the memories of the faces of desperation I saw still live within me.  One thing I have learnt is to be grateful for what I have in life and to never complain if something doesn’t quite go my way.  There are people living in so much more difficulty than me – how do I have a right to complain?  I will never forget the stories; the mother who lost her children walking to the refugee camps, the father who had to sacrifice some of his children in order to provide for a few.  And what about the rain prayer where I was blessed to be part of a gathering where over 10,000 people came together to pray for rain and the next morning through God’s mercy rain descended upon the people of Mogadishu.  These memories shall stay with me for as long as I shall live and will continue to inspire me for years to come.  As I reflect back I still see the desperate faces and I wonder about their plight and the constant hardship they experience.  I do have hope though.  Yes the task is enormous, yes we still have a lot of work to do here in the UK, but I firmly believe that if we all play our part, make enough effort through our donations and prayers, then prosperity and peace will eventually come to the people of Somalia.