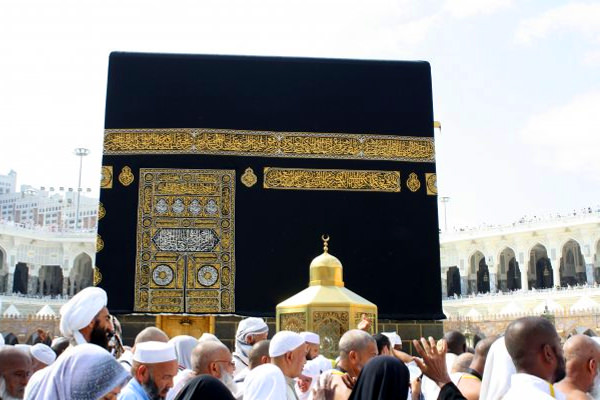 At the Maqam e Ibrāhīm:

I held on to the golden bars trying to keep my balance, with my nose pressed against the blurry glass screen smeared with many a finger mark. I bolstered up my wits and finally decided to look: footprints in the sands of time, etched into the sacred earth forever by Divine Decree- blessed, immortalized. Ibrāhīm (‘alayhi’l-salām) had stood up and stood out. His standing was an act of worship and intense adoration, an act of courage, resistance, strength, integrity, dignity and true heroism. He laid the foundations of this modest little structure that stands in the heart of Makkah like an immense magnet drawing to itself millions who strive to stand in its shade. In its humble construction, shorn of all grandeur and ostentation, it inspires an inexplicable awe and reverence; giving direction and focus, unifying, holding together, reminding. Ibrāhīm’s was a labor of love. The builders had prayed, “Our Lord! Accept this from us! Indeed You are the Hearing, the Knowing. Our Lord! Make us Muslims [in submission] to You and from our descendants a Muslim nation [in submission] to You.” (2:128)

Ibrāhīm (‘alayhi’l-salām) had questioned, wondered, reflected. He had thirsted for the Truth and sought the Light that rends all shrouding darkness. He had refused ordinariness, refused to follow the crowd- stood up and stood out, facing the winds alone. He had Loved-truly, settling for nothing lesser than the perfection, wholeness, sublimity of Al-Ḥaqq (The Truth). In the darkness of the night he beheld the shining star, and in his very human search for the Object of the deepest Love the human heart is capable of, he said, “‘This is my Lord.’ But when it set, he said, ‘I do not love those who fade away.’”(6:77) He had loved passionately through hardship, suffering and trial, and attained the Pleasure of Allāh, so that the place of his standing- this stone I beheld through the blurry screen- became sacred, hallowed ground; the endeavor of his hands and limbs became a ritual of worship observed by billions here forevermore.

Ibrāhīm (‘alayhi’l-salām) had stood alone to confront and expose falsehood that his innate fiṭrah had rejected, all the while ‘seeking the Face of His Lord.’ He was sensitive and honest to the Divine Essence breathed into the heart of man, which testifies to Monotheism. Today, as I look around at this immense unending crowd vying to stand where he stood, seeking to be honored by walking the path he walked, I am educated in the meaning of leadership.

While on the theme of leadership, there cannot be a legacy more venerable, more awe-inspiring, powerful and enduring. Some wise old man said something to the effect that when you stand up for the truth against the odds, the whole universe conspires in your favor, because that truth you strive to establish is written in the heart of the earth; it is destiny.

The man whose footprint I beheld is acknowledged as the spiritual progenitor in all monotheistic traditions. Islam claims a direct link with Ibrāhīm (‘alayhi’l-salām) not through race or geography but primarily on account of theology, as its simple Monotheism  of ‘La ilaha ilallah’ (no god but Allāh) is the ‘Way of your father Abraham’ (22:78). 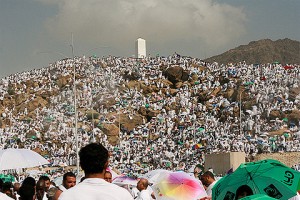 Catching a Glimpse of Jabal Nūr in the distance…

Years passed and the heart and mind of man was clouded again by ignorance while Ibrāhīm (‘alayhi’l-salām)’s legacy existed only as dusty remnants and soulless rituals. From the shadows of jāhiliyyah (Ignorance) emerged again a soul restive in search of the Whole Truth, refusing these untruths and half truths, attentive to the inner voice that had impelled Ibrāhīm’s struggle. It was convinced that the Truth lay waiting to be discovered. Not far from the Ka’bah stands Jabal Nūr, the Mountain of Light… Muḥammad (ṣallallāhu ‘alayhi wa sallam) ascended its steep, stony incline to isolate himself from a society that had lost its discrimination of right and wrong, in order to contemplate the truth, seek out answers and pray to the One God of Ibrāhīm (‘alayhi’l-salām). Muḥammad (ṣallallāhu ‘alayhi wa sallam), the devoted follower of Ibrāhīm’s (‘alayhi’l-salām) honest creed was chosen to lead, and Jabal Nūr irradiated the world with God’s final revelation.

From Makkah to Madīnah

I am on the way from Makkah- the native city of Muḥammad (ṣallallāhu ‘alayhi wa sallam)- to Madīnah where he had sought refuge. While reclining on the cushioned seat of an air-conditioned bus, I gaze outside to see rugged mountains and a forbidding, hostile landscape- barren and treeless, with the desert sun mercilessly streaming down red hot. Roughly 1431 years ago, Muhammad (ṣallallāhu ‘alayhi wa sallam) and his followers had made the same journey in conditions as different from my journey today as possible- on foot, with and sometimes without bare essentials of life; ragged, penniless, shelter-less, fearing for their lives yet led on by one conviction- their hope and trust in the Lord of the Heavens and the Earth, the Owner of Destiny.

In his work ‘Khutbaat Haram’, Abul ‘Ala Maududi records when the Prophet (ṣallallāhu ‘alayhi wa sallam) sat against the wall of the Ka’bah in the early days of Islam when his few followers were being oppressed and tortured in vile ways. Khabab bin Al Aratt (raḍyAllāhu ‘anhu), who had suffered severe persecution for his faith, approached the Prophet (ṣallallāhu ‘alayhi wa sallam) in pain and desperation, asking him to beg Allāh for relief. The Prophet (ṣallallāhu ‘alayhi wa sallam) replied, “This task will be fulfilled, O Khubaib, till a time comes when the traveler shall go from Sana’a to Hadrmout without fear or worry (meaning, peace will be established in the land through Islam). But it is you who turn impatient.” This hope in the darkest of times sprang from faith and trust in Allah, and mankind witnessed its fulfilment.

Standing up to pray in the shade of the green dome of the Prophet’s (ṣallallāhu ‘alayhi wa sallam) mosque in Madīnah, I was reminded of that early surah revealed to the Prophet  at one of the lowest points in his life when he had been rejected and ridiculed:  “By the forenoon (after sun-rise); And by the night when it is still (or darkens); Your Lord (O Muḥammad (ṣallallāhu ‘alayhi wa sallam) has neither forsaken you nor hated you. And indeed the Hereafter is better for you than the present (life of this world). And verily, your Lord will give you (all i.e. good) so that you shall be well-pleased. Did He not find you (O Muḥammad (ṣallallāhu ‘alayhi wa sallam) an orphan and gave you a refuge? And He found you unaware and guided you? And He found you poor, and made you rich (self sufficient with self contentment, etc.)? Therefore, treat not the orphan with oppression, And repulse not the beggar; And proclaim the Grace of your Lord (i.e. the Prophethood and all other Graces).” (Chapter 93) 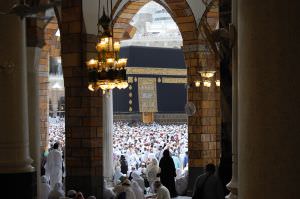 This day I stand, a speck among these millions all moving on as wavelets of a shore-less ocean around the Center, their whispered prayers merging into a chorus: “Glory be to You! All Praise and Thanks are to You! There is no god except Allāh; Allāh is great! There is no power or might except with Allāh.” They all move forward yet are bound to the core, all seeking One Goal, One Direction. The ocean never recedes, never dwindles; from the far corners of the earth they come to witness this extraordinary legacy, to live this miracle, to stand where Ibrāhīm had stood, walk where Muḥammad (ṣallallāhu ‘alayhi wa sallam) had walked-and be inheritors and sharers in the great legacy preserved, revived, immortalized by the Lord of the Ka’bah: “Hence, [O Muḥammad,] proclaim thou unto all people the pilgrimage: they will come unto thee on foot and on every [kind of] fast mount, coming from every far-away point [on earth]…” (22:27)

As I merge into the endless moving circle, I am enveloped by a sense of peace that reaches the innermost recesses of my being. For an instant all pain and fear drowns into the power and magic of the moment, and a swoon of blissful oblivion envelops me-all is here and now. I rise, I float, I fly-like those midget-birds that forever circle the azure skies around the Ka’bah, daylong, nightlong- a labor of Love.

There are also moments of intense self-awareness when you are struck by the realization of how unworthy you are of the honor to be here, how undeserving to set foot on this sacred earth. Witnessing the manifestations of His Glory, you become conscious of the darkness in your heart and soul, you feel a crushing shame that suffocates you… but like the winds bearing good news of the torrent, Hope in His Mercy comes to liberate. For, the Mercy of the One who brought you here is greater, so all encompassing. The feeling is reassuring as you rise above regret and shame onto the wings of hope and bask in the comfort of the knowledge that His mercy and forgiveness supersedes His wrath. “If it were not for Allāh’s grace and mercy on you and that Allāh is Oft-Returning Full of Wisdom (ye would be ruined indeed).”(24:10)

I look at this gigantic mass of people of all shades and colors, these followers all sweat drenched, tear stained, barefoot, and I know this is the ‘Clear Victory.’(48:1) I know this is the ‘Fount of Abundance’: “To you (O Muḥammad!) have We granted the Fount of Abundance. So pray to your Lord, and sacrifice. Surely, he who bears rancor against you shall be severed (from all future hope).” (Chapter 108)

“Have We not opened your breast for you (O Muḥammad ṣallallāhu ‘alayhi wa sallam)? And removed from you your burden which weighed down your back? And raised high your fame? So verily, with the hardship, there is relief. Verily, with the hardship, there is relief. So when you have finished (from your occupation), then stand up for Allah’s worship (i.e. stand up for prayer). And to your Lord (Alone) turn (all your intentions and hopes and) your invocations.” (Chapter 94)

I walk away from the Ka’bah turning to look back at the silent, circling sea I have been a droplet of, moving gently, eternally in the shade of this small landmark that wears an unexplainable, immeasurable awe, majesty and power. It still draws to itself to elevate, honor and bless. I am overwhelmed with thanksgiving and with an already rising nostalgia I will have to live with: “The lovers of Your faith shall never dwindle, even while I- fleeting creature of an hour receding into the dust, am no more among those forever treading the Path of Love.”

Yaser Birjas | Khutbah- Didn’t make it to Hajj this year?