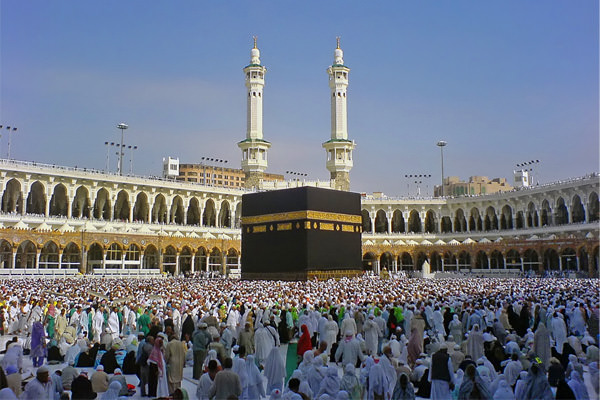 Mistake #1: Thinking that their iḥrām is the ‘cap’ they wear over their head

Some Muslimahs do not know what iḥrām means and they think it’s the cap that they put on over their hair, They don’t take it off no matter what, thinking they will “break their iḥrām”. Iḥrām is a state that you enter into and putting on any item of clothing when you enter into the state of iḥrām does not mean that you cannot take it off later. And taking it off does NOT mean that you ended your iḥrām. That’s why the ‘ulemā’ say we can change our iḥrām (meaning our clothes), and even wash it if it gets dirty. 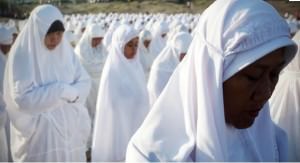 Some women have an excessive fear of breaking their hair. So much so that they don’t take off their scarf/dupatta/hijāb, even when they’re by themselves or among just women. They are so worried about their hair breaking, that they don’t even take off their headpiece for making wuḍū’. This is a trick of the Shaytān. Think about it. If you don’t do wuḍū’ properly, would your prayer be valid? Would your tawāf be valid? Do you really think Allāh would hold you accountable if you did something that was not in your control? No of course not. He is The Most Merciful. He is the Most Forgiving. Then, why would He would nullify your iḥrām just because a few hair fell out on their own, something that was out of your control! The prohibition is for the hair to be cut, plucked, shaved, etc. on purpose. Not involuntarily.

Mistake #3: Getting their hair cut ONLY by someone who has exited iḥrām

Many women think that ONLY the one who isNOT in iḥrām can cut their hair, once they’ve finished with their rituals. And they refuse to cut their own hair to exit  iḥrām nor do they allow another sister who has not yet exited iḥrām to cut  it for them, thinking that she is not allowed to do that for them. This is a wrong notion. Actually, if you think about it, you are supposed to cut your hair when you finish with all the rituals.

The Prophet (ṣallallāhu ‘alayhi wa sallam) commanded his companions, during the Farewell Pilgrimage:

“Let him cut his (meaning, his own) hair then exit iḥrām.” (al-Bukhāri, Muslim)

Mistake #4: Not going to the Jamarāt or Muzdalifah 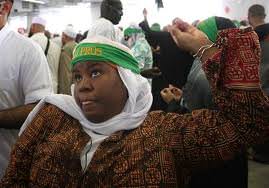 Some of us delegate another hajji to throw the pebbles on our behalf for no valid reason. We get scared of the crowd or sometimes, get plain old lazy, not understanding the importance of doing it themselves, even if they are able.

Māshā’Allāh, Allāh has blessed us with health. Alḥamdulillāh, we are young, energetic, confident, and capable. We are able to do anything and everything when we are back home and yet, when it comes to Hajj and the Jamarāt, all of a sudden we become “frail, little weaklings who cannot go throw the pebbles”.

Don’t be lazy about the rituals of Hajj. Realize the significance of doing everything yourself if you have the ability. There’s no need to be scared at all. Yes, many years ago, we heard horror stories of stampedes, and people suffocating or hurting themselves. But not anymore, Alḥamdulillāh the Saudi government has renovated the whole Jamarāt complex a few years ago and it is the easiest thing in the world. I have seen old people in wheelchairs, people on crutches, and kids as little as 3 and 4 years old, throwing the pebbles themselves.

If there is a lot of crowd or your safety is an issue, it can be delayed.

“It is permissible to delay their (meaning women) stoning of the  Jamarāt until the crowding is less or has stopped, and there is nothing wrong with them doing that.” (Fatawa Shaykh Uthaymeen)

Although it is allowed for women to leave Muzdhalifah after half the night has passed, if there is an excuse such as sickness, weakness, or just because we are women. BUT, it is better if you do stay the whole night following the Sunnah of the Prophet (ṣallallāhu ‘alayhi wa sallam). So don’t chicken out.

Mistake #5: Crowding with the men 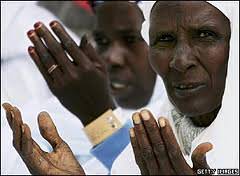 Beware of crowding with men in all the rituals of Hajj, especially during ṭawāf and at the Black Stone, during Sa’i and when stoning the Jamarat. Choose times when there is less crowding. Think about it. Touching the Black Stone is a beautiful Sunnah, but it is a sunnah. And protecting yourself and your hayā’ from coming in unnecessary contact with all non-mahram men is a FARDH.

The Mother of Believers, ‘Ā’ishah used to do ṭawāf in an area away from the men, and she did not touch the Black Stone or the Yemeni Corner if there was crowding.

It was narrated that ‘Ata’ said:

‘Ā’ishah used to do ṭawāf far away from the men, not mixing with them.” A woman said: “O Mother of the Believers, let us go and touch the Black Stone!” She said: “Go yourself,” and she refused to go.

In my opinion, the best place for us women to do ṭawāf is up on the roof of the Masjid. Now it may seem like a big distance from far, but I promise you, all it takes is an hour and 10 minutes, to be precise, to complete a ṭawāf, walking at an average pace.

Now the Shayṭān may play with your mind and make it seem like a lot. But then ask yourself this…don’t you easily, easily, walk an hour ten minutes in the mall?

Mistake # 6: Rushing through ‘ibādah. Remember it’s about quality, NOT quantity 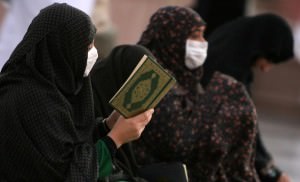 Remember that Allāh will look at the quality of your worship, NOT your quantity. And that’s why our deeds will be weighed on the Day of Judgment and not counted. If you pray just two rakʿah with khushū‘, concentrating on what you are saying, beseeching Allāh with humility, wouldn’t that be better and more acceptable to Allāh than even 50 or even a 100 rakʿah quickly pecking the ground, without knowing a word of what you are saying?

Every time you do any ‘ibādah, check to see whether you have khushoo or not? Are you focused in what you are doing? Do you know the meaning of what you are saying or asking? Are you moving at a slow, measured pace or are you rushing through it?

“The worst type of thief is the one who steals from his prayer!” The Companions asked, “Oh Messenger of Allah! How does one steal from his prayers?” The Prophet (ṣallallāhu ‘alayhi wa sallam), responded,

“He does not complete his bowing, nor his prostrations.” Or he said “He does not straighten his backbone while bowing and prostrating.” (Ahmed, Al-Ṭabarani, others–authentic)

Mistake #7: Misbehaving in the Masjid of the Prophet 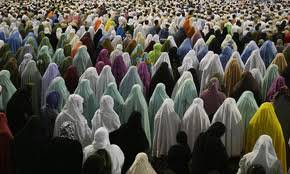 One of the worst mistakes that I see the sisters making is at the Prophet’s (ṣallallāhu ‘alayhi wa sallam) Masjid. When the doors are opened, in the morning and evening, for the sisters so that they can visit the Raudah of the Prophet (ṣallallāhu ‘alayhi wa sallam), they totally lose all sense of who they are, where they are and what they are doing. They run like wild animals let loose, shouting and screaming in ignorance, pushing each other, trampling anyone and everyone that comes in their way.

Remember when visiting the Prophet (ṣallallāhu ‘alayhi wa sallam),’s Masjid, to behave with honor and dignity, with the hayaa‘ that Allāh has adorned you with, as a believing Muslim woman would. Remember to keep your voice soft and your walk paced. Don’t shove, push, harm or hurt your fellow Muslim sisters. Even if you didn’t get a chance to pray in that area, if you let your sister pray there for the sake of Allāh just because she is your Muslim sister, Allāh will reward you, and He knows best, perhaps even more than He would have, had you yourself had a chance to pray there.

I see so many sisters wasting their time talking with each other, about nothing specific, mingling and socializing with the other Hajjis, while they are staying in 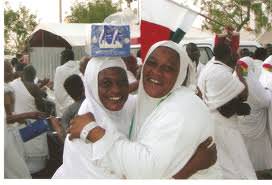 Mina and even on the day of Arafah, which is the most important day of Hajj. They forget that these are the most blessed days in which ibādah is dearest to Allāh. They forget that Mina is not a place to socialize; rather it is a place for ibādah and dhikr and istighfār and du‘ā’. They forget that Day of Arafah is THE DAY for Hajj. That’s what this whole journey is all about. Instead of remembering Allāh, they busy themselves with idle talk, laughing, joking, even gheebah and gossip.

Now, there’s nothing wrong with talking for a little bit and to enquire about each other’s well being, etc. In fact, it becomes an act ibādahof  if you talk with that niyyah of being kind and polite to your fellow Muslim or for taking a little rest in between your ibādah to refresh yourself. But when this talking takes over one’s time and this is what a person is doing the majority of the time in Mina, then it becomes an a serious issue of wasting precious time. And in the end, no one loses but you.

Mistake # 9: Being uncovered in Muzdalifah

Muzdalifah is an open ground and there are no tents, etc and the bathrooms are in an open field. When the sisters make wuḍū’ there, they forget that they are in an open area and there are men everywhere who can see them. Yet, they take off their ḥijābs and dupattas right in front of them to make wuḍū’, thus exposing themselves. So how does one make wuḍū’ in such a situation?

There is an easy solution to all of this. Whenever you need to make wuḍū’, go with a few women as a group and take turns making wuḍū’ while the others can hold up a piece of cloth, ḥijāb, etc in such a way as to cover you and hide you completely. This way no one can see you, insha Allāh.

May Allāh enable us to perform Hajj according to the Sunnah of the Prophet (ṣallallāhu ‘alayhi wa sallam), in a manner that is most pleasing to Him. May Allāh accept this Hajj from all of us and make it Mabroor. Ameen.

Creative Nonfiction | In the Playground