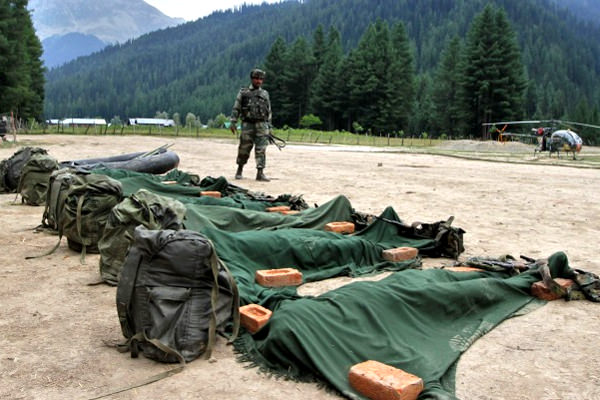 For years, people whispered about the thousands of disappeared young men in Kashmir. But only now are the bones finally speaking.

By Basharat Peer from ForeignPolicy.com

SRINAGAR, Kashmir — On a pleasant September morning, Mohammad Sidiq, a sand-digger in his early 30s, pushes his long wooden boat out onto the River Jhelum, which cuts through the heart of Srinagar, the biggest city in the disputed, Indian-controlled province of Kashmir. As the sun rises over the blue-gray pines and bleached snows of the Himalayas circling the city, Sidiq paddles out with his partner, using long-handled shovels and corkscrews to draw sand from the riverbed. It’s slow, hard work, but a day’s labor nets a boat full of sand, which sells for $50. While describing the modest economy of his work, Sidiq speaks of his relationship to the Jhelum, a wide green river that flows quietly through the Kashmir Valley, across the disputed, mountainous border, known as the Line of Control, and into Pakistan-controlled Kashmir. “No man can bear what this river has witnessed,” he says, staring across water.

Sidiq has been working on the river for 12 years now. Every week or two, as he hoists a shovel full of sand from the riverbed, he finds himself staring at a skull, a broken skeleton, or a shattered femur. “Most of the dead were young men. You could see their shiny teeth; you could tell from the skull, he was very, very young. One day I found a young man…. He had been badly tortured. Both his hands and feet had been chopped off,” says Sidiq as he sits beneath the majestic maple trees lining the riverbank.

A fellow sand-digger in his early 40s, Naseer Ahmed, found a skull in March. “It was a small skull. It would have been a 16- or 17-year-old boy. The other day, it was a thigh with flesh still on it,” Ahmed said. “It is a haunted river.”

The grim story starts more than two decades ago, in 1989, when a separatist insurgency blossomed in Kashmir. India had gradually eroded any sense of Muslim-majority Kashmir’s autonomy, rigging elections and arresting and torturing opposition political activists. Gun battles between the separatist guerrillas and the Indian troops were routine; land mines and hand grenades exploded every other day in crowded markets, on empty roads. Fear dominated the streets and nobody stepped out after dusk. By 1996, according to conservative official estimates, around 15,000 had been killed — a number that has since risen to 70,000. India’s military, paramilitary, and police forces deployed in massive numbers to pacify the rebellious province, and tens of thousands of Kashmiri civilians were taken into custody. Thousands never returned. Human Rights Watch, Amnesty International, and several Indian rights groups have repeatedly urged the Indian government to investigate the disappearances in Kashmir, but the government and the Army consistently argued that the missing weren’t dead: They had crossed over to Pakistan to train as militants.

Stories of arrests, torture, killings, and secret burials were rife in Kashmir throughout the 1990s. Akhter Mohiuddin, a much-respected Kashmiri short-story writer, dedicated a collection of stories to “young men who were murdered at unknown places,” and celebrated Kashmiri-American poet Agha Shahid Ali, who taught at New York University and the University of Massachusetts, Amherst, wrote in his 1997 collection, The Country Without a Post Office, “And the night’s sun there in Srinagar? Guns shoot stars into the sky, the storm of constellations night after night, the infinite that rages on…. Srinagar was under curfew. The identity pass may or may not have helped in the crackdown. Son after son — never to return from the night of torture — was taken away.”

The Association of Parents of Disappeared Persons, a Srinagar-based advocacy group, is led by 55-year-old former homemaker Parveena Ahanger, whose 17-year-old, speech-impaired son, Javed Ahanger, disappeared in January 1990 after a raid by the Indian Army. The NGO puts the number of enforced disappearances in Kashmir’s long, brutal war at around 8,000 men and boys. They are largely believed to have been killed, their bodies weighted and dumped into the river or buried in unknown, unmarked mass graves. “My son was taken from my home by the military. The government is responsible for him. I don’t know where they kept him, whether he is still alive. I want to know where he is,” Ahanger told me.

In December 2009, the common knowledge that thousands were killed and buried in unknown places turned out to be true. The International People’s Tribunal on Human Rights and Justice in Indian-Administered Kashmir (IPTK), a group of human rights activists led by a local rights group, published a report called “Buried Evidence” that established and conclusively documented the presence of 2,700 unmarked graves of unidentified people in three northern districts of the Kashmir Valley, close to the Line of Control. By 2009, the insurgency was almost over, and access to the heavily militarized border districts became relatively easier. Activists from the group had spent a few weeks in the border areas helping victims of the late-2005 Kashmir earthquake. “It was then that villagers began telling us about the unmarked and mass graves,” says Khurram Parvez, an activist with Jammu and Kashmir Coalition of Civil Society, the main group within IPTK.

Parvez and his colleagues sought more information, eventually visiting 55 villages in northwestern Kashmir’s Baramulla, Kupwara, and Handwara districts, documenting the unmarked graves. “In the 2,700 graves we investigated, the body count was 2,943+. Within the 2,700 graves, 154 graves contained two bodies each and 23 graves contained more than two cadavers. Within these 23 graves, the number of bodies ranged from 3 to 17,” their report read. Most of the bodies had been delivered to local police by the military. The police would register their deaths as foreign terrorists, take pictures of the bodies — and then, late at night, go to the villagers demanding that they be buried, quickly and quietly. Most bodies were bullet-riddled; many bore the marks of torture.

In late 2009, I traveled from Srinagar to Chehal Bimyar village near the Line of Control, one of the biggest sites of the unmarked graves. In a tiny mud-and-brick house, I met Atta Mohammad, a 68-year-old farmer who had buried 203 bodies that the police brought to his village, mostly at night. “I did it out of religious obligation. The dead have to be treated respectfully,” said Mohammed, a shriveled, small man. Despite being haunted by the defaced bodies and the graves in his dreams, Mohammad continued with the burials. A personal tragedy moved him to the task. His nephew, an orphan whom he had raised, had disappeared in the mid-1990s without a trace. A few hundred yards from his house, the graveyard spread out on the slope of a hill beside a school — rows and row of mounds of dark gray soil.

Arundhati Roy- The dead begin to speak up in India

Glenn Greenwald |The FBI again thwarts its own Terror plot