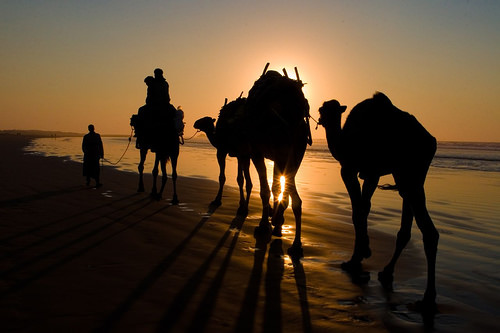 This lecture is brought to you by the Memphis Islamic Center (MIC). For more information about MIC, please visit www.memphisislamiccenter.org

The name Āle-‘Imrān comes from the family of ‘Imrān.  This phrase occurs in the second page of Sūrah Āle-‘Imrān.  Allāh says, “Allāh has chosen Ādam, Nūḥ, the family of Ibrāhīm, and the family of ‘Imrān over all of the world.”  These four individuals have been chosen by Allāh.  Ādam is the father of all prophets.  Nūḥ is called the second Ādam because all of humanity after Nūḥ comes from Nūḥ.  Allāh destroyed everybody in the flood except for Nūḥ and his daughters and sons-in-law and from them, man regenerated.  Ibrāhīm was the father of all future prophets.  No prophet came except that he came from his progeny.  ‘Imrān is the maternal grandfather of ‘Īsa ibn Maryam.  Maryam is the daughter of ‘Imrān.  Allāh says the family of ‘Imrān, meaning Maryam and Jesus.  Allāh has chosen these four above humanity.  This shows us that the family of ‘Imrān is indeed a family that rivals the others who have been mentioned.

In today’s short khātirah, I want to shed a little bit of light on three lines that our shaykh recited in one rak‘ah, which are a beautiful summary of what it means to be a believer.  Allāh said in the Qur’ān, “Race with one another to forgiveness that your Lord has prepared and a Paradise whose width is equivalent to the heavens and the earth.  It has been prepared for those who are righteous.”  In this verse, Allāh tells us a number of things.  First and foremost, Jannah and Allāh’s maghfirah are waiting at the end as a prize.  They are already there; Jannah is not something that has to be created.  As we speak, there is Jannah, and it is there for the taking by whoever wins the race.

“All of you should race one another to get this Paradise whose width is equivalent to the distance between the heavens and the earth.”  Some scholars ask, “Why is Allāh describing Jannah by its width?”  When you generally describe something, you describe it by its length.  The scholars say that its length is beyond human comprehension, so Allāh tells its width as being the greatest distance that the average mind thinks of, which is between the heavens and the earth.  When Allāh says that its width is as long as you can imagine, then its length will be longer than you can imagine.

In Ṣaḥīḥ Muslim, the Prophet (ṣallallāhu ‘alayhi wa sallam) said, “The lowest person in Jannah will be told by Allah to wish, so he will wish.  Allāh will tell him to wish again, and he will wish.  Allāh will keep asking him to wish until he runs out of wishes.  Then Allāh says, ‘I will give you all of this and ten times what you have wished.’”  Imagine if a person says he wants everything in this world and keeps on wishing – this is the lowest person in Jannah.  What do you think will be the case of people higher than him?

“And they control their anger.”  One of the characteristics of the muttaqīn is that they control their anger, which means that something causes you to be legitimately angry but your controlling is where piety comes in.  Many of the scholars of the past, when explaining this verse, said the number of characteristic of controlling the anger is to control it in your household (i.e. to your wife, children, and servants) because these are the ones where nobody outside is monitoring you, and your anger can reach its limit and nobody knows.  You have the power to get the anger out on your wife or children.  If you can control your anger inside of the household, then you can control it outside of the household.

Of the characteristics of the believers is that they control their anger and they forgive people.  This is forgiveness based upon a legitimate fault.  We are not talking about inventing faults, but somebody has done wrong, and then you forgive them.

“And Allāh loves those who go beyond this.”  One of the very famous scholars of the past, Ahmed ibn Al-Qays, had a slave and was sitting in an audience of many people.  The slave came with hot coffee or tea and tripped and it fell on him.  He became so angry and people could see the anger come.  The slaves of those times were very intelligent people, and he said, “My dear master, haven’t you read what Allāh says in the Qur’ān that of the characteristics of the muttaqīn is that they control their anger?”  He said, “You are right, I will control my anger.”  The slave went on, “And they forgive.”  He said, “I have forgiven you.”  The slave said, “Allāh loves the muḥsinīn.”  Al-Ahnaf said, “You won, you have been set free for the sake of Allāh (subḥānahu wa ta‘āla).”

This shows that this is exactly what the verse is talking about.  You keep on striving for excellence.  “The muttaqīn who will be given Jannah are those who when they commit a very evil mistake…”  Ibn ʿAbbās said this is zina.  Notice that Allāh says the muttaqīn might do a fāḥishah.

“…or they do some wrong.”  Other scholars said fāḥishah means a major sin and ẓalamu anfusahum means a minor sin.  What is the result of whatever sin they do?   Dhakarullāh.  They remember Allāh.  This is a beautiful verse.  To become a muttaqi does not mean that you become sinless.  The angels are sinless.  To be a muttaqi means that when you commit a mistake, you remember.

Iṣrār means that you make a genuine attempt to avoid.  This is an intention.  If you fall into the sin but had sincerely intended not to do it, then it does not disqualify this verse.  The point is that they don’t intend to go back to it but intend to become better.  It is a sincere intention, but then you trip, but then you intend again and trip and intend again and trip.  One of the scholars of the past said that even if you committed the sin 70 times a day but every time were sincere to give it up, then the verse still applies to you.  What is required of you is the intention, and Allāh knows your intention.  Nobody is going to reach perfection, and nobody is going to become a walking angel.  What is desired is that you keep on striving.

“And they know that Allāh forgives their sins and is their Lord and Master.  These are the people who will get the forgiveness from their Lord and they will get Jannah as a result of what they have done.”

The bottom line is that taqwa and īmān are not mere theoretical belief in Allāh (subḥānahu wa ta‘āla).  It is action-based and demonstrated in what you do and say and deal with your wife and children.  To summarize, the characteristics of the muttaqīn are those who give constantly regardless of the state that they are in – and Ramadan is the month of giving – and they control their anger and forgive people for the wrong that they have done and go beyond forgiveness and show good.  When they commit a sin or find a fault in themselves, they remember Allāh (subḥānahu wa ta‘āla) and ask Allāh for forgiveness, realizing that only Allāh forgives the sins, and they make a decision to never return to that sin again, and they know and are conscious of who Allāh is and who they are.  These are the true muttaqīn.