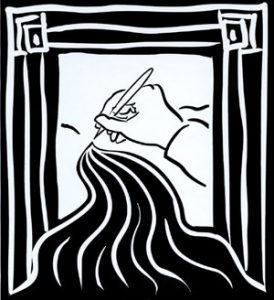 Welcome to MM Arts’ new feature-, Poetry Day! Ever since the poetry contest we held on MM this past Ramadan, we’ve been receiving poetry submissions from you very often. Now we’ve decided to dedicate a day, each month, to publishing your wonderful poems, Insha’Allah. :) If you want to share your verses with everyone here, kindly email us at poetry[@]muslimmatters[.]org stating your name, along with your poem. As soon as your poem is selected for publishing, we’ll let you know so that you can keep an eye out for it, Insha’Allah.

Without further ado, here are the three lovely poems we’ve selected for today…

No Turning Back?
by Sarah Vaid

Time stood still
pleasure endless
hours passed like minutes
smiles of satisfaction
not a second of realization
of the crime
of the treason
circumstance
the only reason for its end
and suddenly the passion
morphed into misery
regret endless
poison in the veins
no turning back
eyes full of tears
how did this happen?
a blank stare
a hopeless cry
fear of expulsion
inside the scum had built
day by day
the heart had turned
black as ash
no turning back
shame & silence
the definition of the life
now lived
no turning back
till one day
He came
the soul opened
the mind awakened
a new love implanted
Alas,
He never denies
the sincere
the truly lament
the ones that weep
humble,
honest,
day and night
He awaits
the return of the departed
of those gone astray
with greater love
than of their mothers
to give pardon
the past erased
not even a memory
to stand witness
An
Absolute
Rebirth

Once Upon A Timelessness
by Saad Muhammed Ismail

Once upon a time, in fact upon a timelessness…
Ask Stephen Hawking, he will bear witness.
There was nothing, nothing at all for a timeless eternity,
BANG! Then there came into existence everything we see.
Scientists say: Time, space, matter and energy were created back then,
When asked about the cause, they go: Who? What? When?
The sincere chaps among them,
Humbly acknowledge that they can’t explain.
But them adamant folks you’ll find many,
Mind closed, mouth open, toiling endlessly!
Concocting lies after lies in a philosophical disguise,
Unwilling to talk or compromise, yet apparently, blatantly out to baptize!
Why do they not realize?
That the evidences of creation can only be seen by the wise.
Those who value reality over vanity,
And instead of stumbling in the darkness of insanity,
Wake up and open their eyes!

Let me summarize,
What I want you to analyze.
Our universe is a life-permitting one,
The fine tuning and intricate details have been marvelously done…

For instance, consider the expansion rate of the universe,
The rate at which it’s elementary bodies disperse.
If it were altered, by 4-18 seconds even,
It would have shattered,
Re-collapsed upon itself right then!

Had it not been for the atomic weak force and the strength of gravity,
The universe would contain no life, nor humanity.
Even a change of one part in 10100 of it’s value,
Wouldn’t permit life in the universe, I tell you!

These are but a few balances of the many,
That hold our universe together so delicately.

Some might argue: this balance is just there,
And this is how things always were.
No, this isn’t due to physical necessity,
As it doesn’t depend on laws of nature, not even itty-bitty!
‘Cuz if that were the case,
(Much contrary to the reality we face,)
We’d have to admit,
That a universe without life couldn’t possibly exist!
However that could very well be a possibility,
And hence this premise fails in it’s probability.

Now if you think this could’ve come about by chance,
Think again, ‘cuz this isn’t the way our everyday lives advance.
Yes there’s a chance for everything, you skeptic!
But you argue just as an irrational fanatic!
‘Cuz the probability of it coming about in this manner,
Is so low, that it’s virtually impossible without a planner!

Ultimately, the only logical conclusion,
Is to believe in the design of creation
But how do we know that it was all caused by a personal being?
How can we say that of the unseen?
The cause could have been mechanical,
But we can’t say for sure, ‘cuz that would be radical!
However this we can say and shout,
And there is absolutely no doubt.
That there is something instead of nothing,
Listen to what I’m saying, I ain’t bluffing.
All the original conditions holding the vastness and diversity of life,
Are so delicate, as if on the edge of a knife!
To attribute this to chance and physical necessity,
To continue in this circle of frivolity,
That would be a mad man’s voice,
As this couldn’t have come about, but as a result of a choice.
So we see that life was chosen to be…
Choice implies will and will indicates personality!
That personality, that personal being,
Is none but God, knower of the unseen.

A question’s often posed after such a discussion:
Who created the creator of creation?
I could argue that that wouldn’t be God by definition,
But even if I gave it some relaxation,
This point I mustn’t forget to mention.
That such immature questions,
Defy science, it’s philosophy and foundations!
Which teach that “The best explanation doesn’t require an explanation.”

And even if we adopt the same attitude,
If we were to follow in this similitude,
That is to question, every attempt of explaining the explanation,
We would end up with an infinite regression!
And that would defeat the whole purpose of science in the first place,
Which seeks to provide an explanation for such concerns of the human race!

You and Me – Unity
by Brother Hafeez

So many differences, so much misunderstanding
Such and such said this
So and so said that
Hold up I say… It’s a trap!
Why not take a step back?
Let’s not ask what the difference is between you and me
More importantly
What are our similarities?
Don’t you agree?
What is our base 1? Don’t jump to 3
Ask yourself what is our core belief?
Ponder for a while…
And welcome a deep sigh of relief

It is the one thing that is supposed to unite us
So don’t go around trying to divide us
Think before you speak!
Don’t Diss, don’t cuss
Add an ingredient to build that trust
If THEY won’t, then YOU must!
Arrogance is a disease,
That will cause your heart to rust
And thus…

Say Salaam to the right, and Salaam to the left
As you stare from one person to the next
Know that he is your brother, under this banner
So don’t go repeating this statement in any old manner

This profound statement
Sent down by the Prophets
To overcome ignorance with knowledge
It brought certainty over doubt
Changing the world throughout
So don’t just accept it
Live it, breathe it, it’s time to submit
To this universal message that is a universal need
That is most central to our creed
That is the reality, for you and me
And it will always be, don’t you see?!

So be truthful and sincere,
To these words that we hold most dear
And always handle confrontations with the utmost care
Don’t slip down the slippery slope,
Of impatience and arrogance
Because you may just lose all hope!

It’s easy to judge at a single glance
So give that brother another chance
Before you judge him, Judge yourself I say
Reflect and remind yourself of the last day
When everything you do will be taken to account
And you will be hoping your good deeds will amount

The truth is…it’s not about you, him or me…
It’s about what we all truly believe
Take 1 step back to move 10 steps forward
To fulfil that craving for unity
It is the call of the Prophets
The essence of Tawheed
Hmm… any idea of what it can be?
Or how paramount it is to thee?
If not… then all I can say is it should be!
So wake up!
It’s time to face reality

As you prepare yourself for the hereafter
Hearing it before every Salaah…
Have you got it yet?
You guessed it; it’s the one and only Kalimah
La Ilaha Illallah
There is no deity worthy of worship, except Allah
And Muhammad is His final messenger
Putting traditions aside, learn from the past
As one, let’s create a better future
And hope and pray that these words are our last.