The clock strikes midnight and all around the sounds of fireworks and celebration fill the air.  I am in Alexandria, a port city in Egypt, visiting my aunt and cousins.  I have been in Egypt for 3 weeks.  Although there are plenty of New Year’s Eve fireworks in the states, I have personally never heard so many right outside my home.  My aunt watches the tv as channel after channel celebrates the coming of 2011, Egyptian style.

My kids have been a sleep for nearly 2 hours and I am yawning with fatigue.  By 12:20, I am in bed trying to sleep despite the constant blasts of the fireworks that keep waking me up.

Finally I fall into a deep sleep until I hear the beautiful sound of the athan coming from the masjid directly under the building I am staying in.  We wake up and pray and then fall back asleep.  We are supposed to leave Alexandria in the morning to drive back to Cairo for our final week of vacation before boarding the plane back to America.  A few hours later my mom wakes me up and tell me there is bad news. 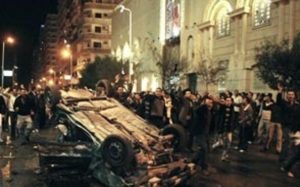 “Were their children killed?” I ask tearfully as I look at my two precious children eating their oatmeal.

We immediately turn on the tv and search for any news.  Details are sketchy and constantly changing.  The mayor of Alexandria makes a statement claiming that Al-Qaeda terrorists are responsible.

“WHY?  Why would they do this?  What is their point?  How can they justify this?” I ask as the tears increase in my eyes.

Al-Azhar, the oldest Islamic university in the world located in Cairo, issues a statement condemning the attack, saying the attack was against all Egyptians, not just a single religious group.

I immediately wonder what the U.S. news is reporting about the incident and whether they are relaying the condemnations flowing from the Arab and Islamic world about the incident.  One of the most asked questions I receive in America is “Why don’t the Muslims condemn the terrorism done in their name?”  My answer is always the same, “They do!  Over and Over and Over.  But the media does not report it, does not give us a mouthpiece.  Search the internet and you will see.”

As we keep watching more details come out.  They report that an empty car, apparently filled with bombs, was parked in front of the mosque across the street from the Church.  Eight of the twenty-one killed were actually Muslims, including a poor man selling prayer beads on the side of the road, a woman in hijab, and several Muslim guards stationed there to protect the church-goers.

“Why are they saying it is Al-Qaeda?  The car was parked between a mosque and a church on the mosque side of the street!”  My mom exclaims in surprise.

The news-people then begin a series of interviews with doctors operating on the injured and spectators outside of the church/mosque complex.

“I am a Muslim.  I love all fellow Egyptians and I view this attack against all Egyptians.  I want people to know that I am a Muslim and I condemn what has happened,” a young Egyptian man states in broken English in an attempt to give a clear statement for any English speaking networks.

I am so deeply saddened by the event.  I am saddened by the fact that innocent people were killed. I am shaken by the proximity of the church to my children and I.  I am confused by the conflicting news reports and wonder if we will ever really know the truth of who was behind the bomb and whether or not it was a tool in a religious battle or rather some sort of twisted political calculation.

In Cairo, my parents own a flat next door to a large church complex.  We must pass by the front gates of the church each time we walk out of the building.

All I can think is, “The next one could easily be me.”

Hebah is a Muslim American with a Masters Degree in Mechanical Engineering from UIUC. She was born in Chattanooga, Tennessee to Egyptian immigrants. She currently resides in Albuquerque, NM with her husband and two children. Hebah is a social activist who works to dispel the myths about Islam and Women in Islam through community presentations and panel discussions. She also heads Daughterz of Eve, a local Muslim girls youth group.