Oh Ikhlaas…The Islamic concept of sincerity we hear repeated like a broken record at each and every Islamic function. Whether it be a political endeavor, community service project, or religious class, the one topic that seems to keep recurring is that of sincerity. As one of my teachers so eloquently puts it: “What we find repeated the most is that which we need to be reminded of the most.”

This seemingly unattainable quality is one that I often found difficult to grasp in utter totality…that is until I watched Batman: the Dark Knight.

Two years ago, the release of the film Batman: The Dark Knight had Hollywood and Batman fans all over in a wild frenzy. Over the years, the character has evolved from a comic cartoon to a hope inspired savior that not only young boys admire, but to whom humanity can look to for their hopes and ideals.

But who is the Batman? What can we learn from this characterised vigilante? For those who have yet to see the film, let us examine the situations in which we find ourselves extracting Islamic ideals from his endeavors.

Bruce Wayne is his name by day while living among the common citizens of Gotham. In order to maintain a low profile and keep suspicions absent from even the wildest imaginations of his comrades and co-workers, he must outwardly display a certain mindset and lifestyle. Save a few trusted individuals, those around him know Bruce as the spoiled, rich, and nonchalant owner of Wayne Enterprises. 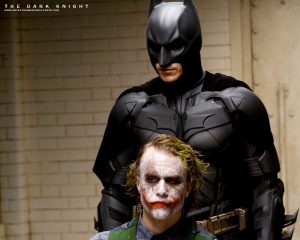 Fast forwarding to the end of the film, Batman and the Chief of Police find themselves in a predicament. Throughout the film, the city’s District Attorney had served as a ray of light in Gotham. He had  taken a last stand as the lone soldier against organized crime within the city. Sadly, the Joker was able to deliver him to the dark side,  and he soon embarked on a killing rampage, murdering even some of the closest people to him. To reveal this news to the people would mean the end of hope. It would mean that contrary to children’s book conclusions, evil would have conquered good, and all efforts to return hope into the hearts of the people would have vanished.

But this could not be so…

And so Batman agreed to take the blame. He agreed to make it known that he murdered the innocent, that he betrayed his community, that he indeed was not the hero everyone had known him to be…but that he was the Dark Knight.

These simple incidents blew my mind in a way that I had never before understood the ideal Islamic concept of sincerity like I did in these moments. If all Muslims had these ideals within us, we would all be a lot closer to the gates of Paradise.

Despite the fact that Batman toiled for the duration of the night securing society and serving as the main means of protection in the city, he lived in the eyes of the people as a common dimwit. He lived hearing snide comments and gossip regarding his lack of care and scarcity of intelligence. He lived and continued working despite what everyone said…Why?

Because it was the right thing to do.

Sincerity is the key to ultimate success. The Prophet (صلى الله عليه و سلم) taught us: “Whoever leaves this world with sincerity to Allah alone, performs the prayers, and pays the Zakah will die in the pleasure of Allah.” (Bukhari and Muslim) We find that sincerity is achieved when a Muslim performs an action purely for the sake of Allah without thought of personal interest or worldly esteem.

When Batman took the blame for another villain’s mischief and murder, it didn’t matter to him that the reputation of his alter-ego would be smeared. Originally, although his Bruce Wayne identity was one of which he was not fond, at least his praiseworthy Batman identity prevailed. Yet, he was even willing to give that up.

At the end of the day, it did not matter to him that he was praised or that his efforts were recognized. When it came down to it, what mattered was that the deed was done. In the above lessons, we find the exact definition of the Islamic concept of Ikhlaas. Because sincerity is to perform an action purely for the sake of Allah; not for reputation, nor for recognition, but because it is the right thing to do.

“Because he’s the hero that Gotham deserves, but not the one it needs right now… And so we’ll hunt him. Because he can take it. Because he’s not a hero, he’s a silent guardian, a watchful protector…A Dark Knight.”

Related Topics:batmanIkhlaasSinceritythe Dark Knight
Up Next

Deeper Than Any Translation: Reflecting on the Words of Allah in Tarawih