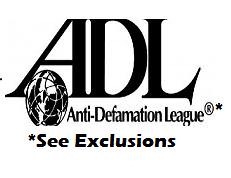 In what has startled many in the mainstream media, not exactly known for being kind to Muslim causes, ADL (Anti-Defamation League), the premier Jewish civil rights organization in America* has joined the ranks of bigots, Islamophobes, and opportunistic politicians in coming out against the Cordoba House, or what is being referred to as the “Ground Zero Mosque”. ADL is in the proud company of some racist tea-party members, Newt Gingrich, Sarah Palin, Rick Lazio, FOX News and a host of other haters.

The ADL statement can be found here, with the following widely mocked para (talk about bad logic):

Proponents of the Islamic Center may have every right to build at this site, and may even have chosen the site to send a positive message about Islam. The bigotry some have expressed in attacking them is unfair, and wrong. But ultimately this is not a question of rights, but a question of what is right. In our judgment, building an Islamic Center in the shadow of the World Trade Center will cause some victims more pain —unnecessarily — and that is not right.

As in the article that I co-authored with Mohamed Elibiary, leading the Cordoba House initiative are people who are well known in the New York community, so this cannot be anything except pure bigotry that is fueling the anti-initiative “haterade”.

Of course, the fact that the mosque is nowhere near being AT Ground Zero has been completely lost on the bigots, though it still begs the question, “EVEN if it were on Ground Zero, so what??” In fact, there was a prayer space right WITHIN the World Trade Center Building and that “on any given Friday upwards to 1,500 Muslims pray[ed] Jumu’ah [Friday prayers] at the World Trade Center”.

Back to ADL: Even recognizing the fact that its director, Abraham Foxman has become a firm peg in the Israeli Lobby (making ADL far more political than it was ever intended to be), even considering Foxman’s desire to label everyone who is against Israel’s occupation as being anti-Semite (former President Jimmy Carter’s book on Israel was anti-Semitic), it is still surprising that an organization that prides itself in its history of civil rights defense, can have an official declaration that sides so openly with bigotry. One can only assume that Foxman has dug the pro-Israeli dagger so deep into the psyche of this famous civil rights organization, that  ADL now sees all Muslims as simply “more Palestinian supporters”, making any initiative that gives Muslim more say in American life as being a potential danger for Israel’s Lobby, and hence an effort that must be killed.

What is also interesting about the story is the number of voices that have come out strongly against ADL, which must have surely surprised the organization which is probably used to seeing unquestioned support from the mainstream media. Even the famous Paul Krugman broke from his “usual beat” to call the ADL statement, “Shameful — and stupid”. Krugman reminds the Jewish organization that it is “Bad for Jews“,

Gawker calls the statement “pathetic”, summing it up like this” ‘Some’ opponents may be bigoted enough to believe that a Muslim community center two blocks from Ground Zero is offensive, because Muslims = 9/11. Well, the bigots should win anyway! Productive day at the office, ADL.”

Adam Serwer reminds ADL that such a statement, which he believes would never have been issued if “the building in question happened to be a synagogue, and the builders happened to be Jews”, is “increasingly eroding its already weakened credibility as a nonpartisan organization”. Joshua Holland at AlterNet agrees saying that the group is on a “journey to irrelevance.” Greg Sargent at Washington Post’s Plum Line doesn’t mince any words either when he says that ADL has effectively sided with bigotry, “On this one, you’re either with the bigots or you’re against them. And ADL has in effect sided with them.”

Lest we negatively paint all Jews with this wacky ADL statement, let’s remember that Krugman, Holland and possibly Serwer (quoted above) are all Jewish, and so is the political Jewish organization, J Street, whose President issued a statement in support of the Cordoba Initiative. Quite ironic, isn’t it, considering that J Street is not the “civil rights organization with nearly a 100 year history”?!

We would hope the American Jewish community would be at the forefront of standing up for the freedom and equality of a religious minority looking to exercise its legal rights in the United States, rather than casting aspersions on its funders and giving in to the fear-mongerers and pandering politicians urging it to relocate.

CAIR has asked ADL to retract the statement, but I am not holding my breath for that to happen!

Founded in 1913 by the B’nai Brith, the ADL was created in response to the conviction of Jewish businessman Leo Frank, who was found guilty in the murder of a 13-year-old girl in a case many said was a racially-motivated miscarriage of justice. Frank was kidnapped from prison and lynched by a mob in 1915.

The group today describes itself as “the nation’s premier civil rights/human relations agency.” The group “fights anti-Semitism and all forms of bigotry, defends democratic ideals and protects civil rights for all.”