It’s been a while since I’ve had a 6:30am tajweed class, about one year exactly. This time around, we’re on to the characteristics of the letters, Shaykh Uthman Khan style for the first three days, Wisam Sharieff style thereafter. 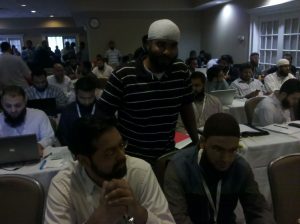 Post-breakfast, we’re in with Shaykh Yasir Qadhi for a reading from Tirmidhi’s Kitab az Zuhd. One of the ahadeeth that began our discussion was the saying of the Prophet (SAW), “Indeed, there is a fitnah for every Ummah, and the fitnah of my ummah is wealth.” Makes you wonder how much wealth, and our need to preserve our wealth, or even to display it, has handicapped our social and political priorities.

Sects in the City: Heresiology

This is starting to look a lot like last year’s Ilm Summit, but with new topics. The heresiology courses are made up of academic material put together by Shaykh Yasir for the more advanced students. The goal of these classes is not what one might guess (refutation). Instead, Shaykh Yasir’s goal is to provide context and understanding for the various movements that have occurred in Muslim history, and engender greater tolerance and compassion when dialoguing and dealing with people of such groups. Due to the nature of the course content, I can’t say much more than that (sorry folks!).

New Order: al-Bid’ah and Its Rulings

Rounding out the weekend lineup was Shaykh Waleed Basyouni’s course “Al Bid’ah and Its Rulings in Islam”. The class is largely a survey of al-Shatibi and Ibn Taymiyyah’s discussion and analysis of the topic. It’s an old topic for me because I’ve been around the block on this one a few times, but the reminder benefits the believer, right? Alhamdulillaah, it was fun discussing bid’ah hasanah from the linguistic vs shar’ee standpoint. Brought back memories of many a forum debate (may Allah protect us from useless online debates, ameen!).

Up to this point in my Islamic studies education, my book learning has come from heavy hitter writers, while my live classes have been from advanced students of knowledge who are, for all intents and purposes, myshuyookh. This Ilm Summit is all about our teachers teachers, a good innovation in the AlMaghrib pattern, if you ask me.

Our first elder scholar was Shaykh Salah as-Sawi, covering the fiqh behind daw’ah work and activism, elaborating on the constants and the variables in these fields, constants being what was ijma’ and would not change over time, and variables that were subject to ijtihaad and could not be criticized if the methodology for deriving the ruling was valid.

The greatest benefit from this class was simply the knowledge of the rulings themselves, but the manners Shaykh Salah displayed, always smiling, and the manners he taught us to have with others with whom we disagree, be he layman or scholar. 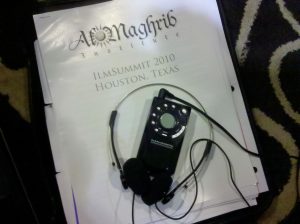 Of course, the class was in Arabic, so Shaykh Salah’s staff from shariahacademy.com provided us with headphones, and Shaykh Mamdouh translated all the shaykh’s words in real time. I have to admit, that was more professional than I had been accustomed to, and I hope insha’Allah to get more classes and translations from Shaykh Salah, insha’Allah.

A New Hafidh Minted Into the Fold

Sister Julie Lowe, one of our top, if not the top Ilm Summit student completed her recitation of the Qur’aan to Shaykh Uthman at the class, having memorized the full Qur’aan in one year while in law school, masha’Allah tabarakallah (seriously, masha’Allah that, no hairy evil eyes). That’s mighty inspirational and a testament to the power of focus, and it reminds myself and others that with grit and determination, we can also get it done, insha’Allah. Shaykh Uthman mentioned she started by memorizing a quarter page daily and moved up quickly until she was memorizing many pages at a time, alhamdulillaah. May Allah give us the focus and the drive to complete our own memorization of the Qur’aan, ameen!