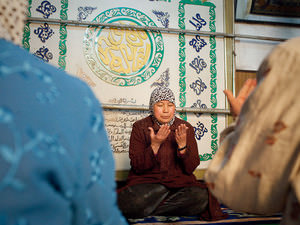 It is 5:50 in the morning, and dark shadows scurry through narrow alleys to the mosque, as the call to prayer echoes from a minaret in Kaifeng. This city in central China’s Henan province has an Islamic enclave, where Muslims have lived for more than 1,000 years.

In an alleyway called Wangjia hutong, women go to their own mosque, where Yao Baoxia leads prayers. For 14 years, Yao has been a female imam, or ahong as they are called here, a word derived from Persian.

As she leads the service, Yao stands alongside the other women, not in front of them as a male imam would. But she says her role is the same as a male imam.

“The status is the same,” Yao says confidently. “Men and women are equal here, maybe because we are a socialist country.”

China has an estimated 21 million Muslims, who have developed their own set of Islamic practices with Chinese characteristics. The biggest difference is the development of independent women’s mosques with female imams, something scholars who have researched the issue say is unique to China.

Yao studied to become an imam for four years, after being laid off from her job as a factory worker. First she studied under a female imam, then with a male imam alongside male students.

Her main role is as a teacher, she says.

“When people come to pray, they don’t know how to chant the Quran, so my job is teaching people about Islam, helping them to study one line at a time and leading the prayers,” she says. 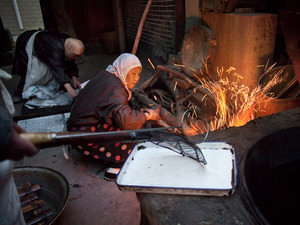 The modest courtyard of Wangjia Hutong Women’s Mosque contains within it the entire history of China’s mosques for females. It’s the oldest surviving women’s mosque in China, with one gray plaque high up on a wall dating back to 1820.

Like other women’s mosques, it began as a Quranic school for girls. These sprang up in the late 17th century in central China, including Shanxi and Shandong provinces. They morphed into women’s mosques about 100 years ago, starting in Henan province.

Remembering her own childhood, 83-year-old Tang Guiying says even then the women’s mosque was the only place a girl could receive education.

“I didn’t go to school when I was small,” she chuckles. “We were all too poor; none of us girls studied. But I came here to play and study. The old imam was very, very old — she was 80-something, and she had bound feet.”

Tang is sitting in the mosque’s washroom as she talks. This is where women conduct ritual ablutions before prayer. This space — and the mosque itself — doubles as a social center for these women, the heart of a community.

In Kaifeng, there are 16 women’s mosques, one-third the number of mosques for males.

Shui Jingjun, of the Henan Academy of Social Sciences and co-author of a book on the phenomenon, says that so far there are no women’s mosques in other countries. In most of the Muslim world, women pray behind a partition or in a separate room, but in the same mosque as men.

Shui points out that the women’s mosques in China are administered independently, by women for women, in addition to being legally separate entities in some cases.

“After reform and opening up [in 1979], some female mosques registered independently, which shows the equality of male and female mosques,” she explains.

Controversy still rages in the Muslim world about whether women can be imams. In 2006, Morocco became the first country in the Arab world to officially sanction the training of female religious leaders. 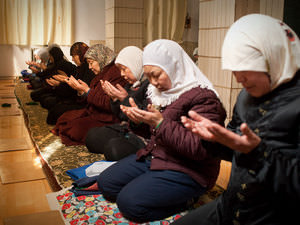 China is the only country to have such a long history of female imams. However, there are things that, according to the customary practices of Chinese Muslims, female imams can’t do.

Forty miles away in the provincial capital of Zhengzhou, white-sashed mourners wail as they process through the streets carrying the coffin from a mosque. No female imams are participating.

In central China, most Muslims support the female mosques, but there is some resistance closer to China’s border with Pakistan and Afghanistan, closer to the harder-line Wahhabi and Salafi influences.

“Historically in northwestern China, there were no female mosques,” says Shui, the researcher. “There was resistance because people thought that building female mosques was against the rules of religion. But in central China and most provinces, people think it’s a good innovation for Islam.”

In the past decade, some women’s mosques have been established in northwest China. The phenomenon appears to be spreading, helped politically by the Islamic Association of China, a state-controlled body that regulates Islam and issues licenses to practice to male and female imams alike. 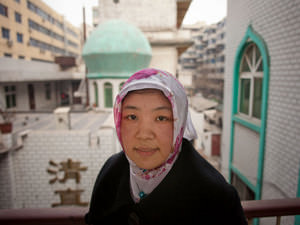 This is part of the anomaly that is religion in China — the atheist Chinese authorities are endorsing a practice some Muslims find unacceptable.

While there is broad support among Kaifeng’s Muslims for female mosques and imams, there is also some opposition.

“The education of Islamic women is a very important job,” says Guo Baoguang, of the Islamic Association of Kaifeng. But he admits that he has been criticized for organizing religious education forums for Muslim men and women to take part in together.

“There were some criticisms that women ought to be in the home, and ought not take part in social activities. I think these criticisms are too conservative, and don’t account of the importance of women’s education in Islam,” he says.

Guo believes that when it comes to female imams, China is leading the way.

“Given the fast development of China’s economy, and as its political status rises, I think Chinese Islam will become more important in the Islamic world,” Guo says. “The developments Chinese Islam has made, like the role played by Chinese women, will be more accepted by Muslims elsewhere in the world.” 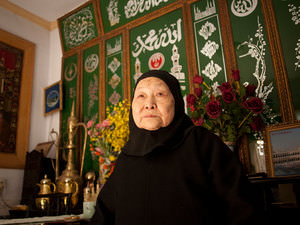 In the women’s mosques, most of the faithful are elderly. Young women with families often don’t have the time to worship, especially given the lengthy purification rituals several times a day.

Third-generation imam Sun Chengying, who has been practicing for 21 years, worries about the future.

“I haven’t had any students since 1996,” she says, shaking her head. “Women don’t want be imams anymore, because the salaries in the mosques are too low. No one is willing to do it.”

Female imams sometimes earn as little as $40 a month, one-third of what can be earned in other jobs. Younger women need to earn more to support their families.

And so it appears the future of female imams in China is threatened — not by the state, not by resistance from inside Islam, but by the forces of market economics.

Refugee’s baby thrown like ball into the sea; story told to award-winning photojournalist