A letter from an unbelieving king; a promise of protection and a good life. 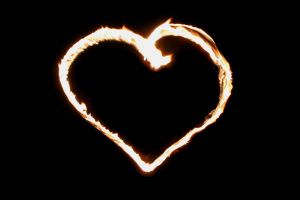 His brothers in faith; turning away, no words, no greetings, no promises.

Then I took the letter to the oven and made a fire therein by burning it.

Without second thought, the king’s letter was burned. His brothers were given precedence.
He could have decided to go and ‘stick to his principles’. After all, the king did not ask him to abandon his religion, it was a brief invitation to move to a place where he wouldn’t feel ‘inferior’. Or he could have decided to take it home, carefully contemplate the offer, and then reach a final decision. Aside from rejecting it, he could have kept the letter merely for its royal origin.

But our beloved companion knew otherwise. He knew that this was a fitna, a great one, for his faith and his allegiance to the Muslims.
His loyalty remained with the believers, for whom the sincere ones grant their love and allegiance. Everyday application of ‘aqeedah (creed) was the way of the companions, whose fiqh (true understanding) of the fundamentals of Islam shone in their actions.

Facing some sort of hardship from our fellow Muslims, should not lead us to give up on them. They are most deserving of patience, and not preferring others over them even if they allure us with kindness.

“And keep thy soul content with those who call on their Lord morning and evening, seeking His Face; and let not thine eyes pass beyond them, seeking the pomp and glitter of this Life; no obey any whose heart We have permitted to neglect the remembrance of Us, one who follows his own desires, whose case has gone beyond all bounds.” (al-Kahf 18:28).

Such is true manifestation of walaa to the believers. How is it that one can turn away from those who share the strongest ties of kinship in faith?

“Your ally is none but Allah and [therefore] His Messenger and those who have believed – those who establish prayer and give zakah, and they bow [in worship].” (Al-Ma’idah 5:55).

In instantly burning the letter, Ka’b (radhiAllahu anhu) was an example of hastiness in ridding ourselves from all means that lead to corruption in deen.
Burning the letters and cutting the ropes pulling us toward misguidance is a step to being saved from the eternal Fire. Every link between us and the prohibited should be terminated, thereby disallowing any chances for the whispers of shaytan. The truly determined ones are those who do not allow the juice to ferment, as Ibn Al-Qayyim so eloquently symbolized. The more one permits means of temptation to remain in their surroundings the more they are at risk of poisoning their faith.

Prophet Sulayman (alayhe asallam) was one whose example of cutting off ties with that which distracted him from the remembrance of Allah was mentioned in the Quran.

And to David We gave Solomon. An excellent servant, indeed he was one repeatedly turning back [to Allah].
[Mention] when there were exhibited before him in the afternoon the poised [standing] racehorses.
And he said, “Indeed, I gave preference to the love of good [things] over the remembrance of my Lord until the sun disappeared into the curtain [of darkness].”
[He said], “Return them to me,” and set about striking [their] legs and necks. (Saad 38:30-33).

When the racehorses diverted  him from the ‘asr prayer until the sun had set, he slaughtered them all to reprimand himself for allowing them to distract him. For the sake of emphasis, you have just spent hours washing, waxing and adding classy accessories to your luxorious car. You stand back to admire your efforts for a moment, but your joy is cut short when you look up to find the sun setting while you were heedless to prostrate to your Creator in fulfillment of your obligation.  Would your prized car be pledged for charity on the spot? Although not obligatory to do so, it is an illustration of the importance of remaining alert to that which diverts from the five daily prayers.
Allah (subhanahu wata’ala) warns us:

O you who have believed, let not your wealth and your children divert you from remembrance of Allah . And whoever does that – then those are the losers. (al-Munafiqun 63:9).

As soon as Allah blesses and guides us to realize that a certain path leads to sin, our immediate response should be blocking all access to it, particularly if it lies in the proximity of our homes, of close reach to us and those living with us. Otherwise, it will keep tempting us until we eventually submit to its calls, except whomever Allah has mercy on.

From the incident of the king’s letter, there is a lesson in being extra cautious of wolves who take advantage of the lone sheep. There are those who prey on believers in their moments of weakness and despair, calling them to their way and ultimately leading them to their own ruin. This is of particular importance to our youth, who may find themselves wandering alone in the fields of temptation and immorality. Such wolves may appear disguised in sweetness and friendship, like the king who attempted to take advantage of the weakness and loneliness of Ka’b. Hence the need for Muslim youth to associate in the company of the righteous, who encourage one another towards virtue, forbid one another from treading the paths of temptation and strengthen one another’s resolve in the face of the trials of this life.

If we turn to the example of the Prophet (sallaAllahu alayhe wasallam), it will be of no surprise that burning the letter was Ka’b’s response. The example before his eyes was a courageous one of strong resolve. He (sallaAllahu alayhe wasallam) refused to be coaxed by his people into accepting vast wealth, lofty status and beautiful women as a ‘reward’ for giving up the faith he so deeply loved and so earnestly strove for.  Allah commanded him,

Then do not obey the deniers. They wish that you would soften [in your position], so they would soften [toward you]. (Al-Qalam 68:8,9)
His (sallaAllahu alayhe wasallam) only response to the allurement of his people was:

“”I am not more able to abandon this (course) for you, than you are to light up a flame for me from the sun.” (Recorded by Al-Albani in As-Silsilah As-Saheehah)

Just as Ka’b followed in the footsteps of his beloved, be among the strong-willed, who do not allow a temptation of this temporary life to unravel works of  previous good, done seeking the pleasure of their Creator.

But, along with your determination, most needed is Allah’s help and guidance to keep your foot steady and your heart firm. Like the Prophet (sallaAllahu alayhe wasallam), we too must supplicate:

O Controller of the hearts, make my heart adhere firmly to Your religion.

Abasa – A Frown That Went Unwitnessed