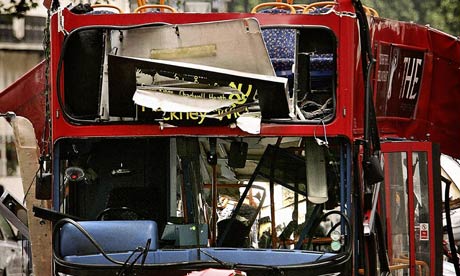 I was travelling from upstate New York to Long Island when I heard about the London bombings. At the time, the news didn’t mean anything. I assumed it was just one bomb in some remote area of London. But of course, no area of London can be called remote. It wasn’t until I came near a TV that I saw the full magnitude of what had happened. Four separate bombs had gone off in different areas of Central London, all very congested and highly populated areas. Even then, seeing it on the TV screen whilst I was sitting thousands of miles away on holiday, I could not comprehend the full scope and magnitude of the situation. I could not understand what was to come. Or how the fate of Muslims was to change so drastically.

I watched CNN and FOX News with contempt…as they were focusing on was how America could be affected, nothing on the where, what and how. Switching to BBC World News, I finally found something substantial to watch. Still, I did not fully comprehend the profound effects and ramifications of the bombing that were to come in British society. Perhaps it was due to my lack of understanding or the distance between London and New York. My parents were worried, not just because members of my family work in Central London, but also because I was due to start my degree at university that year right in the centre of London and I would have to travel on the Tube daily. Naturally, their feelings were understandable.

That day came and went and I began my first day at university with excitement, stress, and the joy of making new friends. It wasn’t until 7th July, 2006 came around that I truly felt the magnitude of the previous year’s events. I watched the memorial for the 56 people who died that day…and it was then that the tears flowed. I cried. I wept. The tears gushed for the people who had died. For their families who were suffering without them. But most of all, for the Muslims and for what was to come. I knew that it was going to be an uphill struggle for us all from now on. So how do I feel 5 years on? I’m not quite sure. Yes, it has been an uphill struggle for Muslims in the West. But has it been as tough as I thought it would? No. But then that’s relative. How do I feel about 7/7 now? I still feel the horror and the shock when I go to Russell Square and Edgware Road. And it’s not like there isn’t something to remind me at the Tube stations either. I feel like my beautiful hometown has been tarnished…like someone broke it. But not just that, I feel like the Muslim community in London has become divided as a result of it all. And it hurts.

I just wish I could find the glue for it.

I pray that Allah (swt) reunites us all and gives us all hidayah. May Allah (swt) bestow His Mercy on us all. Ameen.