Many of you must have heard about the recent move to boycott Facebook by a portion of the site’s Muslim users. Proponents of that strategy felt it was the best way to make themselves heard and voice their disapproval of Facebook’s decision to let defamatory pages aimed at the Prophet

stay on the site, despite the insulting content that was being shared on those pages. However, others felt making a big fuss and simply shutting ourselves off from Facebook were not the best strategies to adopt – rather, there was a need to address the core issue: why do many in the world seem to perceive the Prophet (pbuh) in a negative light? Don’t they know him?

Exactly. They don’t know him. And we Muslims, the great majority of us, have not exactly been telling the world either. Rather, many of our cultural traditions and even daily habits contradict the Sunnah, thus giving the world a very distorted version of our beautiful Deen and the Messenger who was Allah’s

A group of British Muslims realized that there was an urgent need to go out and make it known to common people on the street, who the Prophet

really was. The result? The launch of the “Inspired by Muhammad” website and campaign on 7th June.

Explaining what inspired them to launch their campaign, the Exlopring Islam Foundation (EIF) says, “The website is designed to meet the need the YouGov poll highlighted for accessible information: 60% percent of people say they don’t know very much about Islam; 31% say information about Islam is not very accessible; 33% would like to know more about Islam and just 3% say they get their information from Muslim organisations.” In many ways, this latest campaign is an extension of the Exploring Islam Foundation’s (EIF) own vision for British Muslims and the Ummah.

It’s simple. A neat and eye-catching website design with information displayed in a prominent and lucid manner. Misconceptions that are common among the British population are addressed by means of asking direct questions or making catchy statements like, “I believe in protecting the environment. So did Muhammad.” The website also features several British Muslims who’re active, educated and pursuing mainstream careers – in other words, they’re active members of the British public, underlining the idea that being British and Muslim are not mutually exclusive at all. 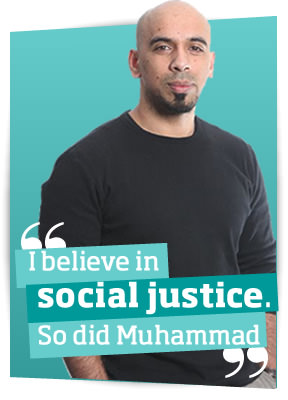 Kristiane Backer, a revert and TV presenter who launched the campaign is also one of the personalities featured on the website, reflects on the negative image Britons have of Islam: “This negative image is the reason for the need of a campaign, the reason for coming out with some positive news, reflecting the truth and showing what Islam is about. Values of compassion, peace, mercy, women’s rights, social justice – these are all part of Islam.”

The campaign is not limited to just the website. The actual goal is to reach out to the common man or woman on the street in a more direct way, through advertisements and banners in prominent places such as bus stops, tube stations and even on the trademark London cabs! American Muslims will of course be able to relate to it through their own Why Islam campaign that has placed intriguing billboards on the NY subway inviting Non Muslims to learn more about Islam.

What I personally love about this initiative is the proactive step they’ve taken where it is needed the most. It is one thing to raise a hue and cry about the latest defamatory gimmick a couple of non-Muslims may drum up (thus giving them loads of free publicity too!) but it demands a whole other life vision and outlook to actually take positive steps. This is not about letting your anger flare for a while and then go turn the other way when Da’wah is really needed… rather, it’s about working hard, actually doing something to make a difference and spread the message of Islam.

was intelligent and employed wise strategies that had long term goals in mind to bring benefit to the community. Perhaps it is time we start doing the same. Alhumdolillah, the people behind the “Inspired by Muhammad” campaign, and many other such projects across the globe, are leading the way – may Allah (swt) support their efforts and reward them! Ameen.

(Author’s note and acknowledgment: Readers of Muslim Matters are invited and encouraged to share local initiatives, such as the Inspired by Muhammad campaign highlighted above, with us. This story was brought to MM’s notice by our Staff writer, iMuslim and MM reader, Muhammad Ali Yaqoob. JazaakAllahu khayr to both!)

After the Takbir: Advice to a Muslim Convert

Who is Jesus? An Interfaith Discussion