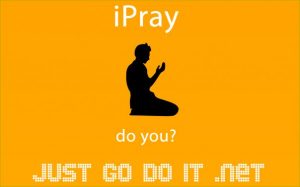 I’ve recently joined a new scheme that has been launched in the UK by Al Kawthar Institute’s parent company, Mercy Mission, to emphasise the importance of salah. This proposal has been designed by Mercy Mission in order to invite the Muslims who have lost the desire to pray to restore themselves in this great act of worship.

In the words of our beloved Prophet (sal Allahu alayhi wa sallam), a person who rejects the obligation of prayer completely has left the fold of Islam according to the following hadith:

“Verily, between man and polytheism and disbelief is abandonment of the prayer.” (Muslim)

The media campaign run by Mercy Mission is ambitious, but incredibly impressive. With advertisements running across London’s transport network, Asian/Desi lifestyle magazines and high street billboards in Birmingham and Manchester, I jumped at the chance to join the campaign at Al Kauthar’s December sell-out course, Coolness of the Eyes – The Fiqh of Prayer 101, held in London.

Before I continue, let me first tell you about Mercy Mission. The aim of Mercy Mission is to provide a platform for Muslims to play an active part in their local communities in order to convey a beautiful and peaceful message of Islam. Their approach has been defined by their vision of displaying the beauty of Islam, which has subsequently attracted a number of professionals thereby strengthening the infrastructure of Mercy Mission to enable meaningful contributions to made in local communities.

Some of their current projects are:

This is just skimming the surface. Even as you read this, Mercy Mission is working on ways to develop and improve the services given to the Muslim community whilst maintaining the true message of Islam.

Just Go Do It is Mercy Mission’s latest project and so far, it seems to be doing pretty well with an impressive website and a thought-provoking video with all the wheres and whys of salah. But amongst that shiny exterior lies the inner workings of a multi-talented set of Muslims.

The aims of Just Go Do It are high, but very simple. We may have noticed amongst our friends and families that some of them do not pray or that there is a lack of knowledge about prayer in our local communities. Part of that is due to inadequate education of the deen, particularly about prayer, even though great emphasis has been placed on halal meat and avoiding alcohol. SubhanAllah, salah is far more important than those two issues and, it seems, Mercy Mission wishes to do something about it.

To address these problems, Just Go Do It was created to provide a platform for the attendees of Coolness of the Eyes to go out and teach at their local masjid and Muslim community centre using a compressed version of the course notes.

Therefore, the media campaign has enabled the likes of myself to teach local sisters in my city about the importance of salah and how to perform it. In fact, I just taught my first session and it seems that several things were highlighted whilst I was teaching. Some sisters haven’t been taught how to pray, whilst some didn’t even know that the salah is a pillar of Islam. Not only was it an eye-opener for the class attendees, it was almost a revelation for me with regards to the state of the Ummah.

Just Go Do It is already running in several cities across the UK, including London, Birmingham, Nottingham, York and Luton. The class locations and timings can be viewed on their website, which, might I add, has their promo video showing why it is better to pray before you are prayed upon. As chilling as it is, it proves to be a true reminder of why Allah (subhana wa ta’ ala) has placed us on this Earth:

It is understandable as to why I jumped at the chance to get involved. A priceless opportunity to reap some rewards by passing on knowledge about the fundamentals of Islam? Absolutely!

With the aim of bringing back the establishment of salah by reaching out to, at the very least, 100,000 non-practicing Muslims, this is an immense opportunity for anyone who has been touched by the campaign to further the knowledgeable fruits of their labour in the akhirah.

Mercy Mission has many worthwhile projects which require the involvement of committed Muslims, all of which will make our lives performing da’wah just that little bit easier with the sole purpose – showing the true beauty of Islam.

I pray that this knowledge is passed on through the generations of every Muslim that has been taught to perform and perfect their prayer through this campaign.  Ameen.

The Ease and Simplicity of Islam

Dawah: You missed a spot!

From The Chaplain’s Desk: Prophetic Training In Sacred Activism

Harnessing The Benefits Of Intermittent Fasting

The Top 10 Logical Fallacies for Muslims