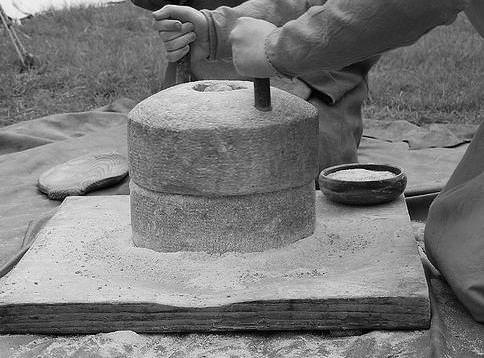 Seldom is it that anyone looks forward to tackling a sink-full of dirty utensils, a hamper load of laundry, a sprawling lawn overflowing with tall grass, or a wall-to-wall carpeted house waiting to be vacuumed. Household chores are just that – chores – and most of us would happily delegate them to someone else if we could.

These chores do take up a considerable amount of our time and energy, though, since most of us tackle them ourselves. Consequently, often it is easy to fall into the trap of perceiving them negatively as simply a waste of time, or a burdensome “headache” to rid ourselves of as soon as possible.

The hadith below brings us glad tidings:

It was narrated from ‘Ali [رضى الله عنه], “Fatimah [رضى الله عنها] complained about the pain caused to her hand by the mill, and some prisoners had been brought to the Prophet [صلّى الله عليه و سلّم], so she went but did not find him, but she met A’ishah and told her.

Al-Tabari said in his commentary on this hadith:

“We may understand from this hadith that every woman who is able to take care of her house by making bread, grinding flour and so on, should do so. It is not the duty of the husband if it is the custom for women like her to do this themselves”.

A servant is a person who helps us do our work at home. He or she obeys orders and makes our tasks lighter. Good servants are indeed hard to come by, but when they do, they are a great blessing indeed.

However, Fatimah bint Muhammad was a very special woman. She had a short lifespan, which she spent in poverty and considerable hardship; yet, despite not having lived a very long life, she won the highest spot in the Akhirah, and we all know it was not just by virtue of being the Prophet’s daughter, because the blood connection will not get us anywhere unless it is accompanied by virtuous deeds.

Prophet Muhammad [صلّى الله عليه و سلّم] always advised Fatimah to adopt the “high road”, even in matters as seemingly ‘trivial’ as domestic work. Whilst it is true that this hadith by no means implies that keeping a servant to help out in housework is in any way frowned upon in Islam, the Prophet was actually pointing out to to his daughter that it was better for her to turn only to Allah for relief from her physical fatigue, than to seek out tangible, worldly means to relieve her tiredness from her daily work.

Remembrance of Allah, in the form of takbeer [“Allahu Akbar“], tahmeed [“alhamdulillah“] and tasbeeh [“subhan Allah“] takes very little time to actually do with the tongue. However, dhikr has many beneficial advantages on the soul of a person when s/he recites these adhkaar with concentration, whilst keeping in mind the depth of their meanings.

For example, each time we recite Allahu Akbar, we can think about Allah’s majesty and how he provides the solution to all our problems; each time we recite Subhan Allah, we can bring to mind the universe and the flawless creations and systems it contains; and each time we recite Alhamdulillah, we can think of one of Allah’s countless blessings upon us, such as our hearing, sight, limbs, intellect, health, food, drink, shelter and family. Now, after just 2 minutes of doing this (the prescribed dhikr takes no more than 2 minutes!), wouldn’t a humble servant feel relieved of the stress and fatigue caused by household chores?

Another point to note is that Fatimah bint Muhammad [رضى الله عنها], who is the leader of the women of Paradise, also ‘complained’ of housework. Her hands were becoming calloused because of grinding flour in the mill herself. When she heard of her father recieivng prisoners of war, she proactively tried to get one as a servant for herself.

This shows us that it is not blameworthy to complain when there is cause for it viz. when the work/toil is causing considerable physical injury or fatigue. Even Prophet Musa [عليه السلام] exclaimed to his servant whilst travelling to find Khidr:

“Bring us our breakfast. Verily we have found fatigue in this journey of ours!” [18:62]

Therefore, to complain with just cause is not a sin at all.

Next, we get to see the concern and love that Prophet Muhammad [صلّى الله عليه و سلّم] had for his daughter. When he discovered that she had come enquiring after him, he went to visit her himself.

This is a very inspiring incident from the lives of our Prophet’s [صلّى الله عليه و سلّم] family members. Aside from the main lesson gleaned from it, especially for homemaking women of all ethnic backgrounds, who spend a significant portion of their day doing housework and chores, there are several further points of interest that can be pondered upon:

Last but not least, let not our Muslim brothers think that this hadith gives them the proof to deny their wives the right to hire domestic staff for help with household chores. It is every woman’s duty to maintain a clean and smoothly-functioning household; most women happily go the extra mile in doing the cooking and cleaning that ensures the health and happiness of their families. However, in cases where they genuinely need it, they should be allowed to hire help to keep mental and physical stress at bay, especially during the repeatedly trying phases of being in the family way.

For more information on how much work women should be made to do in their homes, please see: The Wife Serving Her Husband on IslamQA.com.

5 Steps Towards a Noble Life ….. On the Fingers of Abu Hurayrah