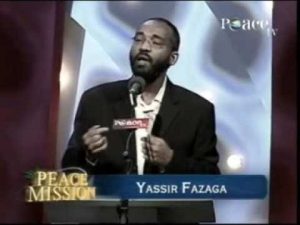 This post is unique in the sense that it is not one of those “hot” topics that we all love to blog/comment about simply because its all about individual implementation (“walk the walk) with our families, our brethren, and with humanity at large.  Also, it is a topic I feel needs more emphasis in our institutions, our masaajid, and our study circles, as far too often we run into “dead ends” due to our lack of proper character.  Moreover, I see good character as a true reflection of our faith and worship, it is sort of a litmus test for our faith.  That is why we see in some of the Prophet’s sayings where faith and good character are directly coupled to describe complete faith.   Finally, as our beloved Prophet (saws) informed us, “those of you closest to me on the day of Judgement are those of you with the best of manners (akhlaq)”.  May Allah ta`ala grant us all this noble station of good character.   Ameen.

What follows is “an edited” transcript of Shaikh Yasir Fazaga’s lecture entitled, “The Six C(s) of Good Character”.  The transcript is taken from a conference aired on Peace TV, the video feed of the lecture is available on Youtube and the links are cited in the article.   Please note the following items with regards to this post.

Yassir Fazaga is an inspiring, multi-lingual speaker sought-after from USA through Canada to the Middle and Far East. He was born in Northeast Africa and moved to the United States at the age of 15; has a Bachelors Degree in Islamic Studies from the Institute of Islamic and Arabic Sciences in Virginia; has completed all coursework for his Masters Degree in Marriage and Family Counseling from the California State University of Long Beach; is currently undertaking his Masters in Theology at Loyola Marymount University.

He is involved as a therapist at FACES, where he helps families with different challenges in life which include: domestic violence issues, communication problems, marital matters, generational gap, difficult teens, some mental and personality disorders, divorce, grief, and single parenting, among others.

Yassir Fazaga has taught the Arabic language and Islamic Sciences for the past 8 years and has taught Islamic courses on Scriptural Exegesis, and Islamic financial contracts for American Open University.

The Shaikh begins by praising Allah and sending blessings upon the Prophet (saws) and makes du`aa.

And before we delve into this, please allow me a few minutes to take you on a very short journey as to what the teachings of Islam are to be like.

So it is a circle that is made up of these four vital components.  A set of beliefs you must practice them in a set of rituals, these rituals must impact your behaviour and your character, and your character is shown as you deal with other people.  And by the way, any missing link in this chain is not acceptable.  A person may have good ibadah (worship) but they have no good akhlaq (character/manners) and that is the case nowadays.  With Muslims, you have people who are excellent in doing rituals, but they are very rude, they are very loud, and they are just not pleasant to be around.  You have another group of people who are very nice, they are very calm, it is easy to get along with them, however they have no proper relationship with Allah.

Who is better, for a person to have (what it seems to be a good relationship with his/her Creator) but has a terrible relationship with the creation or somebody who gets along well with creation but has no proper relation with the Creator. Who is better? This is like asking, which one do you want me to take away from you, your right eye or your left eye, I would say neither.  So similarly, we cannot say that I have a proper relationship with Allah but I don’t care about people, it does not work out that way.   And that is why this link is very important, nothing within it can be missing.  But the Quran tells us the following:

If you have, and listen to this carefully, if you have excellent ibadah (worship), but terrible akhlaq (manners/character), your ibadah will not make up for the deficiency in your character.  This is a very important point. However, if you have excellent akhlaq and decent ibadah, your excellent akhlaq may make up for the deficiency in your ibadah.  Somebody says I need proof for this, we must have proof for this, this is a big statement, what is the proof of it?

In a hadeeth, the Prophet (saws) was informed about two women. One woman, they said, she prayed a lot, she fasted a lot, she did all her voluntary acts of worship, but she was extremely rude to her neighbors.  The Prophet (saws) said, if she continues in this lifestyle, her final abode shall be the hellfire.  And then he was told, O Prophet of Allah, there is another women, she does not pray much, she does not fast much,  but she only fulfils her obligations, she is excellent and good when it comes to her neighbors. The Prophet (saws) said if she continues that route, her abode in the hereafter shall be heaven. From this hadeeth, the Prophet (saws) is telling us having enough ibadah with excellent akhlaq will lead you to paradise. But never think that because you have abundance of ibadah, that will determine your abode in the hereafter.   This is such a crucial point that we must understand well.

And also it was the sunnah of the Prophet (saws), he would tell people, “aqraba minkum minni majlisan yaumal qiyama ahaasinukum akhlaqa”  (those of you who will be in closest position to me on the day of judgment are those of you who possess the best of character”).

It does not really say much about  praying much and fasting much, (and by the way, we are not undermining too much prayers and too much fasting, this is not what we are talking about), but as we said last night,  it is the idea of priority and being mature in our relationship with Allah and our relationship with the creation of Allah subhaanahu ta`ala.

And also the Prophet (saws) said because of your akhlaq (character), he said, “inna ahadakum layoudriku darajata si`am al qaa`im, that one of you is able to be equal in position with somebody  who is constantly praying at night, with somebody who is constantly fasting during the day, due to his good character.  If you have good character, he said, you are able to reach that rank.

And also finally, the Prophet (saws) is approached by a man who said, Ya Rasoolillah, “awsinee”  (O Messenger of Allah, give me an advise) and the Prophet (saws) said “ittaqillaaha haithu ma kunt, wa attbi`i sayiyatal hasanatu taamhuha wa khaaliqul nas be khulooqil hasan.  He said (saws), “be mindful of Allah wherever you may be, and then he said, after any bad deed, poor choice, do something that is good for it will wipe it away, and then he said, deal with people in the best of manners, have a good character.

See brothers and sister, each and everyone one of us, there are three components into us.  There is our reputation, there is our personality, and there is our character.  Our reputation is what people think of us, and what happens is that most people invest most of our effort in perfecting our reputation.  Why?  Because the effort is very little and the reward is immediate.  All you have to do is just watch a politician, around election time, what do they do?  They want to seem to people that they are kind so they hold an orphan baby and take a picture and if it makes it to the headlines in the first page, they made it.  They are selling an image about themselves.  Watch politicians around the time of elections, you will see them pouring so much money in improving and selling their reputation.  So our reputation is what people think of us.

And then, there is our character, and our character is who we really are.  So reputation is what people think of us, personality is what we seem to be, and character is who we really are. And most do not invest enough in character, we like to invest more in reputation and personality, and not in character and sadly, it is the character that really defines us.  And subhanAllah (glory be to Allah), if you have good character, the other two may come, so having good character the reward may not be immediate.  In fact many times, people with good character may go unnoticed.  In fact, many times, your good character may be a problem for you in this life.  Because you like to deal with people with clarity, you like to deal with honesty, and everyone around you is a cheater and so your goodness, your honesty becomes a problem for you.  So people say what the heck with the character, who cares, all people around me cheat, so we stop investing in our character because investing in our character becomes very problematic.  But subhanAllah, please listen to this carefully.

But the question is, two questions.  What is character? And how do you get good character?

To be continued on Part II.