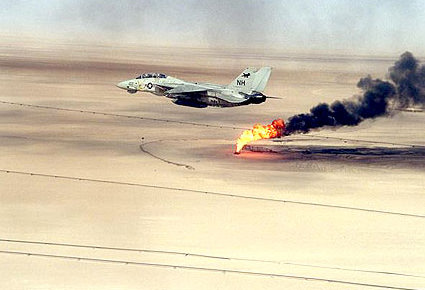 August 2nd, 1990 – It was a beautiful summer morning I wouldn’t soon forget, nor would the rest of the world.  After performing Fajr salaah at our local masjid, Masjid al-Zaahim, myself and a mix of children and teenagers  headed out for an hour-long walk to the beach.

The spot we chose to swim was right in front of the late crown prince Shaykh Sa’ad al-Abdullah al-Subah’s palace, which made for an amazing view since it was adjacent to the famous Kuwait beach towers.  Along with the pleasant weather, it was an amazing day for swimming, and I remember being neck deep in water so crystal clear I could see my feet at the bottom easily.

We didn’t expect the air to be ripped and the ground to be shaken by the deafening scream of military fighter jets flying directly overhead.  We were completely caught by surprise, thinking that some sort of military training exercise was taking place, albeit strangely close to the civilian population.  We quickly realized how wrong we were when we looked at the Kuwait Towers and saw that a missile had been launched at one of them.  Military trucks quickly surrounded the towers and police sirens were blaring all around.  We didn’t yet know it, but the attack was the beginning of the first gulf war.  This is my brief eyewitness account of what happened between August 2nd, 1990 and February 26th, 1991.

Not knowing yet what was happening, we decided to return home immediately. I was in charge of the group and decided it would be best to take a bus home rather than walk as we had earlier. Unfortunately, no bus or taxi would stop for us and after much waiting, we had no choice but to return home walking.

We crossed a street in front of the royal palace and a group of Kuwaiti soldiers came out, pointing their rifles at us and yelling at us to stay away. It was the first time any of us had been threatened in this manner, and the children began panicking, so I had them all hold hands and keep close together.

We followed the main highway leading to the capital and found that the traffic traveling towards the capital was jam-packed despite the great number of lanes. There was almost no traffic moving in the opposite direction. We saw that the police, a man and a woman, had blocked traffic and were re-directing it away from the capital, telling people to stay away.

I called out to the female police officer, asking what was going on. The policewoman turned around and, seeing all the kids with me, burst into tears exclaiming, “What are you kids doing here? Go home now, Iraq has already taken the capital!”

I decided it would be safer to cut through the Kuwaiti neighborhoods rather than take the main roads to return home. The children were scared and crying, and I had to again hold them close to make sure they were alright.

When we finally arrived in our neighborhood Hawalli, we were surrounded by chaos – people were storming grocery stores, stocking up on anything and everything they could carry. I walked each of the children to their homes, mothers upset and crying at the door, happy that their children were safe. They offered to let us stay in their homes until the things cleared up a bit, but after dropping all the children home, I returned home as well.

I was staying with my grandmother, and my older sister and her husband were visiting us, while my parents were in the US. Our biggest concern was my younger brother (17 at the time), who had traveled to Iraq for some shopping and sightseeing. After two weeks, we lost hope in his returning back to us, and we hoped he would be able to cross the Iraqi border into Jordan, but alhamdulillaah, he did return very soon after the conflict began.

The first day was truly nerve-wracking. We could not understand why Iraq, a neighboring and fellow Arab country, would attack Kuwait over something like oil. Apparently there was a dispute over oil production, prices, and oil fields Iraq had against Kuwait, and the dispute had escalated such that Iraq felt compelled to take punitive action. All we could really do now was wait and watch what happened.

Around mid-day, we caught our first sight of the Iraqi army, accompanied by a helicopter prominently displaying the Iraqi flag. It was painfully obvious that the Iraqi army was in control of most, if not all of Kuwait. The Kuwaiti government escaped into Saudia, and by the end of the day the Kuwaiti military was running away in defeat. I saw some of them breaking into a laundromat and changing into civilian clothes in order to escape harm. Using binoculars, I was able to see the palace we were swimming next to earlier that day burning down and I wondered about the soldiers guarding it that had chased us away. None of us could believe what we were seeing, bringing tears to our eyes.

Resistance continued for a few more nights until it was completely suppressed.

Kuwait was a land of religious freedom, and the idea of living under the banner of Iraq’s extreme socialist Baathist ideology was terrifying for many. As a result, many imams left the country as soon as the Jordanian border opened up. By necessity, I became a volunteer imam for the first time in my life.

Sharing the duty with a friend, we maintained the adhaan and salaah in our masjid, even though we were younger than many attending. We also took care of the khutbahs and the general talks, and even led the Taraweeh salaah. Several months into the war, we were able to continue functioning despite the lack of government support for the community.

Using my position as Imam, we were able to coordinate and establish a self-sufficient system based on volunteer effort. We were able to maintain certain necessary community functions such as trash removal (until the Iraqis confiscated our trucks) as well as feeding the needy.

Life continued as mentioned earlier until mid-January of the next year when the airstrikes began. The first night was the most terrifying – we could hear the bombing from far away, our homes would shake from the blasts, and we could see the glow from the blasts in the darkness of night. I stayed up the entire night, unable to sleep from the non-stop shelling. When Fajr rolled around, my mother (who had since returned from the US) initially tried to prevent me from attending the salaah at the masjid, but eventually she capitulated when she saw our neighbor going to the masjid.

I had expected the masjid to be empty, but it was just the opposite – the masjid was packed as though it was Friday jumu’ah and the people were busying themselves with worship and reading the Qur’aan as though the end was imminent. Unfortunately, everything went back to “normal” after a few days, as everyone became accustomed to the airstrikes.

The End of Iraqi Occupation

In the last few weeks of the war, we lived in total darkness due to the destruction of the power grid. We ran out of gas, fuel, and candles, so we used recycled wax from the candles and used olive oil for light. People had to build kilns behind their homes for cooking, using construction wood for fuel. The humanitarian situation continued to deteriorate as the air strikes on the supply lines prevented provisions from coming in.

It wasn’t until February 26th, 1991 that the situation changed. I went out for Fajr and immediately realized something was very different – the air was pitch black with the smell of diesel wafting in the air. I couldn’t see the way in front of me and I had to stumble around in the dark until I found my way to the masjid. After I led the Fajr salaah, someone behind me stated, “Saddam withdrew last night.” A debate broke out between those who were pro-Saddam (actually, it was only one man) and those against him. We decided to investigate the situation firsthand.

We waited until sunrise which took longer than usual due to the excessive darkness caused by the burning oil fields, which puffed out immense clouds of smoke and then caused crude oil to rain everywhere. When we finally left, we discovered that the withdrawal was indeed real, albeit chaotic, and the army could be found on the highways wandering, looking to find their way back to Iraq. Many of them were killed or taken prisoners during this time.

It was not until the end of the day when we saw the first military vehicles from the international alliance enter the area, carrying with them the national flag of Kuwait.

A brown box on the doorstep… Aafia Siddiqui’s suffering enclosed