In stark contrast to Obama’s call for respecting the Muslim women’s right to observe hijab, as well as the lack of any official effort in the United States to prevent a Muslim woman from chosing to wear whatever she wishes to, Sarkozy has launched a frontal attack on the Burka (the hot-button word for full niqaab).

The reference of burka has another dimension to it since that is the common terminology for Afghani-style hijab/niqab, where France has recently sent troops. Thus, building the propaganda of “fighting for womens rights” as a means to justify its unpopular war.

This French President, described in a recent book (failed to be blocked from publication — so much for free speech!) as an uncaring father and a womanizer wants to now tell Muslim women how to dress. I’d like to ask Sarkozy that if he can tell us how we should dress, then under equal rights of the “republic”, why can’t Muslims tell French women how not to dress?  We are even willing to donate some extra clothing material to help the near-nudity on display everyday in this model nation!

For a President to devote significant time to the hijab in an important speech to the Parliament, the first one since the 19th century, is a clear indication that Sarkozy is running out of ideas to save the country from its economic and social ills. By letting the public focus on a clearly divisive issue, but one whose inherent prejudice bonds French citizens across the political spectrum, Sarkozy wants to use this “coalition of bigots” to distract the public from real problems.

This low-level terror against minorities is not a new phenomenon. Historically, other tyrants and dictators have used anger and prejudice against minorities to help their own standing with the people. Hitler used the Jewish people as his whipping-boy. Sarkozy is on the same track, albeit several steps back. But mark my words: if this helps him, he will continue on the path of trying to implement this French sense of superiority over its Muslim minority, to the point that it will cause more fissures between the Muslim community and the non-Muslim majority.

On the path of this “Frenchize” culture would be a ban on beards. Far fetched? Think again. The French government was ready to deny entry of students who wear a beard since beards can be interpreted as a religious sign. This was only rejected because the head of the schools realized that it was too difficult to manage, not because it would be against freedom of religion.

If Sarkozy thinks that he can force the will of the majority over its minority in the matter of dress choice, then he is sadly mistaken, and setting the French society up for a massive clash.

It is interesting that many Europeans fled Europe for America’s shores about three centuries ago to escape religious persecution. While Europe has claimed great progress in freedom of religion, time and time again, we see the rise of religious persecution. It seems that some people can never quite get it right on rights, and Sarkozy is just another stark example of what’s wrong with Europe, and France in particular. 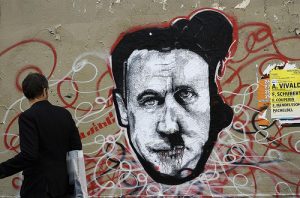 May Allah protect our Muslim sisters from cultural terror and religious persecution wherever it raises its ugly head, and may He protect them and allow them to wear whatever they choose to wear, when done solely for the sake of their Lord.

Why Is The Flap On My Face, A Slap In Yours, Mr. Sarkozy?